By American Lung Association in California 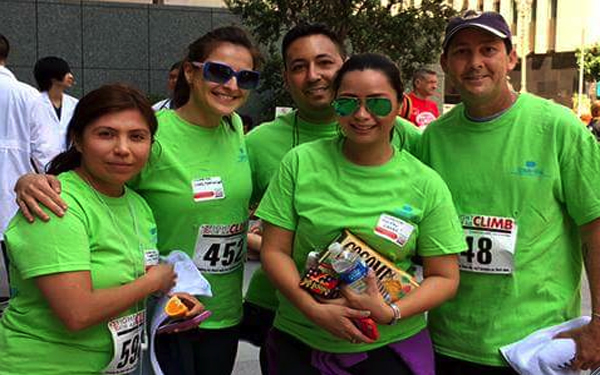 Michael Adams, a double lung transplant patient and Oceanside resident, will participate in the American Lung Association in California 8th annual Fight For Air Climb on April 11, 2015 at the Aon Center to raise funds and awareness for healthy lungs and clean air. This will be the second time Mr. Adams will climb all 63 floors to reach the top of the Aon Center. The Fight For Air Climb is the only event in Los Angeles that challenges individuals and teams to ascend the entire height of the 858 foot skyscraper, the 2nd tallest building in Los Angeles.

“Approximately 1,000 participants will be climbing nearly 1,400 steps to support our mission to improve air quality and prevent lung disease,” says Jill Arnstein, Regional Executive Director of the American Lung Association in California – Los Angeles. “Everyone knows someone who has been affected by asthma, emphysema, lung cancer, or tobacco addiction. The Fight For Air Climb is a great way to bring the community together to improve air quality and lung health as well as prevent lung disease.”

Adams, who suffered from cystic fibrosis since he was a baby, is climbing in honor of his organ donor, Tory Howe Lynch, a 15-year-old boy who had been shot and killed on the steps of his church while waiting for choir practice. “I climb for those who can’t, and because nobody should have to fight for air,” said Adams, who has had a close relationship with the mother of his organ donor over the past 11 years. “She was the first person I called when I signed up for the Climb, and it means a lot to her that I’m climbing with her son’s lungs, which means that a part of Tory also is climbing.”

Adams will climb with his transplant team from Cedars Sinai Hospital, and has even encouraged his friend who had also a lung transplant to join him and step up to the challenge. “Reaching the top of the building was an amazing feeling. I thought back to a time when I sat in a recliner and needed an oxygen concentrator to breath – when I couldn’t take one step without gasping for air. The American Lung Association has made it better for those living with lung disease to breathe easier by advocating policies to keep our air clean, and by providing educational lung health programs.”

Lung disease is the third leading cause of death in the United States, and is responsible for one in seven deaths nationwide. Lung cancer is the nation’s leading cause of cancer deaths in both men and women, taking more lives than breast, colon, prostate, and pancreatic cancers combined. Lung disease is particularly prevalent in California. Nearly ninety percent of Californians live in areas with unhealthy air, contributing to breathing problems for the more than five million of our state’s citizens afflicted with asthma, including nearly one million children.

Online registration is open until 6:00 pm on April 8, 2015 at FightForAirClimb.org. On-site registration will begin at 7:30 am. For more information about the event, the public should contact Maggie Raiken at 310-735-9177 or Maggie.Raiken@lung.org