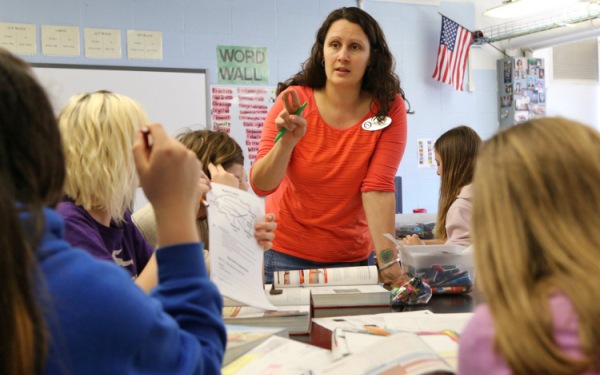 ST. LOUIS — Two years ago, it might have seemed strange when Gov. Jay Nixon starting pushing for Missouri to create its own branch of Western Governors University.

After all, WGU is a bit of an oddity. It’s a nonprofit online university that doesn’t use teachers. Students work at their own pace and are assigned course mentors who offer tutoring, advice or pep talks as needed. Students can also skip large sections of the curriculum if they can demonstrate command of the subject.

After two years and a state investment of $4 million, WGU-Missouri leaders say the school is doing what it’s supposed to do: providing access to students who don’t fit the mold of a traditional student.

Students, they say, are earning bachelor’s and master’s degrees more quickly and for less money.

However, skeptics say the WGU model cheats students out of the one-on-one interactions between teachers and students that typically drive the learning process. There’s also concern that the idea of quicker and cheaper degrees could entice students who aren’t disciplined enough to be successful in WGU’s hands-off approach.

She had an associate’s degree in veterinary technology from Jefferson College that she wasn’t using. Later, as a stay-at-home mother caring for her three children, she opened a day care center at her house.

“I was working 14- to 16-hour days taking care of other people’s kids, and I just finally decided I wanted something more,” she said.

Powell eventually enrolled in WGU, earning bachelor’s and master’s degrees in teaching in a little over three years.

Powell said she liked WGU’s competency-based model, where instead of the traditional A-F grading system, students pass or fail.

“Either you know it or you don’t,” Powell said. “If you are struggling on your assignments, you redo them. They don’t allow you to get by. You have to pass with the equivalent of what would be a B grade.”

Powell is now a seventh-grade science teacher at Valley Middle School in the Northwest School District in House Springs. Powell graduated from the national WGU before Missouri started its own chapter. Missouri’s version has 1,400 students enrolled and has graduated just under 550 students in two years of operation.

A recent Harris Interactive survey of new graduates found that 82 percent of WGU graduates were employed full time, compared with the national average of 77 percent. A Gallup-Purdue survey of students who graduated in the past five years, showed that WGU students were more likely to self-report as engaged and thriving in their jobs than graduates of other schools.

Matching productive people with jobs they can thrive in follows one of the loftier goals in higher education circles: putting a dent in the estimated 36 million Americans who’ve completed some college but didn’t earn a degree.

“We are doing what we were created to do,” said Angie Besendorfer, WGU-Misouri’s chancellor.

Dedicated students, she said, can earn a degree 30 percent more quickly and for half the cost of students enrolled at a traditional four-year university. Rather than offering semesters, WGU is organized into six-month periods, each costing roughly $3,000. Students can take as many classes as they can handle in each period.

But a Washington State study of more than 50,000 students found that those who enrolled in online courses were more likely to fail or drop out of school than students who enrolled on brick-and-mortar campuses. A Columbia University study found similar results.

Both studies dealt with community college students, but the logic translates to four-year schools: Significant numbers of students require a strong connection with their teachers to succeed.

Besendorfer said she didn’t put too much stock in critics who say WGU students miss out on one-on-one interactions with instructors. Students read course materials, watch Web videos and turn in assignments, much like traditional students do. Besendorfer said students who had a good grasp of a course could test out of a course immediately by passing an exam, writing a paper or completing a project demonstrating their knowledge of the subject. Students who struggle can lean on course mentors for one-on-one tutoring, she said.

“This model has been around for a long time,” she said, and has been successful.

With its origins as an economic development engine, WGU isn’t the place to earn a liberal arts degree. Instead, the focus is narrowed to a number of key areas: information technology, business, teaching and health.

WGU is based in Utah, but so far five states have created their own offshoots. Some — including Missouri’s — were started with taxpayer money, but each one supports itself through tuition and private donations. WGU-Missouri got started with a $4 million community development block grant from the state to help with startup costs.

Because Missouri created an affiliate of the national university, WGU spends more marketing dollars here than in other states, WGU officials said. Nixon has appeared in television ads touting the benefits of WGU-Missouri.

As an online-only school, WGU competes with schools such as Kaplan University and the University of Phoenix. But unlike many of its competitors, WGU is a nonprofit. Even so, Chief Executive Officer Robert Mendenhall earns more than $600,000 a year.

As WGU-Missouri produces more data, the school will ultimately be judged on how well its graduates perform on standardized tests, licensing exams and other precursors to employment, he said.

“Ultimately, the purpose of any institution is to help students learn and to get students to be successful,” Monhollon said. “The competency-based model is a proven way for some students to achieve that.”