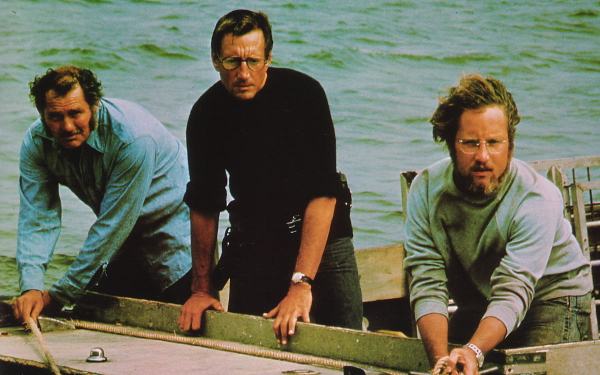 (Credit: Universal Pictures)
Carl Gottlieb met Steven Spielberg through their mutual agent, Mike Medavoy, when the Oscar-winning director was still "the new kid in town" back in 1968.

Gottlieb had already established himself as a performer — he was a member of the popular San Francisco improv group the Committee — and was on the writing staff, along with Steve Martin, of "The Smothers Brothers Comedy Hour" on CBS when he became fast friends with the 21-year-old Spielberg.

Not only did they hang out together, but Spielberg also cast him in small roles in a few of his TV projects and then asked him to play newspaper editor Ben Meadows in "Jaws," the groundbreaking 1975 thriller that ushered in the summer blockbuster and transformed the director into one of Hollywood's major players.

Less than three weeks before production was to begin on Martha's Vineyard, Spielberg asked Gottlieb to help with the troubled script adaptation of Peter Benchley's bestseller about a very hungry great white shark.

Gottlieb imbued the fish tale with quirky humor and brought some depth to the characters, making "them more like everybody instead of caricatures," he said.

On Friday, the Writers Guild will celebrate the 40th anniversary of the blockbuster starring Roy Scheider, Richard Dreyfuss and Robert Shaw at the WGA Theater in Beverly Hills. Gottlieb, who wrote the acclaimed 1975 book "The Jaws Log" on the making of the film, as well as co-writing the scripts for "Jaws 2," "Jaws 3-D," "The Jerk" and "Caveman," will be interviewed by screenwriter David S. Goyer ("Batman Begins"). (The screening is sold out to WGA members, but any open seats will be released at 7:15 p.m. for the general public.)

Even though the Benchley book was a bestseller, "Jaws" was just going to be "a quick summer popcorn movie," Gottlieb, 78, noted in a recent interview in the vintage West Hollywood apartment he shares with an affectionate feline named Frida.

"To everybody who worked on it at the time, it was a job," he said. "Let's do the best job we can with the resources we have. It was not a big-budget picture."

Though, at first, not much respect.

The initial screenplay was written by Benchley, and "The Great White Hope" playwright Howard Sackler was hired for a rewrite, although Benchley and Gottlieb are the only credited writers.

Benchley's screenplay was an example of a "journalist who didn't understand screenplays," Gottlieb said. "Sackler did a workman-like job of translating the novel faithfully. A faithful rendition of the novel was not what was needed. Something else was needed, and I came on board."

Spielberg sent him a copy of the script "with the word 'eviscerate' scrawled across the title page. I sent a lengthy memo of what the script needed."

Spielberg showed the memo to producers Richard Zanuck and David Brown. The quartet met at the Hotel Bel-Air on a Sunday to discuss it. By Wednesday, Gottlieb was on a plane to Boston with Spielberg, who was going there to cast locals.

Not only was production about to begin without a completed script but the mechanical shark wasn't cooperating. "The shark was problematic," Gottlieb said. "It wasn't working all the time."

Both Gottlieb and Spielberg were huge fans of the 1951 sci-fi horror film "The Thing From Another World," which created heart-pounding suspense without showing the creature until the end. So they decided to take a page out of that movie's playbook.

"We can intimate the shark," said Gottlieb. "We can show terrible things that the shark does, and that will build suspense. We concentrated on showing the effects of the shark when we didn't have the shark. It was even that much more impressive when he finally appeared."

"When we saw Lorraine Gary, Dreyfuss and Scheider interacting — these were three lovely people — we said, 'We are not going to show her cuckolding [Brody] with this dweeb." In the book, the oceanographer was a studly guy. In Sackler's version of the script, the casting choice was Jan-Michael Vincent instead of Richard Dreyfuss."

Gottlieb also ended up pruning his own character. "The hardest thing I have ever done in show business was to cut my part as an actor, because the writer side of me said, 'This character is superfluous.' "