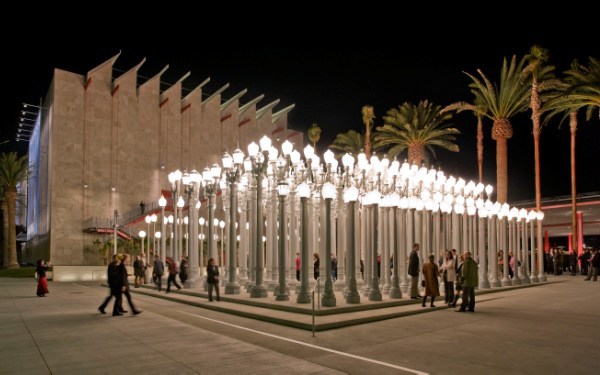 (Credit: lacma.org)
Los Angeles is often called a car culture, but a new partnership between the city's largest art museum and a major international automotive company will give new meaning to the overused expression.

In a deal that will be the longest corporate sponsorship in its history, the Los Angeles County Museum of Art announced Thursday a partnership with Korean automaker Hyundai, a ten-year agreement that will put a spotlight on Korean art through exhibitions and provide support for the museum's art and technology program.

Neither LACMA nor representatives of Hyundai Motor Company, the Seoul-based automobile manufacturer, would put an exact dollar figure on the deal, which the museum is calling "The Hyundai Project." LACMA director Michael Govan would say only that it was in "the millions of dollars."

Daehyung Lee, a representative of Hyundai, said in an interview "It's not for public disclosure."

As part of the deal, and in connection with the museum's upcoming 50th anniversary, Hyundai has funded the acquisition of two contemporary pieces – Robert Irwin's "Miracle Mile," the light installation currently on view at the museum's Broad Contemporary; and James Turrell's "Light Reignfall," the artist's spherical perceptual cell that was part of LACMA's 2013 Turrell retrospective.

In recent years, the Korean multinational company has formed sponsorships with two other prominent art museums – the Tate Modern in London and the National Museum of Modern and Contemporary Art in Seoul.

The deals also span approximately ten years each. For the Tate, Hyundai has sponsored a range of initiatives, including a series of installations at Turbine Hall as well as the acquisition of works by the late Korean-American artist Nam June Paik.

Hyundai's partnerships with museums is an effort conceived by the company's vice chairman Eui-sun Chung, the son of billionaire and Hyundai chairman Mong-koo Chung.

"He is driving all the branding initiatives, and art is one of those," said Won-hong Cho, executive vice president at Hyundai, in an interview on Thursday.

Cho said Hyundai was impressed by LACMA's iniatiatives with technology, and added that the museum's vision is "aligned with our vision."

For LACMA, the deal provides an opportunity to feature Korean art and culture more prominently in a city that contains the largest Korean population in the U.S.

Govan, the director of LACMA, said that engaging the city's Korean community has been something he's wanted to do since he joined the museum.

He called the deal with Hyundai "unprecedented in its scale and longevity" for the museum.

Govan said he developed a relationship with Hyundai over a number of years, during which he made a few visits to Korea. Museum leaders said that they have been in talks for months with Hyundai.

Three LACMA exhibitions will be rolled out starting in 2018, with a show dedicated to Korean calligraphy, followed by exhibitions on 20th century and contemporary Korean art. Officials from LACMA will be traveling to South Korea over the next few years to work on the exhibitions.

"Korea is a relative newcomer in terms of curatorial expertise in the U.S.," said Stephen Little, curator and head of LACMA's Korean art department.

Hyundai will also be a presenting sponsor on the upcoming exhibition "Diana Thater: The Sympathetic Imagination," set to open at LACMA on Nov. 22.

The car maker will provide support for the museum's Art + Technology Lab, which launched last year and provides grants to artist projects that deal in some way with technology.

Hyundai's sponsorship will allow the lab to operate "for the next six or seven years at least and expands grants to artists," said Amy Heibel, who heads the lab.

The museum has partnered with a number of corporate sponsors throughout its history, though none has been as big as the Hyundai deal.

The Korean company previously helped to sponsor the museum's display of architect Peter Zumthor's design for the LACMA campus that went on view two years ago.