University of North Carolina debates what to do with Saunders Hall, named for KKK leader 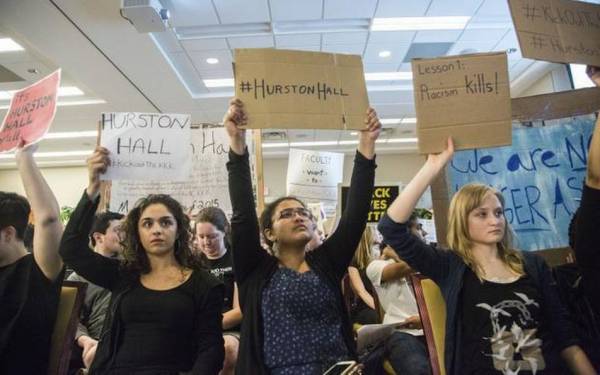 Demonstrators from left, Jaslina Paintal Anisha Padma, and Danielle Allyn hold signs as UNC Trustees as they hear from speakers on both sides of the issue.
(Credit: Travis Long - The News & Observer)

CHAPEL HILL, N.C. — Students put forth a forceful argument to University of North Carolina-Chapel Hill trustees this week for changing the name of a building they say perpetuates racism on campus.

At a meeting of the trustees’ academic affairs committee, a crowd of students turned out with signs that said “Black Lives Matter” and “Kick out the KKK.” The black-clad protesters stood at one point and chanted “Can you see us now?”

A group called the Real Silent Sam Coalition has pushed for months to rename UNC’s Saunders Hall. The classroom building is named for William Saunders, the 19th-century UNC graduate and trustee who many historians believe was an organizer of the Ku Klux Klan. He was also known for compiling colonial records, and UNC named its history department building for Saunders in 1922.

If the university fails to strip the Saunders name from the edifice, said student Omolulu Babatunde, “we will find ourselves, ultimately, on the wrong side of history again.”

Dylan Su-Chun Mott, another student, said the campaign is about more than renaming a building. “This movement is about the future of this university,” he said. “It is about facing the violent, racial history of UNC-Chapel Hill, of the state of North Carolina and of the United States. This is about power. This is about a struggle over who belongs at this university and who gets to make decisions about what happens here.”

To bolster their case, the students Wednesday night read anonymous racist comments, presumably by others on campus, from Yik Yak, a mobile application, such as: “I really hate blacks. I’m going home to where there aren’t any.” Such statements, students said, were painful evidence that the building debate had brought out a hateful response.

Student activists want the building named for Zora Neale Hurston, the African-American writer who took classes at UNC as an unofficial student. They have also advocated that a plaque of historic context be added to the Silent Sam statue, a prominent campus memorial to the Confederate soldier.

There was wide agreement among students on the renaming of Saunders. Frank Pray, student president of the UNC College Republicans, said the group supports removal of the Saunders name because the KKK was essentially a terrorist organization.

But the group does not support changes to Silent Sam, Pray said, which would dishonor “brave North Carolinians” who were defending their land from the advancing Union army during the Civil War.

Altering historic landmarks on campus could be met with resistance beyond the UNC campus.

On Wednesday, a bill filed in the North Carolina state Senate would prevent the relocation or alteration of public monuments, memorials, plaques or artworks commemorating “events, veterans or persons of North Carolina history” except by approval of the Legislature, the North Carolina Historical Commission or other body responsible for the care of monuments.

Jim Leloudis, a UNC history professor, suggested that the university take ownership of its history by applying scholarship to curate places that have names rooted in a racist past. Law professor Eric Muller suggested that the university not rename the building but redesign it and turn it into a museum-like provocation to examine uncomfortable questions.

Others say erasing the past would be a mistake for the education of future generations.

“There seems to be a vast effort to sanitize our history, to remove the rough parts and gloss over the low points, because, well, I suspect that it makes us feel better about a history that we seem powerless to change,” said Sam Fulwood, a black UNC alumnus and senior fellow at the Center for American Progress in Washington, who argued against a name change. He cited the ideological debate over AP U.S. History, which is under attack from some who believe that teachers should focus on only “patriotic” lessons that depict the country in a positive light.

The trustees are scheduled to make a decision on the issue in May. A website — http://bot.unc.edu/comments/ — will be open for public comments until April 25.

Several trustees have spent hours in the library researching Saunders and interviewing more than 200 people about the issue. There is no primary source material that confirms Saunders’ membership in the KKK, they said, but respected historians and the 1920 Board of Trustees declared that he was. In 1871 he was questioned by members of Congress about whether he was head of the so-called “Invisible Empire” in North Carolina and refused to answer, becoming a pioneer in exercising the Fifth Amendment right not to incriminate himself. “I Decline to Answer” was written on his tombstone, according to the Dictionary of North Carolina Biography.

Trustee Alston Gardner said though the Saunders controversy had swirled for years, it is appropriate to tackle it now.

“This is the time to face the issues of race and place,” he said. “We embrace the discussion and we believe the university is a fantastic venue for that – much better than Starbucks and a 45-second conversation with your barista.”

Heated discussions of campus building names have rippled across the country, and across the state.

Last year, Duke University removed from a dormitory the name of former Gov. Charles B. Aycock, who espoused white supremacist views. East Carolina University followed suit last month but will preserve Aycock’s name in another campus building in a space that will be known as “Heritage Hall.” UNC Greensboro is also considering renaming an Aycock building.