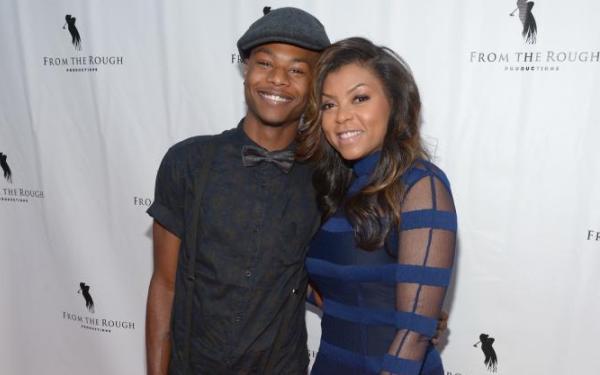 A 40-minute video obtained by the Los Angeles Times shows an encounter between Glendale police and the son of "Empire" actress Taraji P. Henson, during which she contends he was racially profiled.

The footage from Oct. 18 shows the officer driving in traffic about 10:10 p.m. in Glendale when the actress' son, who is in a Honda Civic ahead of him, drives through a lighted crosswalk as a person walks across. His race was not apparent in the video as he was driving.

The officer, still behind the 20-year-old, speeds up and initiates a traffic stop.

In the video, the officer approaches Henson’s son's Honda and tells him he was stopped for driving through a lighted crosswalk while someone was walking in it. The youth tells the officer he was headed to a friend’s home in Calabasas.

He hands the officer his insurance information and says he has never been arrested. He says his name is Marcel Johnson, and his mother is Taraji P. Henson.

Then the officer asked whether he had anything illegal in his car, and the young man responded that he had marijuana in his backpack, according to the video. He told the officer he has a state-issued medical marijuana license but couldn't find it.

“I appreciate you being honest with me about the weed. I do appreciate that because I do smell weed,” the officer said.

During the lengthy traffic stop shown on the video, Henson was searched and then told the officer he had Ritalin, a prescription pill used to treat hyperactivity, in his car. He admitted he didn't have a prescription and got the pill from a friend.

“You know you’re not supposed to have that, right?” the officer told Henson.

Henson then consented and allowed the officer to search his car. At that point, the officer was joined by two other officers and a police cadet.

For most of the traffic stop, officers searched Henson’s car for the Ritalin pill, which they never found because he said he may have left it at his friend’s house. They also found hash oil, marijuana and a grinder. The officer found a knife, which they determined was legal.

On the video, Henson told one of the officers he had smoked marijuana two hours before driving, so a sobriety test was performed. Henson passed the test.

In a conversation with one of the officers, Henson said he was leaving USC.

After checking his car, the officer decided not to cite Henson for the original infraction because it would have a lasting effect on his driving record. Instead, he cited Henson for possessing marijuana.

“I am not going to give you a citation for running that yellow because that would actually put a moving violation on your driving license, and you are going to have to go to traffic school and all that stuff, so I am helping you by not giving you a violation on it. All I am going to do is take the weed from you,” he said.

The officer told Henson he could go to court, show proof he has a prescription and probably just pay a fine.

“It felt like this was a little better than the other one,” he said. “I am giving this to you too because you smoked weed about two hours ago… and a warning if you have Ritalin on you and you’re not supposed to, don’t do it. That’s a big violation and I wouldn’t want to do that to you.”

Marcel Henson's mother drew attention this week after she revealed in an interview with Uptown magazine that her son was racially profiled and stopped by police in Glendale and at USC.

The Academy Award- and Emmy-nominated actress said her son was profiled in Glendale, where he was stopped by police. She told the magazine her son followed police orders even though they allegedly searched his car illegally.

In the end, Henson said her son never got a ticket for what they stopped him for.

The “Empire” star said she planned to enroll him at USC before he was stopped by police. But now, Henson said, her son will be going to Howard University, her alma mater.

Henson told the magazine she’s “not paying $50K so I can’t sleep at night wondering, 'Is this the night my son is getting racially profiled on campus?'”

John Thomas, chief of the USC Department of Public Safety, said he “was deeply disturbed to read news reports about a prospective student who felt profiled on or near campus because of his race.”

In a statement, Thomas said he wanted to talk with Henson and her son.

“As someone who personally experienced racial profiling as a teenager, I have a stake in learning more about this incident and doing all I can to reach a just resolution," he said.