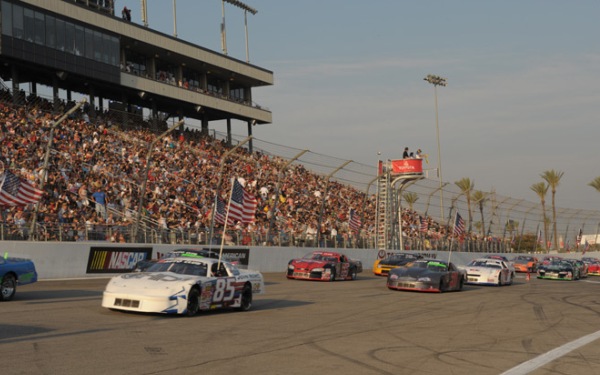 Last year Irwindale seemed on the verge of driving the Sriracha plant out of the city over pungent smells before the hot sauce company owner and politicians cooled down and patched things up.

But the industrial town of 1,500 now looks poised to lose another of its well-known features after the City Council voted to approve plans to demolish the Irwindale Speedway to make way for a 700,000-square foot outlet mall.

The 6,000-seat track, which opened in 1999 near the intersection of the 605 and 210 freeways, features a 1/8-mile drag racing strip, drift racing and on-site stock car driving school.

During the Wednesday night meeting, city officials said the creation of the regional outlet mall could mean thousands of jobs and pull in much needed revenue for the city, with an estimated sales tax revenue of $2.6 million a year.

“This is really exciting for Irwindale,” said Mayor Mark Breceda. “It’s going to do wonders for the city.”

Although no one spoke in opposition at the meeting, Gus Romo, community development director for the city, said some residents have voiced concern over losing Irwindale Speedway.

“There’s some sentimental value to people that have been used to having that speedway for the last 16 years,” Romo said. “The city has always had a racing element to it.”

The existing lease at Irwindale Speedway will proceed until the owner secures a certain number of tenant shops for the outlet, Romo said, which means it’s possible the lease could be renewed for the 2016 season.

Jim Cohan, president and CEO of Irwindale Event Center, took over in 2012, the same year the former leaseholders declared bankruptcy. In a statement, he said it’s still unclear if 2015 will be the final season.

"We will continue to operate this top-notch NASCAR oval track and NHRA drag racing facility for as long as we are able to do so," Cohan said. "We can promise you that if the time comes where we must announce a final season of this legendary facility...you'll hear it from us." The project is proposed in two phases -- with the first phase anticipated to break ground in 2016 and be completed by 2017 and the second phase to begin in 2018.

Irwindale almost drove out the Sriracha plant after city officials demanded that the factory that produces the famous and trendy hot sauce shut down to deal with complaints about pungent smells. That unleashed a sustained political feud between the owner of Huy Fong Foods, which makes Sriracha, and city officials under the glare of an intense media spotlight.

Cities around the country turned into suitors for the Sriracha plant and even members of Congress weighed in with support of the hot sauce company, including Sen. Ted Cruz (R-Texas), now a presidential candidate, who tweeted last May: “#Sriracha may not be welcome in California, but you’d be welcomed with open arms and eager taste buds in Texas.”

The city of Irwindale eventually dropped a lawsuit against the Sriracha hot sauce factory and tabled a separate resolution declaring the factory a public nuisance. Officials with Gov. Jerry Brown’s Office of Business and Economic Development helped broker a meeting between Irwindale officials and Huy Fong Foods Chief Executive David Tran that ultimately led to a détente, sources said at the time.

While it seems that the Irwindale Speedway will not remain, staff has been preparing for a while for the possible closure and are focused on the season ahead.

“It’s not a happy idea of the place becoming an outlet mall,” said Doug Stokes, spokesman for Irwindale Speedway. “But we’ve got a good season to prove what we can do and to be a good example for other cities. We’re still having a great time here.”