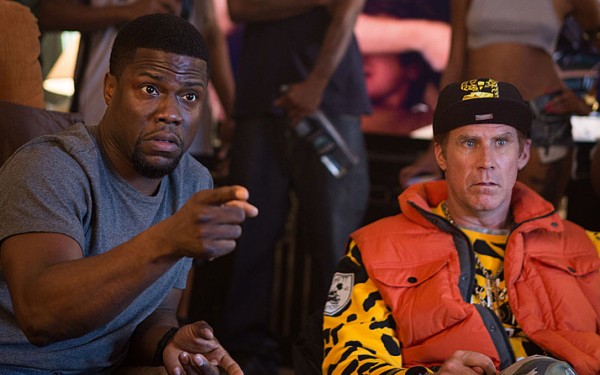 Yes, “Get Hard” is one long, gay-panic joke when it isn’t trading in racial stereotypes.

But it’s hard not to appreciate the mismatched buddy chemistry of leads Will Ferrell and Kevin Hart, both huge stars in their own arenas, and boasting fans outside of those bases as well.

It should also be noted that “Get Hard” owes a very big debt to “Trading Places,” a 1983 breakout hit teaming “Saturday Night Live” cast members Eddie Murphy and Dan Aykroyd.

In “Get Hard,” Ferrell is James King, a master of the universe about to marry Alissa (Alison Brie), the hot socialite daughter of his boss Martin (Craig T. Nelson), the head of a commodities brokerage, which he founded with “nothing more than” an $8 million loan from his father.

New partner James makes millions at the firm and lives in luxury.

Hart is Darnell, the owner of Hollywood Luxury Bubbles, a Los Angeles car washing and detailing business based in the parking garage of James’ building. Darnell desperately needs $30,000 to move his beautiful wife, Rita (Edwina Findley Dickerson), and their grade-school-age daughter Makayla (Ariana Neal) out of South Central.

When James is arrested and sentenced to 10 years in San Quentin for swindling his clients, he hires Darnell to teach him how to survive in prison, assuming incorrectly that because Darnell is black, he must be an ex-con.

Darnell turns James’ luxury home into a prison, making James sleep in the wine cellar made over into a prison cell.

Playing with racial stereotypes is one of the film’s chief sources of laughs. That the screenplay is attributed to four white men may tell you more about the film industry’s lack of diversity than how funny the jokes are (they’re funny). We all know that Ferrell’s bare chest and butt are hilarious.

His capoeira skills are, too. We learn that James was “shipped to boarding school in London” by an indifferent father, where he “studied with the Murdochs and the bin Ladens,” and that the latter “only cheated at soccer.”

For his part, Darnell has a cousin named Russell (an excellent T.I.), who heads the Crenshaw Kings, an L.A. street gang, and may be able to help James. How quickly James takes to gang life is one of the film’s comic pluses.

While an elaborate bit involving John Mayer falls flat, much of “Get Hard” works, thanks to the comic sparks flying when Ferrell and Hart go at it one-on-one, especially with shivs or when they discuss “keistering.”

As we count down from 30?days to the day James, who proudly attended Harvard Business School, must surrender to the authorities, James become increasingly horrified at the thought of forced man-on-man sex. At its best, “Get Hard” is a dazzling demonstration of the slapstick physical comedy gifts of its stars.

You may find yourself laughing uncontrollably at the sight of James and Darnell trying on Mad Dog faces. Yes, you’re going to feel guilty laughing at “Get Hard,” but the film’s stars will help you get over it.

(“Get Hard” contains profanity, nudity, drug use, and enough gay jokes to have its own parade.)

Visit the Boston Herald at bostonherald.com