UCLA basketball will have depth, more experience next season 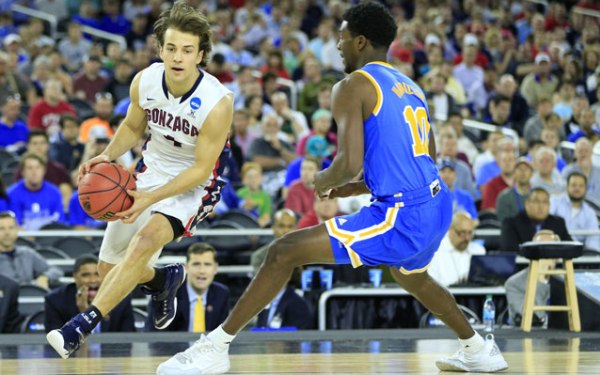 HOUSTON — Moments after his second season with the Bruins ended in the same way as his first, UCLA Coach Steve Alford stepped to a lectern here and talked about this season’s progress.

There were several times this season, Alford has said, that his team could have quit, imploded. At halftime against Kentucky, Alford had to tell his team they had just set a record low for points. There was a five-game losing streak. The Bruins finished second to last in the Battle 4 Atlantis tournament.

But UCLA gradually improved and made an unlikely run to the South Regional semifinals.

So where does UCLA go in Alford’s third season?

Season three is an important one for a college coach. Alford will have had time to leave his stamp on the program.

Next season should be his most stable yet, but that also means there are no more excuses. In his first season, Alford inherited a talented roster but had to install his own system. This season, the Bruins lost five players to the NBA.

In the off-season, UCLA will lose its leader, senior guard Norman Powell, to graduation. Freshman forward Kevon Looney is also a strong candidate to jump to the NBA early. He has said he will make his decision in the coming weeks but left open the possibility of a return.

“College is always a great place to build your character and build your game,” Looney said after Friday’s loss. “So I can see myself coming back, but I’ve got to talk to my parents about it.”

Even if Looney departs, as many draft watchers expect, the Bruins will be deeper and more experienced.

The addition with the biggest impact may already be on the roster. Freshman forward Jonah Bolden, a highly sought four-star recruit from Australia, was ruled ineligible by the NCAA for his first season. He has practiced with the team since January and could slide naturally into the void left by Looney.

Bolden, at 6 feet 10, is an inch taller than Looney, and both are athletic forwards capable of handling the ball. In high school, Bolden was a versatile scorer with an impressive jump shot.

Powell’s spot is trickier to fill. He led the team in scoring and, as a senior, was the team’s emotional center. His athleticism and ability to get to the rim powered the Bruins through shooting droughts.

Two talented guards have already signed with UCLA. Aaron Holiday, the younger brother of Jrue Holiday, has the ability to play point guard.

As he matures and grows comfortable with the offense, he can free Bryce Alford and Isaac Hamilton to play off the ball, where they are more natural fits.

Prince Ali, another four-star guard, plays an attacking style similar to Powell. The question is: how quickly can he develop?

In any case, UCLA will be a deeper team. The Bruins should now have a mix of experienced players who should stay multiple years, such as Hamilton, Alford and Tony Parker, and players with more immediate NBA potential, such as Bolden.

UCLA is also still in play for top recruits such as Jaylen Brown, the No. 2 player in the class according to rivals.com, and Stephen Zimmerman, No. 11.

And the frontcourt should be a strength. Parker, who developed into a focal point of the offense, will be a senior. Freshman Thomas Welsh made significant strides this season, and the 7-footer saw his minutes balloon.

Gyorgy Goloman did not make much of an impact, but the coaches have spoken highly of his potential.

As he sat in the locker room after his last game ended, Powell said he has left the team in a good place.

“I’m more than happy to say this program is going in the right direction,” he said. “These coaches have done a great job of laying a foundation.”