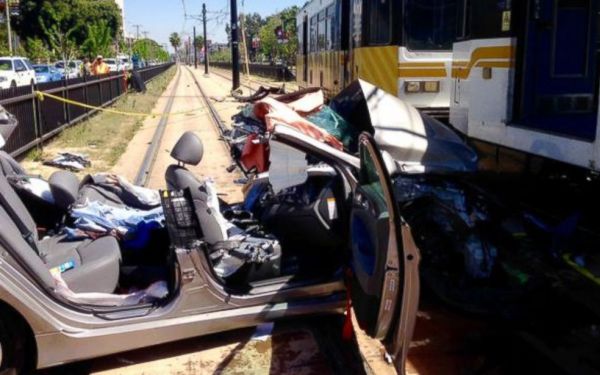 Over 20 people were injured when a metro rail train collided with a car near the University of Southern California in downtown Los Angeles on Saturday, March 28, 2015.
(Credit: Los Angeles Fire Department)

The USC film student in a Hyundai that was struck by a Metro Expo Line train near campus Saturday after he turned his vehicle onto the tracks remained in critical condition Sunday morning while the train’s operator was released from the hospital Saturday, authorities said.

The collision occurred at the intersection of Exposition Boulevard and USC Watt Way shortly before 11 a.m. Saturday, police said. The three-car Metro Expo Line train was traveling eastbound when the 2013 Hyundai Sonata, traveling in the same direction, made a left turn at USC Watt Way and was hit by the train, said Sgt. N. Vargas of Los Angeles Police Department’s South Traffic Division.

The crash derailed the first two cars of the light-rail train and destroyed the silver Hyundai. The train, knocked slightly off its tracks, managed to stay upright.

The film student, who Vargas said was about 31 years old, had to be extricated from the Hyundai he was driving and was clinging to life when he was taken to the hospital, authorities said. A total of 21 people were treated for injuries, including 10 that were taken to area hospitals. Of those 10, eight were commuters on the train that sustained minor injuries, authorities said.

The train’s operator, who sustained serious injuries and was identified as Kenneth Goss, was treated at the hospital Saturday and released.

“He was home last night with his family — a little shaken up but he was home,” said Jose Ubaldo, a Metro spokesman.

Metro supervisor Diljiat Sandhu said it looked like the car’s driver was trying to turn left at a grade crossing and didn’t see the approaching train.

The train, which collided with the car at a traffic signal between USC and the Museum of Natural History, was removed overnight and taken to Metro’s Long Beach yard, Ubaldo said. Full service on both tracks of the Expo line was restored after 5 a.m. Sunday, he said.

LAPD’s South Traffic Division is investigating the incident with help from other LAPD officials, the L.A. Sheriff’s Department, University of Southern California Department of Public Safety and Metro, police said in a statement.

Metro was also conducting its own investigation into the incident as is standard procedure, Ubaldo said.

City News Service and the AP contributed to this report.