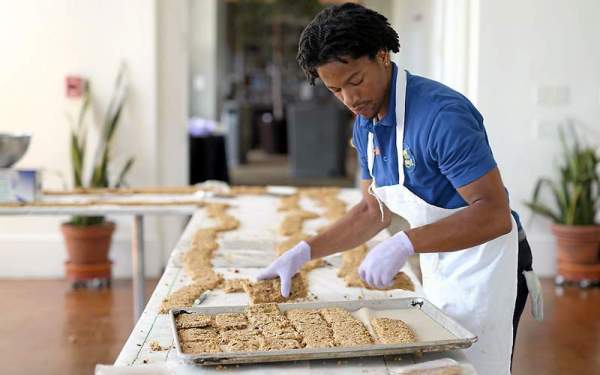 SANTA CRUZ - The scent of peanut butter and honey filled the air of the second floor of the College Nine and 10 dining hall at UC Santa Cruz while people worked to create the world’s longest granola bar.

Volunteers were attendees of the National Association of College & University Food Services conference at UCSC.

Though attendees weren’t obligated to help with the record attempt, many felt compelled to lend a hand and become part of history.

For 70 minutes, chefs along with volunteers worked to mold the granola into a singular granola bar that spanned the length of the room and back. Organizers arranged tables in a circle, covered the tops with butcher paper and drew an outline of how wide and long the granola bar should be. Lanette Dickerson, executive chef at UC Riverside, was one of the hundreds who donned purple food gloves to shape the granola bar.

“It was so much fun,” she said. “Everyone here, all the universities, had so much fun doing it.”

By the numbers, the recipe required 50 pounds of oatmeal, 20 pounds of diced almonds, 15 pounds of peanuts, 60 pounds of honey, 30 pounds of brown sugar and more than 20 pounds of cranberries and golden raisins. The final length of the bar came out to 420 feet, shattering the original plan of 300 feet and obliterating the benchmark of 30 feet set forth by the committee at the Guinness World Records.

Organizers even recruited Jet Tila, an American chef with five culinary world records under his belt, to help with the logistics.

Tila cheered on the workers throughout the event, building enthusiasm for people shaping the granola bar.

Philip Robertson, adjudicator for Guinness World Records, kept track of the length with a measuring wheel and confirmed the record in front of the crowd. Robertson said he has seen close to 500 records attempts in his time with Guinness and commended the UCSC crew for its planning.

Because organizers created a plan, kept in contact with Guinness officials and created a large margin for error, they succeeded, he said.

“Most importantly, it tasted like a great granola bar,” he said.

“Right now, I feel relieved,” he said after the Guiness official confirmed the record. “I’m really excited it happened and how smooth it went down.”

One aspect Langlais said he’s particularly proud of is how tasty the dish turned out. While taste wasn’t important to the record, it was important to Langlais. Others who attempt and break food records don’t necessarily care about presentation or taste but that was a priority for Langlais.

“I can’t make anything unless it tastes good,” he said.