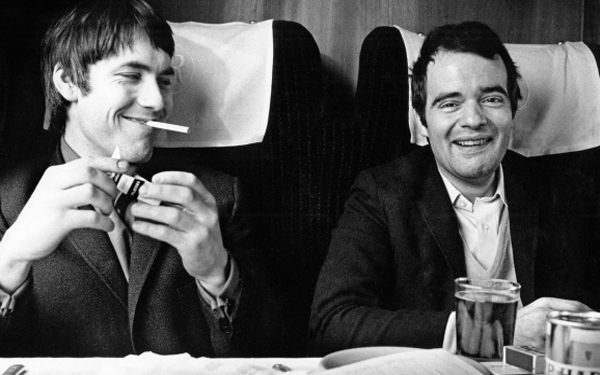 If you look at the best bands over the generations, chances are you look to the stage, to the instruments, to the players who have masterfully honed a sound that can be compared to no other. These are the geniuses. These are the people responsible for changing the way we listen to music. Most of the time that’s tried and true, but if that band you’re gazing at happens to be The Who, you may need to do a little more digging to find the soul of success.

This is, in the simplest of terms, the goal of director James D. Cooper’s documentary Lambert & Stamp, to explore the relationship of two unlikely young men responsible for the upbringing of rock legends. Meet Kit Lambert and Chris Stamp, hopeful filmmakers turned self-proclaimed managers, who realized the potential in each other and in four perfectly chaotic musicians that would go on to become The Who. What started as a simple excuse to make a film quickly turned into a fulltime albeit anarchistic job as leaders of youth rebellion in the music industry.

But make no mistake; this isn’t another rock doc about The Who. It’s a love story about the men behind it—two very different men from very different backgrounds but who found a common ground in the art they sought to create.

“The Kit Lambert and Chris Stamp thing is really a story about eternal youth in a sense, with the fact that each one of them came from very different circumstances, yet they felt the same constraints. Chris Stamp being from the working class East End of London, born into a certain reality that told him that his life was going to be a certain way. And Kit Lambert, descending from the aristocracy, being the godson of Margot Fontaine, was also handling a similarly overbearing situation that was very hard to transcend. So you have two guys finding one another, accepting one another, first of all recognizing a type of unity, and having a shared artistic dream put something around it all,” Cooper explains.

This is where the two found solace in each other and where they began their tumultuous yet tender partnership that endured success, failure, drugs, rock n roll, and which ultimately ended with the untimely death of Lambert in the 70s.

As a close friend of Chris Stamp, Cooper saw the beauty, though often tragic, of Lambert & Stamp’s story. And it all started with a simple photograph, one in which Cooper couldn’t deny the tangible connection that lied between the two.

As Cooper recalls, “When you see the two of them standing there, there is a clear narrative in the picture. It’s amazing. You can just tell there’s a movie there. I was conscious of that relationship, and obviously there was a great story there, maybe the greatest untold story in rock.”

That’s a lot of responsibility for anyone to capture on film, especially for a first-time director like Cooper whose career has been bred on his work as a cinematographer (Brother’s Keeper, David and Lisa). But one never to shy away from a challenge, even with one of rock’s biggest names attached as a major player, Cooper embraced Kit and Chris’ story with devoted concern, knowing that it would not only be a technical challenge, but an emotional leap of faith on all of its member's parts.

“It wasn’t long after [convincing Chris Stamp] that we met with [guitarist and composer] Pete Townshend, and the reality starts to hit. You know, I just thought this would be a neat idea, and then all of a sudden there was [lead singer] Roger [Daltry]. Then it wasn’t long after that that we started filming. I have a long history as a cinematographer, so once I’m in the process, I get over the projections and the self-imposed fear-based resistance. But it’s a big responsibility, and you know, I deal with it through process, which hopefully begins to erode that fear,” Cooper describes.

This process, which Cooper holds dearly as an essential aspect of his art, began with embodying the spirit of the youth rebellion in London, the environment in which Kit, Chris, and The Who all took root and called their own. As a director, he knew a fact-based, linear narrative would be untrue to the rhythm of the experience as it leaves the viewer distant, neglected even.

“Your experiences—you organize them chronologically, but you don’t live them chronologically. We avoided that kind of linearity in order to have the viewer feel that they were part of a process of discovery,” says Cooper. “Even as Chris Stamp makes his journey through the film, he’s constantly in a process of discovery… I think that every great sort of epic work of art, no matter what the circumstances, is ultimately about the people watching it. It’s something Hemingway was big about; even if it’s a war story, you make the reader feel like they know what they’re going through.”

And what these particular two men go through is the constant tug of rebellion at their sleeve. The power of youth lies in its ability to not give a damn while simultaneously trying to create something meaningful. It’s a paradoxical but Cooper saw it imperative to the film—to embed the pulse of rebellion into the film’s structure and synchronizing that with the buoyant unruliness of the boys themselves.

Cooper explains, “Basically, the film starts in 8th century BC, and it goes on through the Iraq War White House, so there’s a through-line about the predicament of youth and the need to create your own content in order to not only deal with the world, but put your mark on it.”

With Lambert & Stamp, we witness the irrefutable impact of Kit and Chris’ relationship on our world of music. Though pain and suffering may have been necessary ingredients to the road of creation, it was ultimately their feverish love for one another that transcended the line of genius and keeps the breath of rebellion alive today.

Click here to register to win a Lambert & Stamp movie poster and an Amoeba gift certificate in L.A.

Click here to save $5 off your purchase of $25 or more at Amoeba!

Lambert & Stamp opens at The Landmark in L.A. and at AMC Empire 25 and Sunshine Cinema in New York on Friday, April 3rd.

Interviews
Lily James and Sebastian Stan find a real relationship at the heart of 'Pam & Tommy'
232 views
Interviews
Ricky Gervais knew people would be mad about his new Netflix special. He did it anyway
842 views

Interviews
The star of Oscar-nominated 'Flee' gives his first interview: 'I wanted my story to be seen'
1,203 views

Interviews
'Crazy Rich Asians' made Henry Golding a star. Now he's showing Hollywood everything he can do
893 views