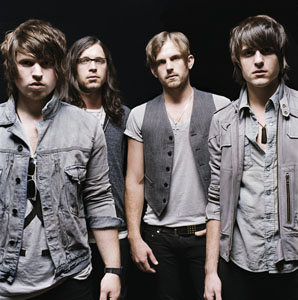 At first glance, Peter Walker seems like any guy you might run into walking down the street on a hazy afternoon. However, average or run-of-the-mill are definitely not terms to describe the singer-songwriters talent and abilities.

"Nonconformity is tied into this idea of the upside of struggle," Walker states. "Fighting for your individuality, dealing with who you really are, can be terrifying, but not doing it leaves you just a shadow of yourself. People live their whole lives without ever realizing their potential, their full humanity, because it‚s too hard to get past the shit that‚s holding them back."

Clearly, Walker is not afraid of paving his own way on the road less traveled. Although the sentiments expressed in his songs are quite relatable in their universality, Walker presents honesty and emotion in his lyrics is unique and refreshing. The 11 tracks on Young Gravity, Walker's follow-up to the critically lauded Landed, deal with the good, the bad and the ugly in life.

While songs like "Talk to You" are catchy, they are also frank. In the song "Preacher" Walker sings, "At least I‚ve got my alcohol/ It's not a celebration." Loneliness, alienation, addiction and death are all topics touched on in the album, but by no means is Walker one to ceaselessly dwell in the pits emo-ness. Listen to the words of "Flagship" "See it as a lesson learned/ there must be some way to stay afloat," and you'll agree.

The influence of Walker‚s musical inspirations (Neil Young, Led Zeppelin, Meat Puppets, etc.) is felt throughout the disc and its overall feel is a result of the artist's collaboration with his fellow producers ˆJim Fairchild, of the recently disbanded Grandaddy, and Aaron Espinoza, of Earlimart. As soon as Espinoza heard some of the early demos for the album, he immediately wanted to work with the Walker.

Both Fairchild and Espinoza lend their musical skills not only to producing, but also playing on Young Gravity. The CD was one of the first records to be cut at Elliott Smith's studio in Van Nuys since the artist's death in 2003. Walker says, "Elliott is definitely still there. He would write on anything and everything, so there were these gear cases around with scrawled verses and poems. His vibe was all over the place."

While Walker found comfort and creative harmony in the studio, there is one track that retains the original vocal track from its original demo. On "39 Stars" the vocals are actually Walker singing the words for the very first time an authenticity and rawness that couldn‚t be captured in any studio.

On stage, Walker finds support in drummer Chris Reynolds and bassist Tim Hutton, who happens to be the son of Three Dog Night singer, Danny Hutton. The Los Angeles based trio has been playing up and down the coast of California, as well as performing five amazing shows at this year's South by Southwest Music Festival in Austin, Texas.

Being able to count on such a sold team of players has allowed Walker to be able to concentrate on really focusing on developing his own skills as a performer. And, it's pretty clear that there really is no task that this musician will back away from.

"It's such an amazing thing to struggle and to come out on the other end better than you were before. The key to doing it is focusing on the payoff. When you‚re learning anything whether it‚s how to play guitar or how to talk to your family ˆ once you see some benefit and make the connection between the effort and the reward, you understand that it‚s possible to get where you need to go. You definitely need faith and perspective and desire, but it's possible, and it's worth it.

Young Gravity will be available April 11. Peter Walker will perform April 8 & 9 at the Troubadour, in West Hollywood and April 11 at Sea Level Records, in Echo Park. For more information, visit www.peterwalkermusic.com.