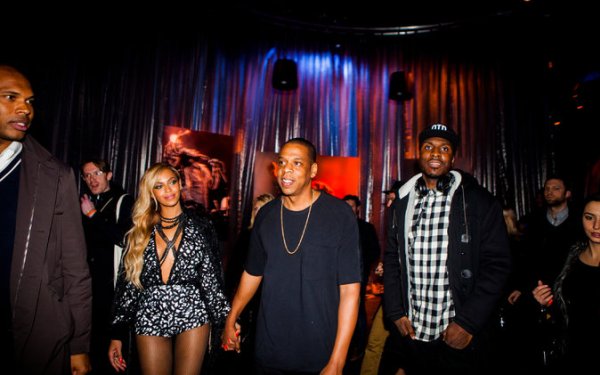 Beyoncé and Jay Z at the unveiling of Tidal in Manhattan on March 20, 2015. The service will have two levels of subscriptions.
(Credit: Sam Hodgson for The New York Times)

The music companies had their shot. So have the tech companies.

With the scripted sheen of one of his videos, rapper Jay Z led a parade of music royalty before reporters Monday to unveil a new music streaming service — Tidal — that it says will ensure artists get paid fairly for their work.

The service, starting at $10 monthly, aims to take customers from rivals such as Spotify and Pandora in part by appealing to fans’ sense of loyalty. They say artists will get a bigger slice of revenue from the streaming fees, and that the music itself will be streamed at higher fidelity.

To underscore the point, Jay Z (born Shawn Carter) was joined at a Manhattan news conference by a dozen or so music A-listers, including his wife, Beyonce, rapper Kanye West and singer Madonna.

The carefully orchestrated rollout of Tidal included a social media blitz, where celebrities such as West told his fans that “together, we can turn the tide and make music history.”

But analysts said it’s not clear that noble-sounding endorsements from popular musicians could change the bottom line for most acts making fractions of pennies for their streams.

“Jay Z has recognized that there’s an opportunity to bring personality and quality to streaming music services,” said Mark Mulligan, a music industry analyst at MIDiA Research. “He’s essentially setting himself up as the HBO of music streaming. But it takes more than a handful of music stars to change the underlying dynamics in the music streaming era.”

Artists have been taking stands against the payment model offered by streaming services, but with Tidal, some are said to be getting an equity stake in the service that Carter bought for $56 million this month.

Tidal officials did not disclose financial details about how artists played on Tidal would be compensated.

“Our goal is simple: We want to create a better service and a better experience for both fans and artists,” singer Alicia Keys, one of the owners of Tidal, said at the news conference. “We believe it’s in everyone’s best interests to preserve the value of music.”

Up for grabs are potentially billions of dollars in revenue that fans pay for music streaming every year. Artists have been critical that streaming services pay most of the royalties to record labels and music publishers, instead of the singers and musicians who created the music.

Singer Taylor Swift famously yanked her latest album “1989” from Spotify last fall because she didn’t want her songs offered on the service’s free version. She maintains that music should not be free because it sets a dangerous precedent that consumers don’t have to pay for listening to albums.

Tidal describes itself as “the first music streaming service that combines the best high-fidelity sound quality, high-definition music videos and expertly curated editorial.” The pricing will include two tiers of fees and access — with no free service.

Tidal, which is available in 31 countries, had 500,000 paid subscribers by the end of 2014. It has plans to expand to six additional countries.

However, the artist-owned service faces competition from an already crowded streaming service marketplace.

Spotify, which charges about $10 a month, has more than 15 million paying subscribers and more than 60 million active users, according to the streaming service’s website. It’s available in 58 markets.

In November, Daniel Ek, Spotify’s chief executive, responded to musicians’ criticism in a blog post, noting that an artist as big as Swift could make up to $6 million a year on the platform.

“Our interests are totally aligned with yours,” he wrote in the post addressed to musicians. “The more we grow, the more we’ll pay you.”

Internet radio company Pandora, one of Spotify’s competitors, reported that in the third quarter of 2014 it had 76.5 million active listeners. But Pandora offers its services only in the U.S., Australia and New Zealand.

Tidal also has a crowd of small competitors to fend off.

Samsung and Google have popular apps for accessing music. Amazon has been adding features to its service for Prime subscribers to keep pace. And the music industry has been striking deals with upstarts that are experimenting with new ways to get people to pay for music.

One app being tested, for instance, lets users listen to a song for free as long as they share the tune with a friend. Los Angeles start-up UrRadio, which launched its service Monday, and Slacker Radio are trying to win over listeners by bringing back the experience of radio hosts and DJs.

The movement in the industry promises plenty of innovation, but it could be the marketing power of big stars rather than cool features that determine which streaming services survive.

Other artists have tried to reclaim the artists’ role in music tech and streaming models before, but none has successfully upended how digital music is experienced and paid for. Rapper Dr. Dre had vast success with his Beats headphones company, which he sold to Apple for $3 billion. However, the streaming service connected to the company only had about 250,000 followers.

To differentiate itself, Tidal plans on offering “exclusive content,” which Keys emphasized “will be found nowhere else.”

“Consumers, for reasons that we are all busy trying to understand, haven’t yet gotten used to the idea of paying a subscription fee for music,” analyst Russ Crupnick of MusicWatch noted. “The challenge is how do you launch or have a paid service thrive when there are already great ad-supported options?”

To separate itself from the pack of similar services, Tidal will need to offer exceptionally compelling reasons to pay, analysts said. Although the streaming service will offer original content, there are already plenty of free social media services and content portals for artists to engage with fans.

“You have to convince people that this paid subscription music is a better experience,” Crupnick said. “But I think as a lot of people are finding out the environment for paid subscription services is very challenging.”

Most young music fans aren’t audiophiles, and even if they noticed a difference between compressed streaming and CD-quality fidelity, it’s not clear that’s worth $19.99 a month to them, especially if they’re listening on budget headphones or Bluetooth speakers that negate any advantage.

If Jay Z can dramatically raise the royalty rate for artists on Tidal, that might be enough to win the goodwill of musicians and make the service an ethical option for fans who want streaming’s convenience.

But Mulligan said, “My gut tells me that Jay Z has bitten off more than he can chew.”