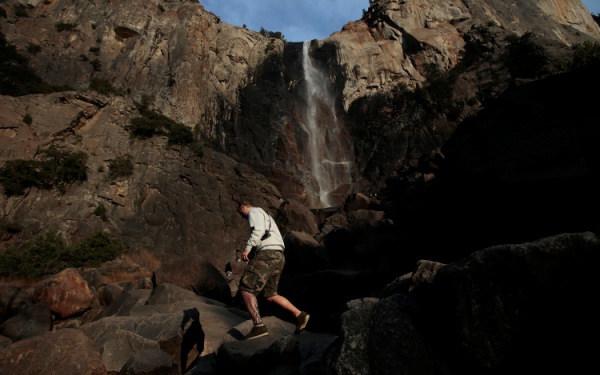 A hiker braves the slippery rocks below Bridalveil Falls on March 18, 2015 in Yosemite National Park, Calif. The drought is taking a heavy toll on the park.
(Credit: Robert Gauthier/Los Angeles Times/TNS)

YOSEMITE NATIONAL PARK — Yosemite National Park is bracing for its driest year on record, with visitor bureaus downplaying the allure of the park’s most famous waterfall and instead touting the park as a destination for hiking, bicycling and photography.

Yosemite Falls will probably go dry in June — two months earlier than usual, parks officials say. The Merced River, which powers the spectacular Nevada and Vernal falls before meandering across the Yosemite Valley floor, will probably slow to a shallow stream about the same time.

And with the drought enabling western pine bark beetles to kill large areas of forest, the park is preparing for a bad fire season.

“Visitors bureaus are saying they’re not going to promote Yosemite Falls as much this year,” said Scott Gediman, assistant superintendent for public and legislative affairs at the park. “My response: No problem. We have to be realistic.”

March this year felt more like June to visitors. The snowpack that supplies the Merced River is less than 12 percent of normal, an unprecedented low that has prompted officials to close Badger Pass Ski Resort months ahead of schedule and advise prospective summer backpackers to plan trips near large lakes instead of dwindling streams.

On a recent warm weekday morning, park geologist Greg Stock strode along a Yosemite Valley trail edged with redbuds and poppies blooming a month earlier than usual. He scanned the surrounding granite peaks for signs of snow.

No luck, except for a tiny patch on top of Half Dome.

Climate change coupled with drought is one of the park’s biggest challenges, he said. It is undermining the concept of Yosemite as a refuge where nature prevails unmolested by man-made forces.

The outcome is largely unknown.

“Our rangers will be including drought and its impacts in their interpretive talks,” he said. “But no one in the park has experience with snowpack levels this low.”

The fourth consecutive year of drought is shaping up to be the worst of them all in the region of John Muir and Ansel Adams. Things started drying up as early as January.

Average annual rainfall in Yosemite Valley is 37 inches through July 31. So far, the area has received about 12 inches, and the rainy season is almost over.

Jeff Holmquist, a research scientist at the Institute of Environment and Sustainability at the University of California, Los Angeles, said the change will be stark for longtime park visitors.

“With the exception of September, it used to be that there was almost no place you could throw a sleeping bag down in Yosemite that was beyond the reach of water sounds: dripping, gurgling, roaring,” he said.

The last time it was this dry was more than 1,000 years ago, say scientists at the 747,000-acre park, which draws about 4 million visitors a year.

Now, the nervous chatter in Yosemite and nearby communities is: Have you noticed all the trees that are dead or dying?

Throughout the Sierra Nevada, projections are for more frequent, larger and more intense wildfires fed in part by disease and infestations of bark beetles, which flourish during times of drought. Federal authorities say that forest mortality rose 300 percent from 2013 to 2014 largely because of the two scourges, leaving dead timber ripe for fire.

The bark beetle is endemic in California mountains. But years of fire suppression, coupled with increasingly dense growth and consecutive warm winters, have triggered beetle population explosions earlier in the year.

Healthy pine trees deal with bark beetles by drowning the invaders in sap produced with water. But in the drought-stricken mountains, hungry beetles land on stressed trees and emit an odor that attracts new swarms.

The beetles bore into the bark and feast on the moist inner core, where trees store and transport nutrients from roots to needles. The beetles carve egg galleries, where larvae hatch, mature and emerge to infect other trees.

“All these trees are competing for water,” park scientist Joe Meyer said recently as he looked at a stand of ponderosa pines. “But away from the rivers, and up on the slopes, the water is just not there. So, only the strongest will survive.”

The good news is that a warmer winter allowed firefighters to begin setting small, tightly controlled burns in some areas of the park to reduce the threat of catastrophic wildfires and benefit wildlife by creating open areas in thick brush. Controlled burns also can give firefighters better access to any wildfires in the coming fire season, authorities said.

The future is also bleak for Yosemite’s glaciers. Scientists recently discovered bedrock protruding from the center of Lyell Glacier, absorbing the sun’s rays and accelerating the retreat of the ancient ice sheet around them.

The loss of flowing water has forced aquatic insects to seek moist areas beneath rocks and underground.

“Our research suggests that animals will be very resilient until river water starts pooling up” as flows diminish, Holmquist said. “At that point, like bailing out of a crashing airplane, insects familiar to fly-fishing enthusiasts such as Caddis flies will head upstream in search of the depths and flows needed to complete their life cycles.”

In some areas, nonnative fish that evolved in warmer waters elsewhere are likely to outlast cold-water native species. Of particular concern is the fate of a unique minnow known as the Redhills Roach, which is found only in a small stream just west of Yosemite’s boundary.

Last summer, the stream was reduced to a small pond shared by about 1,000 of the minnows and dozens of predatory nonnative green sunfish.

“This year, the drought will be even worse,” said Peter Moyle, an expert on stream ecology in the Sierra Nevada at the University of California, Davis. “We’re planning to go back in July and rescue all the minnows we can.”

Park entrepreneurs are hoping that lower gasoline costs will help attract spring and summer visitors to Yosemite — with or without waterfalls.

Lisa Cesaro, spokeswoman for Yosemite concessionaire Delaware North, said, “We’re reaching out to our main markets with this message: ‘If you want to enjoy our majestic waterfalls, come now.’”