L.A. is carried away on impounding vehicles, suit says 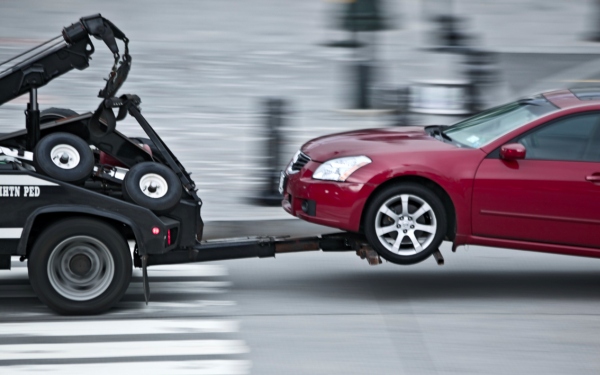 Last year, Los Angeles authorities towed and impounded 4,539 motor vehicles for violating the city's 72-hour time limit for parking in the same spot. One of them was a 1999 Toyota Sienna belonging to attorney J. David Sackman and his wife, Jerolyn.

That action has landed the city in federal court.

The Sackmans, whose small van was hauled away in September while they were out of town, are challenging the city's three-day restriction and impoundment process. They believe the case they are making marks the first time someone has based a complaint on the lack of a clear warning.

They allege that the municipal ordinance violates the California Vehicle Code and the constitutional right of due process because signs about the time limit are not posted on Los Angeles streets, which have long had parking signs related to street sweeping, permits and other restrictions. And the city acknowledges that no such 72-hour signs have ever been installed.

"We did not know about the rule," Sackman said. "We have a city parking permit and we always park in accordance with the street signs. It's a daily routine for us. But even if you try to follow the law and the signs scrupulously, you can still get towed."

On Jan. 6, the Sackmans, who live in the Sawtelle neighborhood of West Los Angeles, sued the city and Greg Savelli, the transportation department's head of parking enforcement and traffic control.

The suit asks the court to declare the restriction illegal and order the city to stop enforcing the 72-hour limit. The couple also want damages and refunds of the fine and impound fee.

If they win, it could mean that the Los Angeles Department of Transportation has been improperly impounding thousands of vehicles.

To retrieve the Sienna, the Sackmans say, they spent about an hour of their time and paid a $274.20 impound fee plus a $68 fine. If those same fines and fees were applied to the vehicles cited last year, the total would be about $1.55 million. The fees, however, depend on how long a car is impounded.

U.S. District Judge Dolly M. Gee of Los Angeles is scheduled to hear motions May 8, including a request by city lawyers to dismiss the case. They claim the ordinance complies with the vehicle code and that past federal court decisions have supported the 72-hour restriction.

City officials say the restriction is necessary in a place as car-crowded as Los Angeles to keep neighborhoods streets from becoming long-term parking lots or a dumping ground for abandoned vehicles.

According to the lawsuit, the controversy began Sept. 12 when the Sackmans left for San Francisco. On that day, court papers state, someone in their neighborhood flagged down a parking enforcement officer and lodged an anonymous complaint about the couple's car.

The officer marked a tire, and the van was ticketed three days later. Then on Wednesday, Sept. 17, the car was towed and impounded, according to the lawsuit.

Although they returned home the day their car was towed, the Sackmans say they did not discover it was gone until Thursday, when David wanted to drive the car to work.

The Sackmans assert that they only learned about the 72-hour time limit when they recovered the vehicle later that morning. They appealed the parking citation in November but lost. In the aftermath, the couple launched a Facebook page titled "No Stealth Towing."

"I just found it all very annoying," Jerolyn Sackman said. "To me, the law doesn't take into consideration how people live in Los Angeles. There are lots of apartments and condos where we are. There's no way there's enough parking for the people who live here."

The Sackmans contend that the California Vehicle Code limits the circumstances under which law enforcement officers and parking officials can have cars, trucks and motorcycles towed. According to the code, "a vehicle shall not be removed unless signs are posted giving notice of removal."

Without the sign, the lawsuit alleges, the couple were denied the constitutional right of due process, which means that people must be given notice of the proceedings involving them and an opportunity to be heard before the government can take away one's life, liberty or property.

"No notice of the 72-hour restriction is provided and instead residents of the city are tricked into believing that they are parking legally by the failure to post signs notifying them of these restrictions," the lawsuit states.

The Sackmans also allege that the time limit does not serve the government's interest because it is only enforced after receiving anonymous complaints from citizens — a process that opens the door to reports based on someone's prejudices, either racial or otherwise, about their neighbors.

"It's a gamble to park every day in my neighborhood," David Sackman said.

A spokesman for City Atty. Mike Feuer declined to comment on the case, stating it was policy not to discuss pending lawsuits.

Though acknowledging that warning signs about the 72-hour limit have not been posted on Los Angeles streets, the city's motion to dismiss argues that the Sackmans' were not denied due process.

In court papers, Deputy City Atty. Gerald M. Sato noted several court decisions that rejected the argument that a prior warning was constitutionally required before a vehicle can be towed for violating a 72-hour limit.

Sato argued that the City Council's adoption of the parking restriction was adequate notice and that the limit did not hurt the Sackmans' interest in their car because the vehicle was not being used for at least 72 hours before it was impounded.

Citing the earlier cases, Sato argued that due process also was not necessary because the risk of an erroneous impoundment was very small and, if the issue arose, it could be addressed at a hearing after impoundment.

In conclusion, Sato wrote, "Perhaps it is too broad a generalization to state, as everyone learned in grammar school, that ignorance of the law is no defense."

The couple contends, however, that at least one case cited by the city attorney involved a chronic parking offender who was aware of the parking restriction. They also say that a federal appeals court noted in the same case that the impacts on a first-time violator of "towing without notice cannot be justified as a means of deterring illegal parking."

The Sackmans say that since their car was impounded, they have revised their parking routine. They move their cars every 72 hours, and David drives to work more to avoid keeping a car on the street.

Now, if the couple go out of town, they park one of their cars at Jerolyn's parents' house near Los Angeles International Airport to prevent getting towed again.

Meanwhile, their lawsuit is pending.