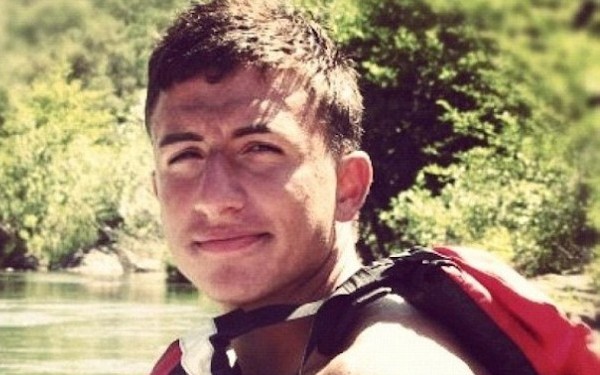 A UC Berkeley student who disappeared over the weekend in Los Angeles after attending a fraternity party was struck and killed by a car on the freeway, authorities said Monday.

Eloi Vasquez, a 19-year-old freshman who was on the soccer team, was reportedly seen running across Interstate 10 east of Vermont Avenue about 2:30 a.m. Saturday and was hit by a car, according to the California Highway Patrol. The Los Angeles County coroner identified his body.

Vasquez had last been seen leaving the Tau Kappa Epsilon fraternity house near the University of Southern California early Saturday. He told a friend in a cell-phone call that he had been drinking, that he was lost and in trouble, and that he was thinking about walking to the beach, his family said.

His cell phone later went dead. Friends said he didn’t have his wallet or identification with him.

His mother, Wendy vMargolin, 46, of Novato, and her two younger sons had gone to Los Angeles to look for him before his death was confirmed.

Classes at UC Berkeley resumed Monday after students were off for spring break.

At a news conference Monday afternoon, Vasquez’s coaches and teammates mourned his loss.

“His impact was huge, certainly on me,” said head coach Kevin Grimes. “I really loved Eloi.”

Grimes said Vasquez frequently stayed late after training to hone his skills. He cited reports by his high school coaches that they had to “change the lock on their shed” because he worked so hard.

Alex Mangels, a fellow Cal soccer player, said, “Although sometimes he was soft-spoken, Eloi always had a way ...” He paused, struggling to control his emotion. “He always had a way of making you laugh, and he brought energy to the room.”

Mangels said Vasquez “loved soccer, and it was his passion. We’ll all praying for his family and everyone involved. He’ll be greatly missed and forever be with us.”

Vasquez went to a party at the fraternity with soccer-team friends Friday night. He was last seen leaving the fraternity at 631 W. 28th St. in Los Angeles about 1:30 a.m. Saturday.

He called his friend Aurora Cardenas in Berkeley at 1:57 a.m., telling her that he was lost and asking her to come and help him. Cardenas said she had urged him to call his friends who were with him at the party. The two spoke for about 12 minutes.

Before her son’s death was confirmed, Margolin said her son has gone to parties in the past but knew his boundaries. “He’s an athlete, and he’s very careful about partying too much,” she said. “He goes to bed early and wants to stay in shape for his athletics.”

Local News
Healthy food is hard to come by in South L.A. These 3 activists are changing that
300 views