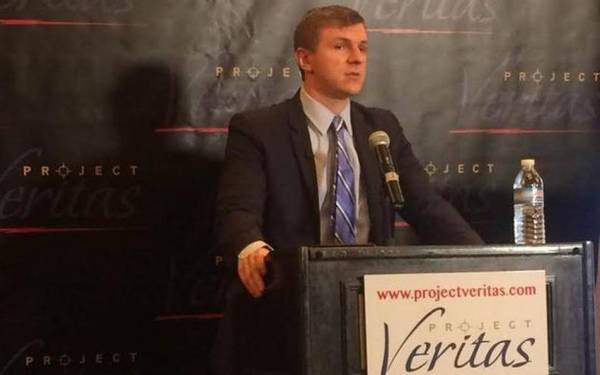 James O’Keefe is a self-described “guerrilla journalist and muckraker” known for his baiting tactics on video. On Monday, in an airport Hilton hotel conference room off State Road 836, his team handed out press kits and he talked about the campaign of catching college officials embracing the terror group by endorsing a mock club.

“Brace yourselves, this one is beyond anything you’ve ever seen,” O’Keefe tweeted Monday morning. After the event, he then took to Twitter to tout the media attention.

Here’s what led to his “gotcha” announcement Monday: A Barry student reached out to O’Keefe’s group, Project Veritas, which then cooked up a plan for a fake pro-ISIS club and to get Barry University staffers on board.

Barry never approved the club and O’Keefe’s group had no intention of running it. One of the Barry campus coordinators even suggested that “ISIS” be omitted from the club name in favor of “Middle East.”

“It is immensely hurtful to our university community, to the Dominican Sisters of Adrian, Michigan, who founded and continue to sponsor Barry University, and to the international members of the Dominican Order who have suffered as a result of the violence created by ISIS,” Sister Linda Bevilacqua, the university president, said in a statement Monday.

The video shows a series of visits the undercover student had with college coordinators about the steps to start the club, Sympathetic Students in Support of the Islamic State.

At first, the student, whose name Project Veritas did not divulge, said she wanted to form “the humanitarian club” to raise money for widows and children of dead Islamic State fighters. The student also mentioned she wants to buy flashlights for fighters being attacked at night so that they can protect themselves.

This is the second time O’Keefe’s group has gone after a college on ISIS. Last week, Project Veritas released a video showing a Cornell dean who advised another undercover student on how to start and fund a pro-ISIS student club.

“We believe that taxpayers and parents need to know what’s happening at universities across the country,” O’Keefe said. “People have talked about some of the malfeasance happening on campuses, about the mentality of professors and administrators and we want to expose that.”

Barry University didn’t take too kindly to the campaign.

“Barry University does not and never will allow or authorize the formation of an ISIS-related humanitarian aid group on campus. There has been no formation of any such group at Barry University. No paperwork requesting such an organization has ever been filed with the proper authorities at the University,” Bevilacqua said.

“The images and video released were edited and spliced to unfairly represent the university and staff being featured. It is reprehensible to think any organization would acquire video and edit in such a way as to denigrate the reputation of Barry University or its staff.”

In 2012, the organization released a video showing an undercover operative proposing a voter-fraud plan to the son of a congressman working on the campaign of his father, Democratic Rep. Jim Moran of Virginia. Patrick Moran resigned soon thereafter.

But in 2010, O’Keefe’s attempt to break into Sen. Mary Landrieu’s office in Baton Rouge, La., disguised as telephone technicians, backfired. O’Keefe and his three partners wanted to tap the Democratic senator’s phone lines and record her conversations. As a result, O’Keefe pleaded guilty to entering federal property under false pretenses, and he was ordered to pay a $1,500 fine while serving three years of probation.

At Barry, university officials said they weren’t aware that the student was videotaping the three club coordinators, and indicated that the recordings are illegally obtained.

“We don’t believe it was illegal,” O’Keefe said. “There was no expectation of privacy.”