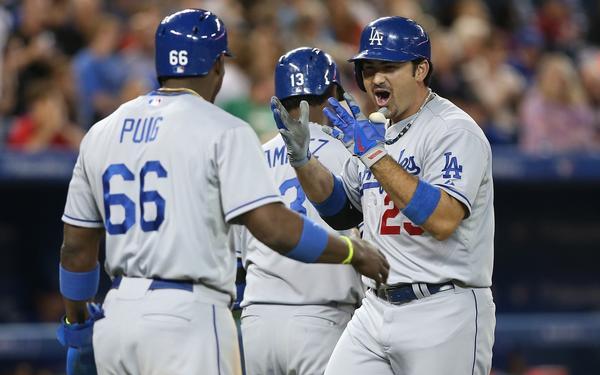 With the Dodgers scheduled to break camp Wednesday, Adrian Gonzalez was among several veterans permitted to travel to Los Angeles a day early.

As Gonzalez packed his bags, he sounded upbeat about how the lineup has looked during the exhibition season, which will conclude in Southern California with the three-game Freeway Series against the Angels.

The Dodgers' 46 home runs are the most in baseball this spring. Their .286 average is sixth-best.

Right fielder Yasiel Puig batted second — with Gonzalez behind him — in the Dodgers' 2-1 loss to the Chicago White Sox on Tuesday.

Mattingly said he wants Puig and Gonzalez to be paired, either in the second and third spots or the third and fourth.

"With him, if he gets on base, he creates a threat to the pitcher, the pitcher worries about him a little more, may make more mistakes to me," the first baseman said. "And I'm protecting him a little bit."

However, Gonzalez downplayed the idea that his presence would automatically result in increased production for Puig.

Rookie Joc Pederson didn't play, but is expected to be the team's primary center fielder. Pederson, who leads the Dodgers with six spring home runs, could start the season as the No. 8 hitter.

Andre Ethier was removed from Tuesday's game in the second inning after he was struck in the right elbow by a pitch from Carlos Rodon. The results of an X-ray were negative and the Dodgers said Ethier could play as early as Thursday in the opening game of the Freeway Series. Ethier is batting .313 in the exhibition season.

Relievers Dustin McGowan and Mike Adams were informed they wouldn't be on the opening-day roster.

The hard-throwing McGowan was on the 40-man roster on a minimum-salary contract that included a $1-million bonus if he made the team. He is expected to be released, though he could be re-signed to a minor league contract. He posted a 6.75 earned-run average in seven spring appearances.

Adams, in camp as a nonroster player, will start his season at triple-A Oklahoma City. He will be paid a retention fee of $100,000. Adams pitched in five Cactus League games, posting a 9.64 ERA.

Right-hander Chad Gaudin was diagnosed with nerve irritation in his neck and will remain in Arizona to rehabilitate when the Dodgers break camp. . . . With Gaudin and Erik Bedard sidelined, the Dodgers signed two-time All-Star Freddy Garcia to a minor league contract to be part of their triple-A pitching staff. Garcia, 38, pitched in Taiwan last year.