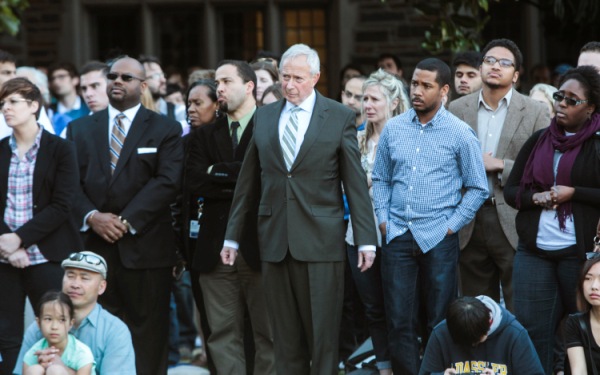 DURHAM, N.C. — A noose found outside the main student center at Duke University thrust the campus into turmoil Wednesday, prompting an investigation, a student march and a forum that drew hundreds to the steps of Duke Chapel.

The gathering was the culmination of a tense day. The noose was discovered around 2 a.m. in the Bryan Center plaza. Word spread quickly on social media, as students posted photographs of the yellow rope dangling from a tree. Duke police responded, and officials launched an investigation to hold the perpetrators accountable.

The incident caused distress on what should have been a day of excitement as the Duke men’s basketball team prepares to play in the Final Four this weekend. Tours were underway for parents and high school students considering Duke, and the campus was bright with spring blooms.

By midday, the Black Student Alliance led a crowd of students who marched to the area where the noose was found. There, tacked to a tree trunk, a sign said: “To the cowards of Duke University. We are not afraid. We stand together.”

People huddled, some arm in arm. A circle of students embraced and bowed their heads, as if in prayer.

Amani Carson, a sophomore from Rye, N.Y., said she had passed by the spot about 11 p.m. Tuesday and saw nothing. Then, around 2 a.m., social media exploded with news of the discovery. She kept turning her phone off and on, trying to process what she was reading.

“Is this a joke? Because this can’t happen,” she recalled thinking. “But it did.”

Carson said she had hosted an African-American high school student last weekend and was thankful the noose didn’t appear then. But now she wonders what she’ll tell the student.

“I don’t know how in good conscience I can tell her to come here, because I don’t even know if I feel safe,” said Carson, who was raised in Massachusetts. “Like, what am I supposed to say?”

People made their way to the chapel late in the day where speakers, one by one, denounced the act. A Duke administrator estimated the crowd at more than 1,000. Some held signs, and others hugged with tears in their eyes.

“I cannot imagine any one of my classmates’ hands tying that knot,” said Lavanya Sunder, president of Duke Student Government.

But she added that she could not deny the racial tension that has escalated at Duke in recent weeks. “It would be to invalidate the experiences of students of color who go every day, feeling unsupported or underestimated or invisible.”

Last week at Duke, a student reported hearing racist comments from another student on campus on March 22. The university is investigating that incident.

A group called the Duke People of Color Caucus said the student, a black female, encountered white male students on Duke’s East Campus who sang the same racist chant that was recited by members of the Sigma Alpha Epsilon fraternity at the University of Oklahoma. A video of that chant went viral and prompted the shutdown of the fraternity and the expulsion of two students.

Since the March 22 event, some Duke students started a social media campaign under the hashtag #WhatWeNeedFromDuke. Dozens of Post-It Notes outside the Black Student Alliance office offered suggestions, such as, “I need Duke to value its black students beyond a basketball court” and “I need to feel like I belong” and “Stop saying affirmative action got me here. I got me here!”

Some black students speculated Wednesday that the noose represented a backlash to their comments during the past week and a half.

On Wednesday, the Duke People of Color Caucus posted a photograph of the noose with this statement: “To all black students, staff, faculty, and/or Durhamites on campus and in the area: Please take care of yourselves and each other. This campus is not a safe space, and has proven beyond any doubt that it is a hostile environment for any and all black people.”

At the chapel forum, Provost Sally Kornbluth elicited cheers when she encouraged faculty to talk about racism in class.

“You have black students in your classrooms, you need to understand what they’re feeling,” she said. “You need to think about your roles as mentors, as teachers, as role models. We all need to be together in setting up a safe space.”

Brodhead and Kornbluth pledged to implement a list of suggested changes from the Black Student Alliance. Brodhead talked with the group Wednesday in a meeting that had been set up before the noose incident.

Duke also required residence hall advisers to set up informal sessions for discussion across campus for the rest of this week.

Jason Ross, president of the National Panhellenic Council, said the huge crowd at the chapel event brought tears to his eyes. But he pointed out that it took a noose to bring that many people together. The reality, he said, is that micro-aggressions occur every day on the campus.