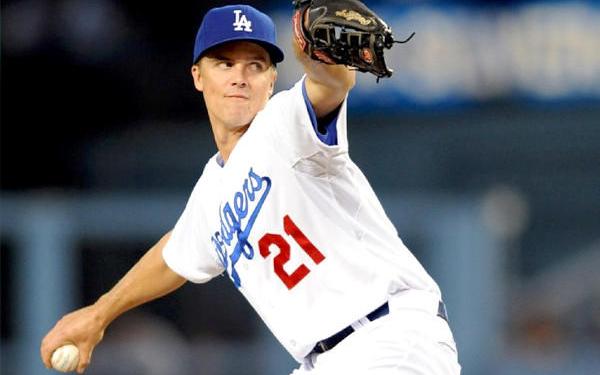 That was the point, really. Greinke needed to stretch his right arm to regular-season standards, to get into the flow of pitching a long game — and he did, throwing 85 pitches over seven innings of a Single-A intrasquad game.

“A slight mechanical change” that Greinke made on his final pitch of the fifth inning.

Greinke allowed the home run to Vela and two well-struck fly ball outs to begin the fifth. Then, making the change, he threw a fastball and got a ground-ball out.

As Greinke recalled, “I said, ‘I’ve got to try something else because this is bad’ and the pitch came out perfect. I might have finally started doing something right.”

Yasmani Grandal, who was catching Greinke for the third time in a game, said he noticed the change too. So did Dodgers pitching coach Rick Honeycutt.

“At the very same time Honeycutt was coming to tell me what I needed to change and it was exactly what was just changed,” Greinke said. “Hopefully it’s a good change. We’ll see.”

Greinke is slated to start the Dodgers’ second game of the season, on Tuesday against the San Diego Padres.

Clayton Kershaw, who started the Dodgers’ major-league game against the Kansas City Royals, only threw three innings Wednesday. Brandon McCarthy, who starts Saturday against the Angels, and Brett Anderson, who starts Sunday, are slated for similarly short outings.

But Greinke was allowed to throw up to 90 pitches in his final exhibition start because he was set back at the beginning of camp by a lubricating injection in his right elbow. He’s reported no issues with the elbow since.

McGowan had already been informed that he wasn’t going to be on the Opening Day roster. He signed a one-year contract early in camp and was due a retention bonus if the Dodgers decided to keep him on the roster into the regular season. By releasing McGowan, the Dodgers save some money and simultaneously open a spot on the 40-man roster.

That spot might go to non-roster invitees Sergio Santos, David Aardsma or David Huff. Huff, a left-hander, could fill a long-relief role or make some spot starts in April and beyond, with Hyun-Jin Ryu expected to be out until the end of the month.

Santos and Aardsma, both right-handers, remain in the running for roster spots with only the three-game Freeway Series against the Angels remaining on the Dodgers’ exhibition schedule.

Dodgers manager Don Mattingly said the Freeway Series will be used to resolve some of the bullpen questions.

“I don’t think, with conversations we’ve had, that we’ve made a decision” about the bullpen, Mattingly said. “That speaks to (the fact that) there’s a number of guys that have thrown the ball well. How do we put that together?”

Angels pitcher C.J. Wilson struck out 10 batters over 6 2/3 innings, allowing five hits and two runs, in a minor-league game. … Angels pitcher Garrett Richards is scheduled to pitch minor-league games in Arizona today and April 9. … The eligibility of outfielder Josh Hamilton remained in limbo as the Angels broke camp. Hamilton is awaiting discipline from Major League Baseball for a widely reported cocaine relapse, a violation of his mandatory treatment program. … Angels manager Mike Scioscia said that Hamilton, who is recovering from February shoulder surgery, began hitting off a tee last week. … 150 regular-season Dodgers games will be televised in Spanish on SportsNet LA, with Pepe Yniguez (play-by-play), Fernando Valenzuela (analyst) and Manny Mota (analyst, select games) in the booth. … Ned Colletti will serve as a TV analyst for Dodgers games in English this season, beginning Opening Day. The senior advisor and former general manager was an analyst for select games in spring training. … Angels outfielder Mike Trout led all MLB players in spring training with an .824 slugging percentage and 1.340 OPS (on-base plus slugging). He was second in runs scored (18), second in batting average (.517) and third in on-base percentage (.517). ... The Angels’ .295 team batting average ranked second. … The Dodgers and Chicago Cubs co-led all teams with 47 home runs in spring training.