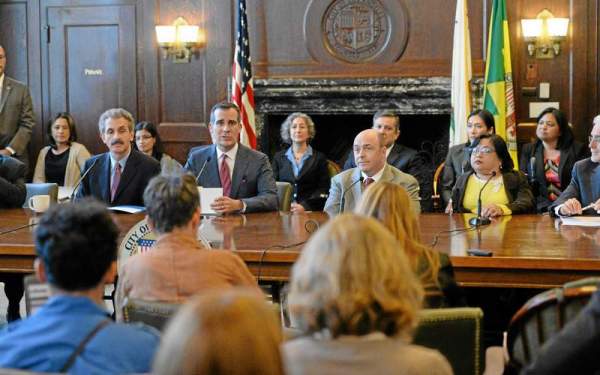 Los Angeles will spend more than $1 billion to fix the city’s broken and crumbling sidewalks as part of a lawsuit settlement brought by plaintiffs who contend the walkways are inaccessible for the disabled.

Under the deal, which requires a judge’s approval, Los Angeles will spend roughly $30 million a year over three decades on sidewalk repairs and curb work throughout the city. The money allocated is adjusted for inflation.

The 2010 lawsuit brought attention to the city’s buckling and broken sidewalks and the inconsistent city funding allocated for the walkways. The city budgeted zero dollars in some years for sidewalk repairs, said Los Angeles City Councilman Paul Krekorian, who called the state of Los Angeles’ sidewalks a “disgrace” at Wednesday’s press conference.

Forty percent of the city’s sidewalks need repair, according to one city estimates.

Resident Mark Willits and several others sued the city five years ago, claiming that disabled residents were forced to ride in the streets because of “inaccessible sidewalks due to lack of curb ramps or broken or constricted sidewalks.”

“Despite its awareness for the past several years of the city’s broken system of sidewalks and consequential denial of meaningful access for persons with mobility disabilities,” the lawsuit stated, “the city has failed to develop or implement a plan to effectively address the problem.”

Lillibeth Navarro, executive director of Communities Actively Living Independent and Free, who was a part of the lawsuit, said the disabled “risked their lives and safety” traversing the city’s sidewalks.

The settlement will help others in Los Angeles, she added.

Under the settlement, the city will install curb ramps, fix sidewalks that are broken and torn up by tree roots and install accessible sidewalks where they do not exist.

While the $30 million-a-year allocation is slated to come out of the city’s general fund, federal funds can also be sought to pay for fixes, said Branimir Kvartuc, spokesman for City Councilman Joe Buscaino.

Krekorian, who chairs the city’s Budget and Finance Committee, called the settlement a “win” for the city budget, noting Los Angeles pays out $5 million a year in injury claims from people falling on city sidewalks.

The deal announced Wednesday by the City Council and Garcetti also settles several other claims brought against the city over sidewalk issues.

Asked what changed and led to a settlement, Wallace said: “I think we got better leadership.”