Furious 7: A family revved for action 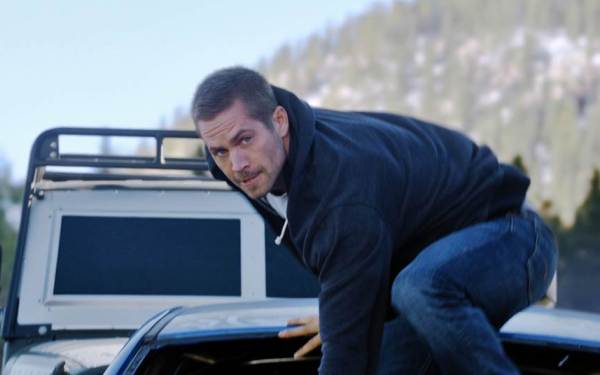 When it was first released in 2001, “The Fast and the Furious” didn’t seem the kind of stuff franchises are built on.

Set in the gritty world of Los Angeles street racing, the movie boasted flashy action sequences but had no muscle-bound superheroes, suave spies or supernatural teens. The actors in its ensemble — Paul Walker, Vin Diesel, Michelle Rodriguez — weren’t stars who most people would recognize on the street.

But producer Neil Moritz was confident the film would resonate with audiences. He’d seen how it played at the first test screening in Chatsworth, where as he recalls moviegoers “went crazy” for the movie.

“They were out in the parking lot afterwards doing donuts and revving their engines,” said Moritz, who has stayed with the franchise since the beginning, including its latest incarnation, “Furious 7.” “I knew we had something special.”

The first film grossed more than $200 million worldwide, spawning a franchise that supplies Universal Pictures with the kind of adrenaline (not to mention cash) that studios live by these days. By building on the films multicultural base to help market it globally and amping up the spectacle and stunts, the franchise just keeps getting bigger.

This weekend “Furious 7” is expected to take in around $100 million at the domestic box office. That would mark the largest opening ever for the series, which has so far collected more than $2 billion globally.

“The first film was made as sort of a counterculture, midrange-budgeted action film with a definitive concept at the center of it,” said Donna Langley, Universal Pictures’ chairman. “Over the years, we’ve been able to grow the franchise creatively to make it global. A little bit of timing and a lot of strategy has worked in our favor.”

Even the franchise’s creators admit that initially the series was largely about hot cars and hot girls and guys. The stunts in the films have grown increasingly outlandish — at one point in “Furious 7” the crew drives cars out of an airplane and parachutes onto a mountain road — but filmmakers have attempted to play up the series’ emphasis on family.

The multiethnic cast is tightknit on- and off-screen. Some of the film’s stars, such as Jordana Brewster and Tyrese Gibson, rarely even act in movies outside the franchise. The cast’s bond deepened when Walker — often referred to as Diesel’s brother — was killed in a car accident in late 2013. (The actor’s death occurred midway through production on “Furious 7,” so he appears in the new film — though some of his scenes were completed with the aid of special effects.)

While bigger names have been added to the franchise over time — Jason Statham and Kurt Russell have roles in “Furious 7” — its core has remained intact, a rarity for a multi-year project. By contrast the “James Bond” franchise has swapped out the actors for the title role multiple times. Other modern franchise films and characters such as Batman and Spideman have changed casts and concepts frequently.

Noted Universal’s Langley: “We look at the franchise much like a TV series where we’ve created characters that the audience has become connected to and familiar with.”

New directors have been brought in for different films, bringing fresh energy and sensibilities to the franchise. James Wan, who directed “Furious 7,” comes from the world of low-budget horror flicks.

The action in the most recent “Furious” films take places around the globe. “Furious 7” goes from London to Los Angeles, Tokyo, the Dominican Republic, Abu Dhabi and back to Los Angeles. In fact, it was the franchise’s migration out of the U.S. with 2006’s “Tokyo Drift” that got it back on track.

At the time, Universal was considering releasing the third installment straight to video because Diesel and Walker were not a part of it. That was when screenwriter Chris Morgan responded to an open call and pitched studio executives on moving the series to Tokyo.

“I told them I thought DVD was the wrong way to do it,” said Morgan. “I didn’t want to be known as the guy who was the franchise killer. They wanted to set the film in high school, and I started spitballing my idea about going global. Yes, that provides exotic locations and interesting set pieces, but I think it works because the crew represents something that is about acceptance — it doesn’t matter where you are or what you do.”

Of course, it also helped that Diesel and Walker returned for the fourth installment in 2009.

“[Universal] kept the core family of cast but infused some new blood in there, almost like guest stars on old TV shows,” said Paul Dergarabedian, a senior media analyst at research firm Rentrak. “And they also amped up the action ... it became more than just a fast cars, hot girls, good-looking guys kind of movie.”

The franchise was on a roll until Walker’s unexpected death, which caused the studio to question whether to scrap one of its most lucrative properties.

“We were, like, ‘OK, we’re done. We had a good run,’” Moritz recalled. “We didn’t know how — emotionally — we could finish this movie without Paul. But the studio let us grieve and try to figure out what the right thing to do for him would be.”

Langley said “the first 24 hours after [Walker’s death] were critical” because that time helped established how the studio was going to move forward.

“Our job was to do it in the most respectful way and create a legacy for him that he would be proud of,” she said. “That was the sentiment and the thing that carried everybody through from that moment until a couple of weeks ago when we finally finished the film.”

The release date was shifted from summer 2014 to accommodate the delay. Caleb Walker and Cody Walker, Paul’s brothers, were brought in as stand-ins. Computer effects were used for facial replacement to complete Walker’s remaining scenes.

“Cody and Caleb have mannerisms like Paul,” said director Wan. “They moved like Paul, talked like Paul — in a lot of ways it gave the actors closure. I think at the end of the day that was the right thing to do for all of us.”

Morgan also decided to leave Walker’s dangerous action scenes intact — even if they called to mind the way in which the actor died.

“We had those discussions at first, but to not have [Walker’s character] Brian in situations that Brian would be in would call more attention to it,” the writer said. “The joy and surprise is if you didn’t know that Paul Walker had passed away, you’d have no idea while watching this — and that’s the point. The movie feels genuine and fun, and I don’t think you really dwell on his death.”

“I think there’s a lot of gas left in the tank still,” Langley said.