Nearly a year after a shooting partially paralyzed him, a boy is rebuilding hope 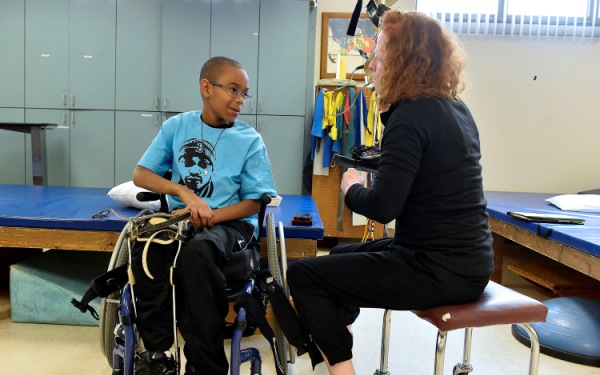 Ka’Vyea Tyson-Curry’s grip tightens as he pulls his body from his wheelchair toward the walker positioned in front of him. With a quick upward thrust — and a little assist from his physical therapist — the 11-year-old boy stands. Silently, he counts. He reaches 17, 18, then 19.

“I just beat my goal — 20 seconds,” he proclaims before plopping back into the wheelchair. “Next is 45 seconds.”

Simple goals for a not-so-simple life.

April marks a year since a gunman’s bullets ripped apart the lives of Ka’Vyea and his mother, Tanesha Tyson. Ka’Vyea and his dad had gone on a quick run April 18 to get candy and juice from a gas station. As Ka’Vyea’s dad slid back into his car, a gunman approached. Eight shots from a .40-caliber handgun poured into their vehicle. Of the three occupants, only a 5-year-old passenger escaped injury.

Another bullet sliced into the middle of young Ka’Vyea’s back, hitting his spine and paralyzing him from the mid-chest down. Hospitalized for the next three months, he missed his father’s funeral and the final weeks of fourth grade. He struggled against the ventilator and hated the tracheotomy and feeding tube.

Authorities called the gunman’s actions swift and senselessly violent but have not revealed a motive. Prosecutors charged a suspect, 28-year-old Dontae D. Jefferson, with first-degree murder and five other felonies. A trial tentatively is set for April 13.

The shooting enraged a community already fed up with senseless and repeated violence.

“Ka’Vyea’s experience is just one more tragic example of why we need to get guns out of the hands of criminals,” Mayor Sly James said recently. “Ten- and 11-year-olds should be going to school, playing in parks, reading books and having fun with friends, not undergoing paralysis rehabilitation and mourning the loss of a father who he watched get shot and died in front of him.”

Since the shooting, Ka’Vyea’s journey has involved a slow series of methodical movements toward recovery and gaining back some pieces of normalcy: multiple surgeries, a return home, physical therapy, going back to school and welcoming a new family member — a gray, floppy-eared rabbit named Jupiter.

Ka’Vyea dresses himself but needs his mother to put on the torso brace that provides upper body support and prevents him from slouching. Whenever he needs to use the restroom or get in the car, she carries him there.

“I just adjust to the situation,” said the fifth-grader.

During a recent physical therapy session, Ka’Vyea got fitted for a pair of trial leg braces. Someday they could allow Ka’Vyea to maintain a standing balance, to become accustomed again to being upright, said Michele Ahern, his therapist at the Rehabilitation Institute of Kansas City.

“We call it basically resting on his Y-ligaments,” Ahern explained. “That way, he expends as little energy as possible, just trying to maintain his balance with his arms.”

Under her watchful eye, Ka’Vyea completes several repetitions of standing and then lowering himself into his wheelchair. Ahern stands at his side, ready to ensure he doesn’t fall or injure himself.

“From when he was initially admitted to where he is now, he has made a ton of progress in regards to his functional mobility,” Ahern said. “… He is pretty much independent.”

Nearby, his 31-year-old mother, Tanesha Tyson, records Ka’Vyea’s progress on her cellphone.

“We are still hoping that it comes back one day,” she said of his ability to walk. “They said it is a complete (spinal cord) injury — less than 10 percent likely that he will get anything back.”

Later, as Ahern supports his waist, a standing Ka’Vyea grips the aluminum walker and lifts his body forward several inches. The inches soon graduate to several feet. Then several more feet until Ka’Vyea has moved forward about 50 feet.

“Pushing up with these bars gives me a little bit more height,” Ka’Vyea says during a pause. “Just imagine pushing yourself up without the use of your legs.

“I had my whole family do that once, and every one of them cheated except the little one. I saw their bones straightening up.”

As the therapy session ends, Ka’Vyea stretches out his arms and beckons his mother. She grins, walks over and leans close.

Ka’Vyea wraps his arms around her and rests his head against her chest. They hug.

When asked about what happened the night of the shooting, Ka’Vyea falls silent.

He misses his father.

He thinks about him often.

Vivid memories of the shooting still haunt him.

Before that night, Ka’Vyea lived as a typical boy, frequently playing outside, running and riding his scooter with relatives and friends. He now deals with realities that rarely befall young boys.

His mother gave up her job with the family construction business to care for him. That includes attending physical therapy sessions at the school and two each week at the rehab institute. Then there’s the weekly session with a counselor.

Every day, Ka’Vyea takes a regimen of medication to control his bladder, bowels and anxiety.

“He doesn’t believe in God anymore because he said why would He have done that to him?” Tyson said. “I tell him that it wasn’t God that did that. It was the devil.”

The family has moved to a three-bedroom Raytown house that has a ramp for Ka’Vyea’s wheelchair. Abstract artwork he created during his three-month hospital stay using syringes filled with blue and green paint accent his bedroom’s beige walls.

A pillbox occupies a nightstand along with Ka’Vyea’s other constant companions: a cellphone and a Nintendo DS.

Jupiter’s cage and pen fill a corner of the bedroom.

“Whenever I wake up in the middle of the night, I see my rabbit staring at me,” Ka’Vyea said as a grin spreads across his face. “So my rabbit is kind of a creep. He watches me while I sleep.”

Before the shooting, Ka’Vyea wanted to become a zoologist and study animals.

“Those dreams kind of went downhill,” he laments. “I don’t think I can do that anymore. It would be hard getting to the places to study the animals.”

Ka’Vyea will become more independent as he continues with his physical therapy, Ahern said. When he is old enough, he’ll learn how to drive a specially equipped car. He’ll learn how to get in and out of a vehicle on his own, including breaking down his wheelchair and loading it.

For now, his teachers and classmates provide support. Each day, a group of his classmates share lunch with him in an area near the principal’s office.

These days, what does Ka’Vyea dream of doing for a living?

He’s undecided, though he still likes reading about animals.

How he will spend April 18, the first anniversary of the day that darkened his life?

At home, he said.

He’ll be safe there, his mom said.

A simple goal for a not-so-simple life.