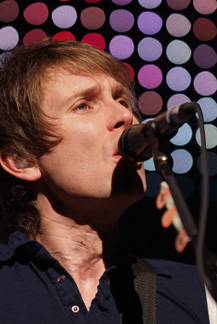 “Morning Becomes Eclectic,” KCRW’s music program that, pre-103.1, was the only place to hear the debut of Death Cab for Cutie, Jem or Franz Ferdinand, has the somewhat peculiar habit of either having an in toto phenomenal show or an “eh” show – there’s never a “good, but not great.”

By the time the last-true-DJ-left-in-America Nic Harcourt thanks his producers, the three-hour indie-to-esoteric musical pantheon has either proved to be a bastion of new tracks to download from iTunes or confirmation that some bands remain out-of-the-mainstream for a reason.

With minor exception, “A Sounds Eclectic Evening,” the fifth-annual concert-version of its FM counterpart that took over the Gibson Amphitheater show on March 25, proved to be the latter. Eh.

There’s a screenwriting adage that says if you have a phenomenal ending you’ll be forgiven for a slow opening. Harcourt should have saved Ben Harper and his band, the Innocent Criminals, or surprise guests Franz Ferdinand, for the finale. Both performers infused the show with, to borrow Ferdinand lingo, a wee bit of energy in an otherwise low-key evening.

Jumping around the stage and smacking his chest, Harper philosophized in pop with “Better Way,” invoked Bob Marley with special guest, his son Ziggy, for a rendition of his father’s “War,” and turned the social-folk music of the ‘70s into ‘00s social-funk for the Katrina inspired “Black Rain.”

Following Harper was the equally energetic Franz Ferdinand. Partially because Franz’s session was a surprise, the band brought the entire house to its feet for the first time all evening (some two hours in), as the Scottish rockers essentially played an EP of its greatest hits, including perennial favorite (for music-philes and advertisers alike) “Take Me Out.”

Death Cab for Cutie, who, prior to the special guests and Harper’s performance, was the headliner of the evening, seemed overly subdued as the final performers. It’s possible to infuse melancholy musical meanderings with energy – Jem’s performance two years prior proved this – but Death Cab couldn’t maintain the momentum lied down by its predecessors. As for the other performers of the evening – Goldspot, Sia, Gomez, Britt Daniel (of Spoon) and Feist – only Australian Sia, of electronica band Zero-7, got the crowd to its feet. Her cutesy bumbling personality – complaining of her pants falling down, starting a song over after missing lyrics, ranting about sweaty thighs and stockings – garnered the ovation for her humanity, as well as, her Tori Amos-esque haunting tunes.
Article posted on 4/4/2006
This article has been viewed 1172 times.