'Louie,' 'The Comedians' put a lock on TV's funniest hour 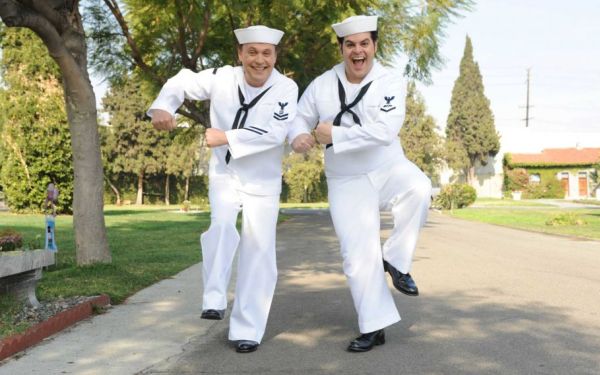 “Louie” has finally made a friend — and, boy, is it funny.

As of Thursday, April 9, FX will be able lay claim to having the funniest hour of the week, with the premiere of the show “The Comedians” as a lead-in to the fifth season of the network’s multiple-Emmy-winner “Louie.” It’s probably a good thing FX added “The Comedians” to the mix because at this point, the only thing left to say about Louis C.K.’s show is that if you haven’t seen it, either you’re dead or don’t love great comedy.

“The Comedians” pairs Billy Crystal and Josh Gad as comedians who don’t like each other much, have entirely different concepts of comedy (owing in part to a sizable generation gap) and, naturally, are forced by a fictionalized (we hope) FX to work together to develop a sketch comedy show called “The Billy & Josh Show.”

At first, Crystal — as a crotchety, egomaniacal version of himself — thinks he’s just going to be doing “The Billy & Billy Show,” playing all the parts himself. We get a taste of what that show would look like when Crystal plays his younger self; Meg Ryan; and the late, beloved Estelle Reiner doing the “I’ll have what she’s having” scene from “When Harry Met Sally.” It’s hilarious, of course, which doesn’t stop the network from deciding there’s too much Billy in “The Billy & Billy Show.” It’s not Billy, they tell Billy — Billy tested great with audiences, but “Billy & Billy” didn’t.

If that makes sense to you, you either are in the TV industry or should seek professional help.

“The Comedians” is based on a Swedish TV series called “Ulveson & Herngren” and is a mockumentary on how Crystal, Gad and FX create “The Billy & Josh Show.” Denis O’Hare plays Denis Grant, the head of the network. (In real life, the network CEO is John Landgraf, who is clearly much smarter than Grant because he green-lighted “Louie” and “The Comedians.”)

“The Billy & Josh Show’s” producer, Kristen Laybourne (Stephnie Weir), is barely holding it together, even before she has to referee two super-egos like Crystal and Gad while keeping the network from pulling the plug on the whole enterprise before it airs.

Guest stars include Steven Weber, Mel Brooks, Rob Reiner, Joe Torre, Sugar Ray Leonard, McG, Tom Kenny and “Frozen” tunesmiths Kristen Anderson-Lopez and Bobby Lopez. Although the voice of Crystal’s real-life wife, Janice, is heard on a car phone call with Billy in the first episode, the fictional Billy’s wife, Julie, is played by Dana Delany, who thinks it would be a wonderful idea to have Josh over to the house to watch sports with Billy’s pals Leonard and Torre. Of course, it is a disaster of epically comic proportions.

The genius of the show isn’t just that Gad and Crystal are hilarious together. It’s that in a single half hour, audiences get full helpings of classic comedy and of the less obviously structured variety practiced by a new generation.

But who would need a lesson in the history of comedy if it didn’t work?

“The Comedians” works and works until you’re ready to fall off your chair. Gad exasperates Crystal at every opportunity, advising him that because Gad’s career-making role in “The Book of Mormon” was so amazing, maybe Crystal might want to give the Great White Way a shot. The Tony-winning “700 Sundays”? Gad had never heard of it.

For his part, Crystal never misses an opportunity to remind Gad, subtly or not so much, that he is way too young to know about comic tradition. Simply throwing a penis reference into a dialogue isn’t a punch line. And, sure, Gad scored with “Mormon” and that whole “Frozen” thing, but what else has he done? “1600 Penn,” a sitcom that didn’t even last a full season?

Crystal and Gad play off each other like intergenerational “Sunshine Boys.” They may have been born in different decades, but they were born to make us laugh.

We’ll still be laughing at the end of the half hour when the fifth season of “Louie” premieres. It’s brilliant and funny, of course, but it also offers yet another variety of comedy for us to ponder. Louie is the kind of guy who would be perfectly happy if the world just left him alone — as long as he didn’t have to feel lonely in the process.

He tries to avoid difficult situations, such as a loudmouth cop (guest Michael Rapaport) who used to date his sister and thinks that’s sufficient grounds for a renewed friendship with Louie, and the unfunny young comic (guest Nate Fernald, who is actually very funny) who seeks his advice.

But time and again, Louie is pulled into one difficult situation after another. Each time, of course, we think, “If only he’d just assert his opinions and desires up front, he could avoid whatever mess invariably ensues later on.” But on the rare occasions when Louie overcomes his natural tendency to keep his distance, he gets clobbered anyway because at the first sign of pushback, he reverts immediately to the misanthrope he really is.

None of this ever gets old, simply because Louis C.K. is a great comic actor, writer and director. The character of Louie is exquisitely crafted in his creator’s mind and on the page long before he delivers his lines. It’s insufficient to call Louie an “everyman.” He is far more complicated than that — and far funnier as well. If Sam Beckett were still around, he’d be rolling in the aisles.