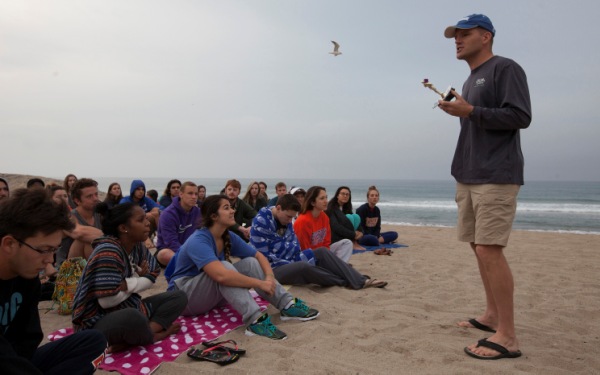 MALIBU, Calif. — On such a gray, nippy morning, most self-respecting college students would pull the covers over their heads and languish for a couple of extra hours in the sack.

But Asa Miller drove 30 miles from Simi Valley to greet the dawn at Zuma Beach.

After spending six years in the Navy, Miller sometimes feels at sea as a 24-year-old freshman at Pepperdine University in Malibu. That’s why he heads to Surf Chapel, a weekly convocation on the sand, to help him get his bearings — by combining a little bit of God and a little bit of wave action.

“Surf Chapel is a chance to refocus the soul and mind,” Miller said. “Being by the beach in the morning gives me perspective, reminding me of my place.”

The Gospels of Matthew, Mark and John all tell of the miracle of Jesus walking on the Sea of Galilee. Nowhere do they mention surfing.

But that matters not to dozens of students from the Christian university as they sit on the beach about 10 miles west of campus, nestled in navy Pepperdine hoodies and wrapped in beach towels to ward off the morning chill.

First they listen to Bible passages and break up into small groups to share emotional highs and lows. Then many of them don wetsuits, grab boards from a Pepperdine recreation department truck and hit the waves.

One might say they give new meaning to the phrase “pray for surf.”

Each Wednesday morning, he carries his surfboard and his New American Standard Bible and wades into the sacred realm of the outdoors, where he expounds the merits of religious belief and community building.

His own faith was built on the move at a succession of mostly nondenominational churches.

Shearer, 47, was born in Atlanta to a military father. The family relocated often, worshiping as Lutherans or Baptists, Shearer said, “whatever the chaplain was.”

He graduated from West Point and served 22 years in the Army, including six months in Baghdad as a lieutenant colonel during the military surge in 2008.

He spent his final military years in Monterey, Calif., where he took to the sometimes chilly water to lend moral support to his son, Will, a novice surfer stoked by the sport. The father, too, was soon hooked.

After retiring from the military in 2012, Shearer began teaching at Pepperdine, where a 125-foot tower with a carved-out cross is one of the most visible landmarks from Pacific Coast Highway. Each week, he and Pepperdine alum Grant Waggoner invited about 10 students, all hardcore surfers, to the beach.

“We really wanted to build a community,” Shearer said. “We both thought college students struggle with ‘Where do I fit in?’ We wanted to be a community where we love God, love each other and love surfing — hopefully, in that order.”

The second year, word spread; 40 people showed up to the first gathering of that 2013 fall semester. Waggoner moved, and Shearer decided to cast a wider net by advertising throughout campus. He also got the university to designate each weekly Surf Chapel as an official convocation. (Students are required to attend 14 convocations each semester.)

The university provides funds to pay for beach permits and to hire a lifeguard. Shearer noted with a smile: “We are the only convocation where you have to sign a release form.”

Surf Chapel now has an average attendance of 80 or so, with the number swelling to more than 100 on warm, sunny days.

“Surf Chapel really responds to today’s college students, who do not have the edifice complex ... that my generation had,” Pepperdine President Andrew K. Benton said. “We needed stucco and tile or brick and mortar to find places to worship.”

One recent Wednesday, students started showing up about 7 a.m., parking their cars along PCH and strolling to an otherwise deserted stretch of broad, white sandy beach.

About 7:30, Shearer strode into their midst, wearing khaki shorts, a long-sleeve T-shirt and a blue Pepperdine cap. He toted a teal-and-ivory-striped surfboard that he promptly began waxing as he greeted the students.

“Waking up is hard,” acknowledged Jayelle Minor, 18, a first-year student who grew up in Los Angeles. “But I love coming here. Some of my favorite people are here. Everybody gets up for it.”

Standing in front of the group, Ray McLagan sang as he strummed his guitar: “Let us become more aware of your presence.”

With a gusty ocean breeze ruffling the sand and a skein of squawking pelicans skimming the water behind him, Shearer read from John 14:

“Do not let your heart be troubled; believe in God, believe also in me.... Thomas said to Him, ‘Lord, we do not know where you are going; how do we know the way?’ Jesus said to him, ‘I am the way, and the truth, and the life; no one comes to the Father but through me.’”

After the reading, Shearer told students: “You’ll find a lot of time in your life you won’t know the way. He’s giving directions. All you have to do is follow.”

Joseph Ramli, 19, a sophomore, grew up in San Diego and loved the beach but had never surfed until he came to Surf Chapel.

“I actually learned to surf here, halfway through my freshman year,” Ramli said. “Everyone’s really encouraging. You don’t feel inferior. We all laugh and talk in the water while waiting for waves.”

Ramli was a co-leader of a small group and asked each person in turn to relate the high and low points of the week and to name the Pop-Tarts flavor he or she would like to try.

Alexis Carrington, 21, a senior majoring in biology, was attending her first Surf Chapel and told the six members in her small group: “This is the high of my week.” Her low? “Realizing I have only two more months (at Pepperdine).” As for the Pop-Tarts flavor? “If they had a cookies and creme....” (She’s in luck.)

Minor’s high was spending spring break with friends on an island off Seattle. The low was forgetting to read a book for a paper that was due.

Members of the group held hands as Ramli said a prayer — for the family of a 21-year-old woman who had been killed the day before by a car on PCH; for good grades and smooth sailing in classes; and, yes, for good waves.

Then a dozen or so hearty wetsuit-wearing worshipers headed into the waves. Even though the surf was small, most of the gremmies repeatedly wiped out. Surfers occasionally came close to colliding. Shearer spilled a few times but popped back up, smiling.

Just past 9:30 a.m., the surfers began heading back to the sand one by one. Class and homework beckoned, and for some, maybe a nap.

Carrington didn’t get on a board this time but vowed she would before graduation. “I’ll definitely be coming back,” she said. “It’s amazing.”

Miller, the 24-year-old freshman, emerged from the water looking proud after his first surfing experience and pleased to have begun the morning away from what he termed “the normal hustle and bustle of life.”