American Heartbreak: Comes Together to Form one Explosive Unit 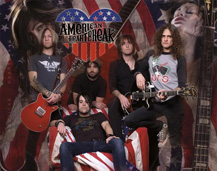 After nearly a decade of playing music together and putting out a handful of EPs and contributing to various tribute albums, the members of American Heartbreak have their hearts set on showing their “true colors” with their self-titled second full-length album.

“We really focused on this record and it’s pretty much a straight-up rock ‘n’ roll record,” says Rowe. “It’s more like what we were all into when we started out, like ‘70s and early ‘80s stuff.”

By toning down the Rancid vibe of its more recent releases, he says the band just wanted to “do a record of what we’re really about.”

Rowe, also known for his work in the ‘80s metal band Jetboy, grows excited upon learning that the band’s Damned Nation is one of my favorite CDs.

“Oh really?” he remarks. “Oh wow, it’s always a trip when it comes and hits me like that. We go over to Europe sometimes about four times a year and some places, it just blows my mind when people pull that out. For us and for me, that was the record I always said could have been what Skid Row had basically.”

But it didn’t turn out that way. Rowe credits the corporate world and major labels as the reason the band fell apart.

“Even though we technically sold over 300,000 records … in those days if you didn’t hit a million, you [were] done,” Rowe says. “The whole Seattle grunge scene is what took over.”

But as the bubble burst on ‘80s rock, and bands like Soundgarden, Pearl Jam, Nirvana and Alice in Chains took over, Rowe kept playing music.

“I was doing more of a metal type band when bands like Pantera were hot and stuff like that was kind of the new thing,” he says.

And for some time, Rowe, Jetboy’s singer and former Exodus bassist Mike Butler dabbled in some music together.

“When that fizzled out, we just decided to start a rock band and do what we loved to play,” Rowe explains. “[We just wanted to] start a band of what we were fans of basically.”

Having Butler in American Heartbreak creates an interesting combination of past musical experiences.

“Yeah, he was the last bass player to play on the last major label release they did.” Rowe says. “We were lucky enough to tour with big bands like Black Sabbath and Body Count.”

Though Rowe has moved on since his Jetboy days, referring back to Damned Nation he says, “It’s almost like all that experience I had in doing that kind of a record is really what I kind of focused on and took with this new American Heartbreak record and kinda’ threw all the ingredients into the pot. It’s a combination of old American Heartbreak and also some of my stuff with Jetboy as well.”

American Heartbreak’s sophomore album will be available April 18. The band will perform April 29 at the Whisky, in West Hollywood. For more information, visit www.churchofrockandroll.net.