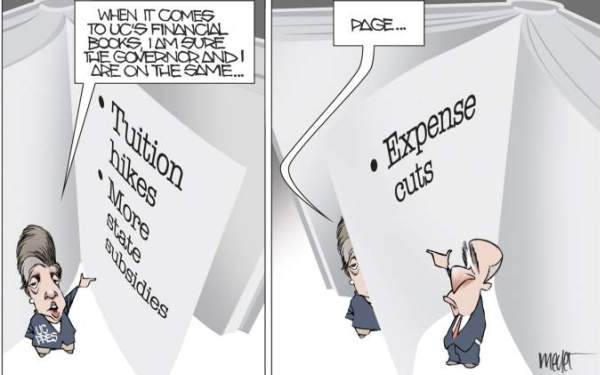 Ask the leaders of California’s four-year universities, and they’ll tell you they don’t have the financial resources to fulfill the needs of their students and would-be students.

A deep recession and steep cuts in state funding have taken a toll on the University of California and California State University systems — as well as on their students and the students’ families.

Beyond the shared fiscal pain, however, the leaders of these nationally renowned public institutions are taking sharply different approaches to Gov. Jerry Brown’s offer of a $119 million increase in state funding for each university.

UC President Janet Napolitano secured approval from the regents for a 27.5 percent tuition increase, to be imposed in 5 percent increments over five years unless the university received a comparable increase in funding — about $100 million a year — from the state treasury. Napolitano put the increase on hold pending budget negotiations with Gov. Jerry Brown.

It wouldn’t be uncharitable to describe that approach as akin to extortion.

CSU Chancellor Timothy P. White can match Napolitano anecdote for anecdote, pie chart for pie chart on the detrimental impacts of past budget cuts, the rising tide of undergraduate applications and the inability of his faculty and staff to reconcile the conflicting demands.

At their meeting last month in Long Beach, the CSU Board of Trustees instead received a presentation about measures that could save money without adversely affecting students, such as sharing new technology and using cloud-based resources that are available to students at the university’s 23 far-flung campuses, from Arcata to Chico to San Luis Obispo to San Diego.

CSU also is collaborating with K-12 school districts, community college districts and, yes, UC on purchases as a way to get a bigger bang for their buck, and it is exploring energy-efficiency programs.

White still argues, with some justification, that CSU is underfunded, and officials say Brown’s budget proposal would only cover 3,500 new undergraduates, almost 9,000 fewer than the university’s budget request would have accommodated. CSU also has about $1.7 billion in deferred maintenance that can’t be ignored indefinitely.

“You cannot efficiency your way to academic excellence,” White said, according to news accounts of the trustees’ meeting. “I’m worried as chancellor at how vulnerable CSU is and, as a result, how vulnerable California is.”

He’s right. By 2025, two of every five jobs in the state will require at least a bachelor’s degree, and 60 percent will require some type of higher education. California’s universities need to step up their game to meet that demand.

Over the past 10 years, tuition has doubled at CSU campuses and nearly doubled at UC. State support, meanwhile, has declined precipitously. On a per-student, basis, Napolitano says, public universities get $10,000 less today than they did in 1991.

It’s also true that administrative spending has risen much faster than classroom spending, with many UC administrator receiving salaries well in excess of $200,000 a year. It would be much easier to support more state funding if CSU continued its effort to find efficiencies — and UC committed itself to reducing high overhead costs and redirecting more revenue to educating California’s next generation.