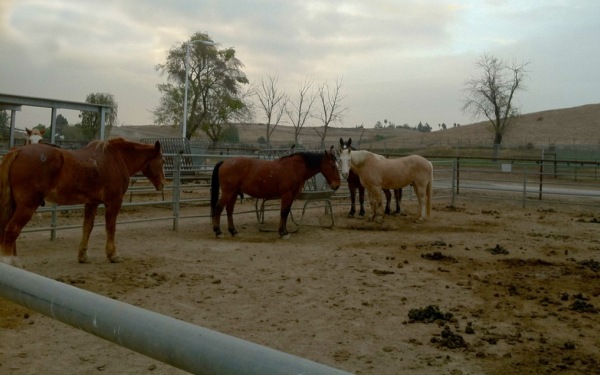 A day after Gov. Jerry Brown ordered drought-stricken cities to restrict water use for the first time in state history, Pierce College announced a plan to reflower its historic farm.

But if new rows of avocado, citrus and grapes should ever reach fruition next to fresh fields of hay and beefed up livestock, a new Pierce College Farm would be greener than green, officials say, saving every drop of irrigation water.

“We are going to maximize conservation, because we are concerned about water use,” said Leland “Dr. Cows” Shapiro, chairman of the Agriculture Department, which he has served since 1968. “We plan to use the most advanced conservation systems.

“We’re going green: I want to show the students and the public that we can still produce food while going green.”

The school’s preliminary outline for a regenerated college farm was announced last week after months of controversy over the eviction of the privately run Pierce College Farm Center. The proprietor has until April 15 to vacate the farm stand at Victory Boulevard and DeSoto Avenue.

It also followed Brown’s High Sierra decree on Wednesday that the state’s 481 cities cut water use by 25 percent as California muddles through its fourth year of extreme drought. Mountain snowpack, which supplies a third of the state’s surface water, was 6 percent of normal, the lowest on record. Snow levels that supply the Los Angeles Aqueduct were only 2 percent.

But the order didn’t affect California farmers, now suffering state and federal water cutbacks, who use the bulk of available surface water.

What wasn’t clear was how it would affect a potentially larger farm at Pierce College, which is hooked up to the city’s water system. Or precisely how the mandatory 25-percent reduction would affect Los Angeles — already a state leader in urban water conservation.

L.A. quenches its thirst with the same amount of water it used 40 years ago, despite having a million more residents.

The city has further cut water use by 22 percent since ardent water conservation measures were launched six years ago, spurred by aggressive turf rebates that encouraged businesses and homeowners to swap 14 million square feet of grass for low-water plants. The water savings: 480 million gallons, enough water to supply nearly 3,000 households for a year.

“What we really need to do in Southern California is change our thinking,” said state Sen. Bob Hertzberg, D-Van Nuys, who represents an eastern swath of the San Fernando Valley. “Capture water: There shouldn’t be a drop of water that goes into the L.A. River.

“If we take less water, there’s less tension from the farmers.”

The bad news after the warmest winter and March on record: After some expected rain next week, there may be few rain drops until the coming fall. The good news, forecasters say, is that shifting temperatures in the Pacific Ocean could usher in an El Nino weather pattern with potential rain across the Golden State.

“For the last few years, lots of talk about El Nino, but it really turned out to be El Wimpo,” said Bill Patzert, climatologist for the Jet Propulsion Laboratory in La Canada Flintridge. “But with the change … there is the potential for a strong El Nino next winter.

“It may be the El Hombre that we’ve all been waiting for.”

Since Mayor Eric Garcetti announced an executive directive last fall to curtail further water use and boost rebates for residential turf removal to $3.75 per square foot, the city has already replaced nearly three times as much grass as last year.

The water savings since the mayoral order: 7 gallons per person per day, helped by more than 8,000 complaints from residents about water waste.

By this summer, Angelenos are expected to cut water use by another 10 percent since last year by sipping about 117 gallons per person per day, LADWP officials say. The city also expects to have ripped out 22 million square feet of grass — or roughly 40 percent of Brown’s goal of stripping 50 million square feet of lawns across the entire state.

With the city having vowed last year to cut its spigot use by 20 percent by 2017, it’s on track to meet the governor’s goal, Los Angeles Department of Water and Power officials say, with a 50 percent drop in imported water use planned by 2024.

To get there, Los Angeles hopes to expand its rate structure to encourage more conservation by hiking its price tiers from two to four, making high-water use more expensive. The rate changes would need approval by the City Council.

It also expects to expand the use of recycled water to 85-percent of its golf courses.

“For us, (the governor’s order) really underscores what we’ve been already doing — that our water pricing and turf removal is in line,” said Marty Adams, senior assistant general manager for the DWP. “The public is accepting you don’t have to have grass. The tide is turning.

“We believe that the track the mayor is on will get us on the path (that the) governor wants.”

For Pierce College and its potentially larger farm, one measure would be to increase the use of recycled wastewater, Adams said. The Las Virgenes Municipal Water District near Calabasas has proposed building a “purple pipeline” from its treatment plant to the San Fernando Valley to divert harmful wastewater flowing into Malibu Creek.

Such water, if the utilities can reach an agreement, could supply both the farm and west Valley golf courses. “We are looking at that actively with Las Virgenes,” said Adams, director of water operations, “to run a pipe into Los Angeles, and possibly Pierce College and the Woodland Hills Country Club.”

It was two weeks ago that the Foundation for Pierce College, concerned about a possible threat to 226 acres of campus farmland, called for an agricultural conservation easement to protect it for future generations. Its resolution was sent for consideration by community college district trustees.

Then last week Pierce College posted a draft of its Farm Plan Outline, saying it would solicit input from the college and outside communities.

The five-point plan calls for ramping up the school’s horticulture, pre-veterinarian, vet tech and equine programs, with a potential partnership with Cal Poly Pomona, which offers urban ag education. Pierce ag students could then transfer to Pomona.

Potential changes could mean new greenhouses and hydroponics for Old McDonald and a curriculum in sustainable urban agriculture, Shapiro said. It could also mean 10 acres of avocados, an acre of citrus and 5 acres of wine grape vineyards soaring over the campus hill, with you-pick fruit picking for the general public. It could also mean slightly increasing its herds of cows and sheep, while growing alfalfa and hay in which to feed them.

An Agricultural Education Center could bring in 4-H and Future Farmers of America kids, with community gardens to allow residents to grab a hoe.

The current farm stand could also be reopened for farmers markets and for the sale of Pierce-grown produce.