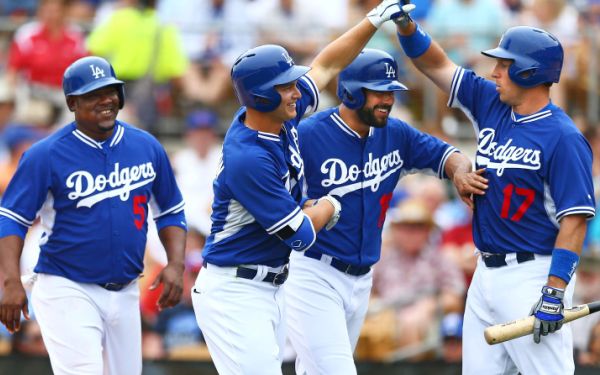 66; Yasiel Puig; RF; R/R; 24; Says he wants to be the LeBron James or Kobe Bryant of baseball; they both led their teams to championships.

9; Yasmani Grandal; C; S/R; 26; Acquired in trade for Matt Kemp, he is expected to be the primary catcher for several seasons.

31; Joc Pederson; CF; L/L; 22; Rookie is upgrade defensively, and he had a big spring as a hitter. Made Kemp expendable.

22; Clayton Kershaw; L/L; 27; Reigning NL MVP and Cy Young Award winner has dominated everyone except the Cardinals in the playoffs.

35; Brett Anderson; L/L; 27; Had strong spring, but can he stay healthy? Has pitched fewer than 100 innings in each of his last four seasons.

56; J.P. Howell; L/L; 31; At times last season he was only left-hander in bullpen. Can Mattingly avoid running him into the ground again?

41; Chris Hatcher; R/R; 30; Converted catcher was considered potential fill-in as closer while Kenley Jansen is on DL, but hasn't produced.

75; Paco Rodriguez; L/L; 23; Looked as if he regained his 2013 form in spectacular Cactus League season.

12; Juan Nicasio; R/R; 28; Career starter made transition to bullpen with Colorado last season. Here, would be a long reliever.

16; Andre Ethier; OF; L/L; 32; Former All-Star wants to be traded, but his declining production has made him difficult to move.

14; Enrique Hernandez; IF/OF; R/R; 23; A capable hitter who can play multiple positions in the infield and outfield.