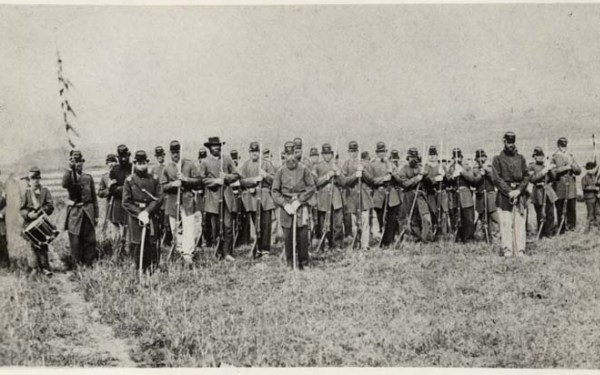 WILMINGTON - Susan Ogle can wax historic for hours about the Civil War, and as director of the Drum Barracks Civil War Museum, she is in her element.

Ogle beams as she guides guests through the former officers’ barracks during a recent tour of the museum, nestled in a residential neighborhood near the port of Los Angeles, telling story after story about the war and the role the Drum Barracks played in it.

“This was a supply depot, and from here we sent out supplies to about 126 forts and camps throughout the West,” Ogle said.

This month marks the 150-year anniversary of the end of the Civil War and the assassination of President Abraham Lincoln that followed. Though fought mainly in the Union and Confederate territories of the eastern and southern states, the imprint of the Civil War – which cost more than 600,000 lives over its four years – stretched all the way to California, where the war played a bigger role than many would expect.

And in Southern California, the memory of the war that almost ruined the nation is alive and well, from L.A.’s South Bay and San Gabriel Valley to the Inland Empire.

Civil War re-enactments dot the region. So do museums. And so do cemetries, where hundreds of veterans of the war are buried.

Money and migration played a role in tying the west to the east.

“About one fourth of the Union’s cost for the war was paid by California’s gold,” Ogle said. ”So California had a big impact politically, socially and economically.”

Following the war, throngs of battle-weary soldiers came to California to distance themselves from the territories they fought in and begin new lives, said William Deverell, a history professor at the University of Southern California.

“It’s important to remember that the rise of California in national consciousness dates to the immediate post-war period, when the nation and its legions of wounded sought convalescence or healing, or just plain distance, from the bloodied sites of war and national tragedy,” Deverell said. “And the cemeteries almost always recognize the Civil War service of those buried.”

More than two dozen soldiers who fought in the Civil War are buried at the Wilmington Cemetery, Ogle said, adding that the Civil War-era Gatling Gun displayed at the Drum Barracks was originally at the cemetery before it was dislodged from its concrete base and stolen in 1962. It re-surfaced seven years later, dismantled and in pieces, at a San Pedro dump, and was restored and turned over to the museum for preservation and display.

Hundreds of Civil War veterans who fought on both sides of the war are also buried at Hillside Memorial park in Redlands, Mountain View Cemetery in Altadena and Hollywood Forever Cemetery, among others.

At Savannah Memorial Park in Rosemead, 11 Civil War veterans who fought for the Union and nine who fought for the Confederacy are buried at the cemetery, along with hundreds of the San Gabriel Valley’s settling pioneers, said Beverly Mabb-Morten, vice president of El Monte Cemetery Association, which oversees the historic cemetery.

“Savannah is a really unique, niche cemetery,” Mabb-Morten said. “We’re the collective memories of the San Gabriel Valley. I think it gives people a sense of orientation, of who we are.”

April also marks the sesquicentennial of President Abraham Lincoln’s assassination. He was shot on April 14, 1865 - five days after General Robert E. Lee surrendered to General Ulysses S. Grant in Appomattox, Va. He died the next morning.

In observance, the Lincoln Memorial Shrine in Redlands will have on display throughout April a replica casket of the one Lincoln was entombed in. Aside the casket will be a wreath, encased in a shadow box frame, that was placed atop Lincoln’s real casket in 1865.

“You will experience it as if Lincoln were lying in state,” said Nathan Gonzales, curator of the Lincoln Memorial Shrine, where one can find official letters Lincoln wrote, Civil War uniforms, weapons and musical instruments, and even a lock of Lincoln’s hair, cut from his head by the surgeon tending to him after he was shot.

The framed wreath that will be on display next to the replica casket has been on display for years at the shrine, established in 1932 and the only museum west of the Mississippi dedicated to the curation and preservation of authentic Lincoln and Civil War memorabilia.

At the Drum Barracks in Wilmington, aka Camp Drum (named after Lt. Col. Richard Coulter Drum), one can experience the actual environs and customs of officers during the Civil War. In the junior officers’ quarters are replica bunk beds and a table with plates of crumbly hardtack, a hard biscuit that was a dietary staple of soldiers. Also atop the table are a handcrafted checkerboard and lead dice made from expended bullets.

The Drum Barracks was first a warren of tents before construction began on the 22 buildings in 1862. Initially built for the purpose of housing soldiers to fight Indians and protect the interest of westward expansion, the facility later became a training and supply base for military operations in the Southwest.

The museum houses a plethora of other Civil War memorabilia that is the envy of collectors and historians. When the building was undergoing renovation in 1976, workers found stashed in boxes underneath the building the original fireplace andirons for holding logs, topped with cast iron eagles.

One story Ogle loves telling the most is the one about the “Great Camel Experiment,” when U.S. Secretary of War Jefferson Davis, in the mid 1850s, launched an experiment, courtesy a $30,000 allocation from the government, to have soldiers begin using camels as pack animals in the arid, desert regions of the Southwest. They could carry twice the load of mules, move at twice the speed, and go without water for long periods.

“There were 36 of them here at the Drum Barracks,” Ogle said Thursday of the camels. She stood before a glass display case housing specially designed resin figurines of soldier-mounted camels, draped in cloth emblazoned with the words “U.S. Camel Corps.”

Framed on a wall at the Drum Barracks is the only known photograph of a camel hitched outside the Camp Drum depot on the waterfront, about a mile south of the barracks.

”I love these camels. I just love them,” Ogle said.

But the U.S. Camel Corps, though proving successful and gaining momentum, was short lived, lasting from 1856 to the outbreak of the Civil War in 1861, when funding was cut and the camels proved to be somewhat of a culture shock for soldiers, who were used to mules and horses and couldn’t adapt to the large and often ornery mammals, which also scared the mules and horses and sent them either running off or whinnying in fright.

“With a mule, you can whack them a couple of times to get their attention. You do that to a camel, and the camel will bite you,” Ogle said.

Veronica Mendoza brought her children, Matthew, 8, and Marissa, 5, to the Drum Barracks Thursday afternoon for a guided tour. She said was unaware of the Civil War’s sesquicentennial, but she said that made the experience only that much more special.

“I think we just take for granted the things that are right here in our own backyard, and I thought this was a great time to really take advantage of the history that’s right here, and expose the kids to it,” said Mendoza, 34, of Carson. “I think it really gives them a realistic idea of the world versus what they see on TV or hear at school from friends.”