Coachella festival takes on the feel of a casual fashion week 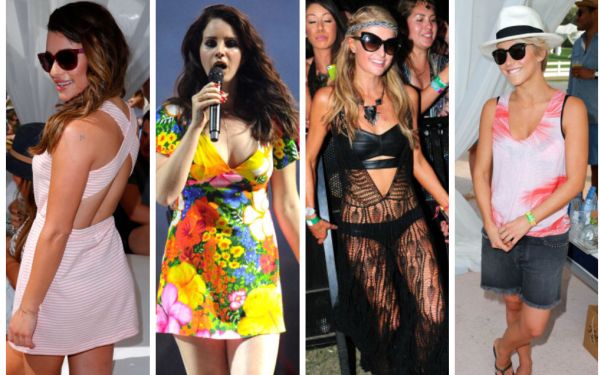 Asking if someone is going to Coachella is not a simple question.

Do you mean the festival, the parties or the runway shows? Are they looking forward to seeing rocker Jack White or fashion designer Nanette Lepore?

The Coachella Valley Music and Arts Festival, which brings about 180,0000 people to Indio each year, has become an official stop on the fashion industry calendar, with the first ever Pandora Jewelry experience of four full runway shows planned at the Parker Palm Springs, a Council of Fashion Designers of America-hosted brunch and an H&M pop-up shop, the first retail experience of its kind on the festival grounds.

The festival takes place this year Friday-April 12 and April 17-19, and it has become a way for the fashion industry to reach a new set of consumers — those willing to pay for a $799 VIP wristband and sway for hours in the desert heat to beats by their favorite artists.

"Festival-goers really embody the Plenty spirit, modern, bohemian with a casual, laid-back sexiness," said Tracy Reese, who will be showing her Plenty collection on the runway, along with Lepore, Siwy Denim and Whit (by Whitney Pozgay). "I love the idea of connecting directly with consumers in a chill environment that really speaks to the clothing."

For Lepore, the festival has become a season of its own, just like spring-summer, fall-winter or resort collections. And it's an opportunity to show fashion directly to consumers, unlike the heralded fashion weeks in cities such as New York and Paris, where the audiences are made up of store buyers, editors and celebrities. "When [designers] talk about how they lay their line out, festival is always included now," said Lepore.

Pozgay, who chose to forgo other shows to present her spring collection only at Coachella, notes a spike in sales of certain crop tops and other festival-friendly attire before festival time each year.

"It's exciting for us to have a consumer-facing show, so you can actually get the clothes now," said Pozgay, who will be showing a collection that's already in stores.

With an influx of the fashion world's top designers heading to the desert, the CFDA is making its first official appearance this year.

"People now look to music festivals like Coachella for fashion style and trends much in the same way they do for discovering what's hot in music," said Steven Kolb, chief executive of the CFDA. "With the growing spotlight on who is going and what's happening at Coachella, many of our designers incorporate festival-inspired looks into their resort collections. There's an entire marketing and PR initiative that ties back to music festival season."

The CFDA will host a fashion-forward brunch with online style network Pop Sugar and fashion designer Mara Hoffman as part of a three-day takeover of the Viceroy Hotel that also includes a Shopstyle Cabana Club, where supermodel Alessandra Ambrosio will host a cocktail party to launch her new Ale by Alessandra for BaubleBar jewelry collection.

"It's wild how much Coachella fashion has grown over the years," said Hoffman, who is noted for her swimwear. "To me, Coachella style is defined by pieces that are cool, casual and comfy. The vibe is totally on-brand for us."

The CFDA will also be celebrating the launch of its Must Have limited-edition box of swag containing items such as cosmetics and jewelry, curated by CFDA members, with 50% of the profits going to the CFDA foundation.

And in another Coachella fashion first, longtime festival sponsor H&M is hosting a pop-up in a tent where festivalgoers can shop the H&M Loves Coachella Collection and participate in a multi-sensory installation. Visitors will be able to interact with the collection's colors, textures and fabrics via virtual realty and take so-much-better-than-your-friends' selfies in a 360-degree mirrored selfie station.

"Coachella is known for fashion as much as their music, so it is a perfect fit for our brand," said MaryBeth Schmitt, continental communications director for H&M. "It has also always been a great source of inspiration for us design-wise and is a venue in which we are able to connect with our customer in a unique way." Last year, the brand used its annual Coachella party to announce its designer collaboration with Alexander Wang.

This year's new fashion parties, shows and brunches join a growing number of events hosted by fashion brands at Coachella over the last few years. This year, Harper's Bazaar returns to the desert with a ShopBazaar pop-up at the Soho Desert House; Paper and PacSun are hosting the sixth-annual Neon Carnival by Brent Bolthouse; Cynthia Vincent returns for a brunch with blogger Jenny Bernheim; Sephora Collection will have a DIY beauty bar on the festival grounds; and MAC Cosmetics is hosting a poolside party with Mia Moretti at the Ingleside Inn. Coach has planned a party co-hosted with Echosmith at Soho Desert House. People StyleWatch and Revolve have scheduled an event with Nikki Reed to unveil a festival capsule collection. Refinery29 and A-OK Collective are hosting a two-day pool party called Paradiso. Rachel Zoe, the Zoe Report and Dolce Vita are hosting a pool party, and the Retreat at Coachella will offer a three-day sanctuary at the Sparrows Lodge that includes beauty, spa treatments and more.

Coachella is not exactly New York Fashion Week, but with the runway shows, fashion-skewed parties and pop-up shops, it's well on its way. "I don't know if Coachella will ever turn into a runway destination, but what it's all about is finding new ways to present clothing to people in a way that's fresh," said Lepore.