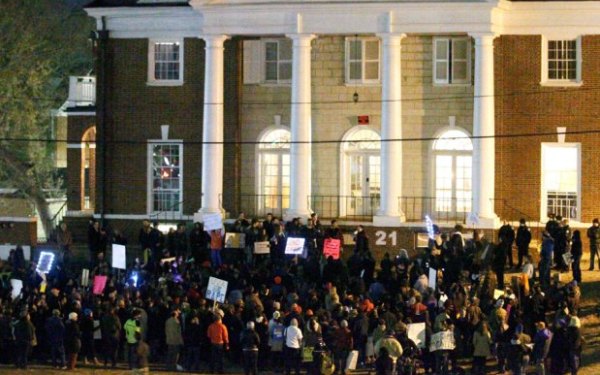 Protesters outside the Phi Kappa Psi fraternity building at University of Virginia on Nov. 22, 2014.
(Credit: pbs.org)

Rolling Stone fell under continued criticism Monday after the authors of a damning outside investigation refused to blame the magazine’s primary source for a widely discredited rape story, and a University of Virginia fraternity announced plans to pursue legal action.

Virginia’s governor even joined in the criticism, calling Rolling Stone’s story an “abject failure of accountability in journalism.”

The fallout comes a day after the venerable alternative magazine retracted and apologized for its November expose about an alleged gang rape at a University of Virginia fraternity after an outside review by the Columbia Journalism School found deep flaws in the story.

“The report by Columbia University’s School of Journalism demonstrates the reckless nature in which Rolling Stone researched and failed to verify facts in its article that erroneously accused Phi Kappa Psi of crimes its members did not commit,” Stephen Scipione, president of the Virginia Alpha Chapter of Phi Kappa Psi, said in a statement provided to the Los Angeles Times.

The fraternity said it planned to pursue “all available legal action” against the magazine.

“This type of reporting serves as a sad example of a serious decline of journalistic standards,” Scipione said.

Neither Police in Charlottesville nor the Columbia University report found evidence that a rape happened at the Phi Kappa Psi fraternity as originally reported in the Rolling Stone story.

“The abject failure of accountability in journalism that led to Rolling Stone’s ‘A Rape on Campus’ article has done untold damage to the University of Virginia and our Commonwealth as a whole,” Virginia Gov. Terry McAuliffe said in a Monday statement. “More importantly, this false account has been an unnecessary and dangerous distraction from real efforts to combat sexual violence on our college campuses.”

On Sunday, the story was removed from Rolling Stone’s website and replaced with a 12,644-word independent report from Columbia’s esteemed journalism program found serious lapses in basic journalistic procedure by the magazine.

At a livestreamed news conference in New York on Monday, the authors of the Columbia Journalism School report placed the blame on the magazine’s reporting and editorial processes, not on the student, “Jackie,” whose account of the rape failed to hold up to basic scrutiny after Rolling Stone published its story.

“This failure was not the subject or source’s fault as a matter of journalism,” Columbia University Journalism School dean Steve Coll told reporters.

“It was a product of failed methodology. … We disagree with any suggestion that this was Jackie’s fault,” he said.

Sheila Coronel, a dean of academic affairs at Columbia University, said she and the other authors of the independent report decided not to fully identify the student known as Jackie even though her allegations of an alleged gang rape at a fraternity house have been widely questioned.

“There was no reason for us to make known her true identity,” Coronel said.

Although Rolling Stone’s systemic breakdowns in verification and attribution mark one of the ugliest blemishes in the magazine’s sometimes storied history, Rolling Stone’s publisher had no plans to fire any of the editors or the writer involved with the story, a spokeswoman confirmed to the Los Angeles Times on Sunday.

The Los Angeles Times requested interviews with Rolling Stone’s publisher, Jann S. Wenner, and its managing editor, Will Dana, but through a spokeswoman, both declined to be interviewed.

The Columbia report’s authors found no instances of fabrication or lying on the part of Rolling Stone, which requested and cooperated with the Columbia Journalism School’s inquiry.

Rather than blame a single person for the story’s failure — such as the author, Sabrina Rubin Erdely — the Columbia authors instead detailed a systemic journalistic breakdown at Rolling Stone.

“The magazine set aside or rationalized as unnecessary essential practices of reporting that, if pursued, would likely have led the magazine’s editors to reconsider publishing Jackie’s narrative so prominently, if at all.”

Through a spokeswoman, Erdely declined an interview request Sunday evening, but she apologized in a statement after the Columbia report was published, calling the last few months “among the most painful of my life. Reading the Columbia account of the mistakes and misjudgments in my reporting was a brutal and humbling experience.”

She apologized “to Rolling Stone’s readers, to my Rolling Stone editors and colleagues, to the UVA community, and to any victims of sexual assault who may feel fearful as a result of my article.”