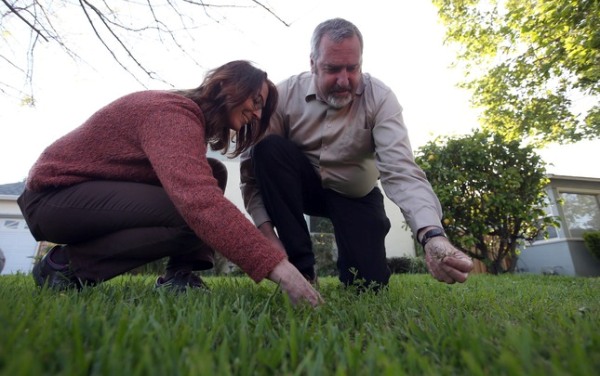 SAN LORENZO -- Catherine Kavasch knew she wanted to get rid of her lawn, she just wasn't sure what to grow in her yard instead.

But now she has four templates to guide her in what and where to plant, created by UC Berkeley landscape architecture students specifically for San Lorenzo yards. The four designs are the result of a partnership of the San Lorenzo Village Homes Association, StopWaste and the university.

"I'm excited," said Kavasch, whose plans to convert her yard into an herb garden are undergoing approval.

"The house came with the lawn; it's pretty common in San Lorenzo. It's not what we should be doing; watering lawns is one of the biggest waste of water there is. I'm trying to do my little part," said the homes association's former president.

Her actions are even more timely after Gov. Jerry Brown ordered mandatory water restrictions Wednesday as the state's drought worsens.

The UC Berkeley students compiled the four garden designs in a 134-page book containing color photographs, watercolor paintings and illustrations. The book has planting designs for sunny and shade lots, estimates of plant cost, expected water savings and detailed descriptions of the plants and their eventual size.

The four plans will be displayed April 25 at a landscape expo where StopWaste also will lead a "garden party" to convert a portion of the association office's yard into a California native garden. The association is holding an essay contest for San Lorenzo Village residents to win free installation of one of the four drought-tolerant yards.

"We have homeowners who want to convert their yards, and now we are giving them the tools," said Susan Kleebauer, homes association administrator.

The association requires residents to maintain their yards, but does not tell people what to grow, said board member Steven Kirk.

"We often get questions about what is an acceptable yard. A common belief is it has to be lawn, which is not true," he said.

When San Lorenzo Village homeowners learn they are allowed to convert their yards to be more drought-tolerant, they often ask what it will cost and how they are supposed to do it, he said.

The association did not have a good answer, Kirk said, so he asked UC Berkeley's landscape architecture department Chairwoman Louise Mozingo if there was any interest in students creating drought-tolerant garden plans for San Lorenzo yards.

StopWaste awarded a $7,000 grant to cover most of the cost of the class, and the homeowners association contributed $1,000.

"If even half of them stop watering their lawns, just think about the water savings," said instructor Dawn Kooyumjian, who taught the course.

The six graduate students and one undergraduate visited San Lorenzo, talking with people to get a sense of the community, she said.

The students created seven designs, and refined four after surveying residents at community meetings: a cottage garden, an herb garden, a California native garden, and a lush and dry garden that includes succulents.

San Lorenzo Village was built as a planned community in the 1940s and '50s, with most of its flat lots about the same size. That made it easier to create the four prototype gardens, Kooyumjian said.

The four designs conform to the homes association's covenants, conditions and restrictions, which are rules all association members must follow. Village residents need to have the plans approved by the association before starting work.

"We ask that you contact us before you start your project," she said.

Because of watering restrictions, the warm season is not a good time to replant an entire yard, Figueroa said.

"We strongly recommend you take it slow. You can sheet mulch now, but wait to do most of your planting in the fall," she said.

Sheet mulching is a way to get rid of a lawn by covering it with a layer of cardboard or newspapers and then a layer of compost, topped off with mulch.

StopWaste promotes sheet mulching to remove lawns instead of digging out the turf, which goes into the landfill, said Kelly Schoonmaker, a program manager with the agency.

People who sign up to help at the garden party will get discount coupons for lawn conversion materials.

UC Berkeley printed a limited number of the book, called "Gardens for San Lorenzo." Copies can be checked out at the San Lorenzo Library starting Monday,? and association members can borrow the book at its office.

East Bay MUD and StopWaste are considering reprinting it for wider distribution. Though the templates were designed for San Lorenzo, they could be adapted throughout the East Bay flatlands.

Schoonmaker said she hopes members of other homeowner associations attend the expo.

"The students worked within San Lorenzo's covenants, conditions and restrictions. I think it would be great for other homeowners associations to see what's possible without a lawn," she said.