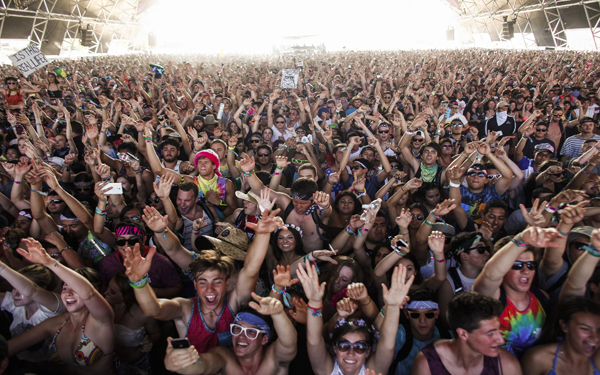 Like Muslims to Mecca, Catholics to the Vatican or mullet-headed hillbillies to NASCAR, the annual desert pilgrimage for music lovers is upon us. The Coachella Valley Music and Arts Festival has become the music festival, nestled close to the industry hotbed of L.A. but also attracting flocks of fans from across the globe. The three-day, two-weekend festival has the ability to make or break an artist; it can resurrect West Coast rap royalty in the form of a hologram; and it can supply happiness and a hangover that’ll last well beyond the end of the weekend. Whether you like it or not—whether you despise the state of modern music, electro “drops” and all—Coachella has become today’s Woodstock. So when tickets went on sale for 2015’s festival, they sold out faster than you could say. “Kendall Jenner’s nose ring.” And just as quick as the tickets were snatched up, the lineup was knocked and praised by fans and critics alike. So grab your feathered earrings, your sunglasses and your mind-altering substances because we’re going to take you through this year’s musical guests.

Because life is short, let’s make like an impatient child on Ritalin and start straight at the top with the headliners. First off we got Australia’s legendary pundits of frat-boy ballads, AC/DC. Though this may seem slightly askew from Coachella’s generally adolescent turnout, it was likely a move to add an element of widely accepted diversity, as they usually do. The band will be without longtime drummer, Phil Rudd who in late 2014 was arrested in New Zealand for drug possession and alleged murder-for-hire (yeah, you read that right). Along with Rudd’s absence, the band will be missing original member Malcolm Young, who has been stricken with dementia. Next up is Jack White. Though White is rock n’ roll’s current golden child—a sort of Eric Clapton with a blues-infused thundercloud over his head—and a recent recipient of a Grammy, little hype has emerged his coming performance. And closing out the two weekends this year is Drake. There is no surprise with this decision because everybody—your mother, your little sister, your dog—adores the teen drama actor turned rapper. Make sure to look into his eyes when he sings; those brown orbs are said to cure cancer.

Some of us go-getters out there went above and beyond our baseline duties and read past the bold-faced type at the top of the lineup poster. For those overachievers, a substantial catalogue of second tier artists pleasantly rewarded them. From alt-j to Alabama Shakes; from St. Vincent to The Weeknd; Florence and the Machine to Tame Impala; the list of secondary performers is very strong for 2015. On top of the previously mentioned artists in the prime of their careers, there are a few unexpected throwbacks in the mix. There’s the moody high schoolers favorite band, Belle and Sebastian (who just released their first album in five years), Interpol and rebel armed with an acoustic six-string, Ryan Adams.

Moving even further down the list into the attention-span no-mans-land, the artists keep getting better. As a general rule with festival lineups, the smaller the typeface, the less trendy the band. But this year’s bottom-billed attendees are a force worth reckoning, including Ghostface Killah, Mac Demarco, Action Bronson, Chet Faker, The Orwells and a startlingly low placement for Panda Bear. Noah Benjamin Lennox, aka Panda Bear, is also the founding member of Animal Collective, a headlining act in itself. And just this year, Lennox released a widely acclaimed album, Panda Bear Meets the Grim Reaper. Although they won’t be dominating the main stages at the most desirable time slots, the so-called second-class acts will likely be the ones to watch.

For Coachella veterans, the festival of today looks much different than it once was. Nowadays, about 80,000-85,000 people assemble in the desert compared to 25,000 in 1999, the first year of Coachella’s existence. The spike in numbers is a direct result of Goldenvoice, the company that promotes Coachella. In 2012, Goldenvoice bought land surrounding the grounds for a total of 280 acres. That year was also the first time that the festival was held on two consecutive weekends, allotting double opportunity for sweat and debauch in the desert. For music festival diehards, this change has been a royal buzzkill, attracting more and more people and less niche-friendly bands. Instead, organizers book the hottest, most mainstream artists to attract the most widespread crowd possible. They’ve substituted originality and quality for a bigger paycheck or, in other words, they’ve sold out, man.

Jimmy Kimmel’s interviews, trolling attendees of 2013’s festival into saying they like bands that don’t exist, shows a sad truth. Liking little-known, niche artists is deemed “cool” yet the big names are all we really care about.

Nonetheless, dehydrating yourself in the desert while pony-tailed men high on psychedelics gyrate is still a damn good time, a rite of passage for the modern youth. And despite a deteriorating display of headliners, there is still an abundance of worthy bands to be heard and surely some to discover. So belt out the lyrics to “Highway to Hell.” Admire the wonder of Jack White’s pale skin and his face-melting guitar solos. Bump and grind as Canada’s number one export sweetly makes love to your ears. But check out the smaller acts, too. For one day, you might be a grumpy old thirtysomething with a steady job and a mortgage, and you’ll reminisce about the good ‘ol days when you saw “so-and-so before they sold out and became famous.”