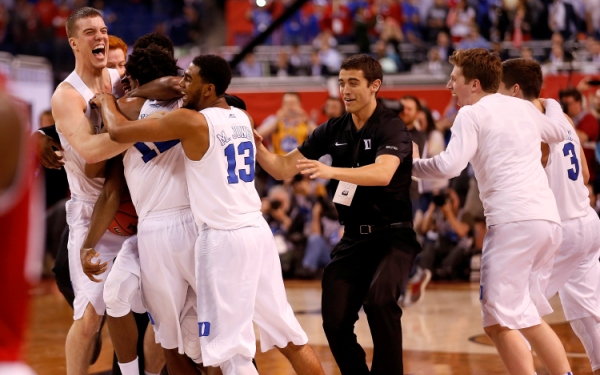 Jones had just taken America’s breath away with a clutch comeback performance that gave Duke a 68-63 victory over Wisconsin in the NCAA championship game, and now he was gasping for air under Okafor.

Okafor comes from Chicago and Jones from Minnesota, but, through modern technology and the support of family, the giant center and the point guard kept in touch and ultimately agreed to align themselves in college. They agreed to travel together to Tobacco Road where they paved the way for coach Mike Krzyzewski’s fifth national title. Jones scored 23 points — 19 in a second half nobody in Durham, N.C., will soon forget.

Duke’s dynamic freshman duo, along with classmate Grayson Allen, clearly didn’t care about the sweet Wisconsin narrative about seniors. The Blue Devils arrived having won five games by an average of 17.6 points but never flinched when the Badgers looked poised to pull off their first title in 74 years.

Not even Okafor’s foul trouble, which limited the big man to 22 minutes, was going to stop Duke on this night. The longer Okafor sat in the second half, the more he stewed. So when Okafor returned for crunch time, he imposed his will in a battle with Wisconsin star Frank Kaminsky he had been losing.

But with 3 minutes, 14 seconds left, Okafor spun and drew a foul on Kaminsky to make it 61-58. Then he blocked Kaminsky’s shot at the other end before scoring again on a putback with 2:10 left.

Until then, Kaminsky’s savvy had countered Okafor’s strength.

When Kaminsky unleashed a torrent of emotion after scoring a layup with 4:47 left in the first half, it wasn’t because the ball went in. Or because the basket tied the game at 23. Or because Kaminsky’s move was all that special. Kaminsky reacted that way because the whistle signaled the second foul on Okafor and he knew what that meant.

Okafor sat out the rest of the first half and Wisconsin, shaky early, rediscovered its poise with Duke’s big man on the bench. With confidence came composure and with composure came the Badgers team that had embodied all that’s good about college basketball in the tournament.

With Okafor watching the final 4:47 of the half, Duke never countered Wisconsin’s 7-0 run that got the Badgers back in it. A similar surge in the second half came after Kaminsky drew Okafor’s fourth foul with 9:18 left.

Chicagoans savored the matchup because the game to determine a national champion carried a distinct local flavor. Kaminsky and Okafor share a connection to Chicago even if their ascent to the top of college basketball took dramatically different paths.

Just before Okafor’s freshman year in high school at Young, he already had received a scholarship offer from DePaul. Tracy Webster, the Blue Demons’ interim coach at the time, extended it with hopes of reviving a program still in need of revival. Okafor became known as a basketball prodigy shortly after moving to suburban Rosemont from Oklahoma to live with his father, Chucky, after his mother died when the boy was 9. Coaches everywhere heard of the 14-year-old in size-16s.

Okafor always seemed destined to stand on his sport’s biggest stage; Monday it was to decide an NCAA title and in June it likely will be as the No. 1 pick in the NBA draft. Everything happened naturally.

Kaminsky, on the other hand, never would have guessed all that lay ahead for him at Wisconsin. Just before Kaminsky’s freshman year at Benet Academy in Lisle, Ill., in contrast to Okafor at the same age, he began wondering whether he ever would outgrow his awkward phase. He was a shy, skinny 6-foot-3 perimeter player who liked to shoot 3s. Even after young Frank began to grow physically into his body, the biggest metamorphosis came after he failed to make the Illinois Wolves AAU team when he was 15.

When Frank broke into tears on the car ride home, his dad, a product of the South Side who believed it was more important to be his son’s parent than his friend, told him to quit crying or go play soccer. A competitive fire was lit. It didn’t go out until Monday night in a game in which Duke simply had too much firepower.