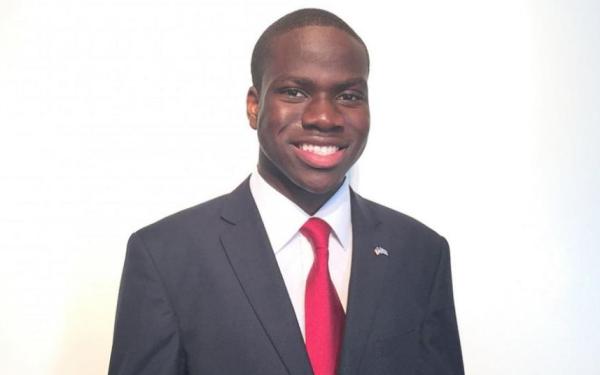 Elmont high school senior Harold Ekeh credited others Friday for his success in gaining admittance to all eight Ivy League schools and several other universities: his parents for moving to the United States from Nigeria when he was 8, and his teachers for challenging him.

Ekeh, 17, an Intel Science Talent Search semifinalist with a 100.51 grade-point average, has his sights set on becoming a neurosurgeon. He said he is leaning toward choosing Yale University to major in biochemistry or neurobiology, but he plans to visit other schools this month. He must make a decision by May 1.

"I was really shocked because they are such great, selective universities . . . but I am very grateful and humbled to receive such news," Ekeh said, standing in Elmont Memorial High School's science lab.

"I never really dreamed of getting accepted to all of the Ivies," he said. "I just wanted to get accepted to a great college that would allow me to attend medical school."

He and his family lived in Rosedale, Queens, before they moved to Elmont, where he started to attend Elmont Memorial in the ninth grade. He has been involved in Model United Nations and many school clubs and activities, and he scored 2270 out of 2400 on the SAT college admissions exam.

In addition, he is very active in his church, Winner's Throne of Grace Ministries in Rosedale, where he is president of the youth group and the youth choir director.

"He came into school and the first thing he said -- rather than saying 'Can you believe it?' -- he said, 'Thank you so much. I got into all eight Ivy League schools.' And that is Harold, and that is what he is about," said science teacher Michelle Flannory, who also is a research facilitator. "He is accomplishing great things, but he is also very humble."

This year, Ekeh was one of 90 semifinalists in the state in the 2015 Intel Science Talent Search, selected for his project titled "The role of PARP-1 in MeHg-induced dopaminergic dysfunction and mitochondrial DNA depletion," in the category of medicine and health. Ekeh said he was inspired to conduct research into a neurodegenerative disorder because one of his grandmothers was diagnosed with Alzheimer's disease.

Last year, Kwasi Enin of Shirley, then a senior at William Floyd High School, was accepted to all the Ivy League schools. He chose Yale, where he is majoring in molecular, cellular and developmental biology.

"It's a very big moment in anyone's life," Enin, 18, said Friday from the campus in New Haven, Connecticut. "It is a really nice time to look at your interests and your entire life, really, and . . . pick a school where you think you can build upon the dreams that you have already started to develop."

Ekeh hopes to serve as an inspiration to other students, including his four younger brothers, who range in age from 3 to 15. His father works in the New York Police Department's traffic division, and his mother works for a human services agency as a direct care counselor.

"Right from when he was little, he has been focused," said his mother, Roseline Ekeh.

His brother Precious, 9, hopes to follow in his big brother's footsteps.

"I am proud of him," Precious said. "And I notice how hard he works."