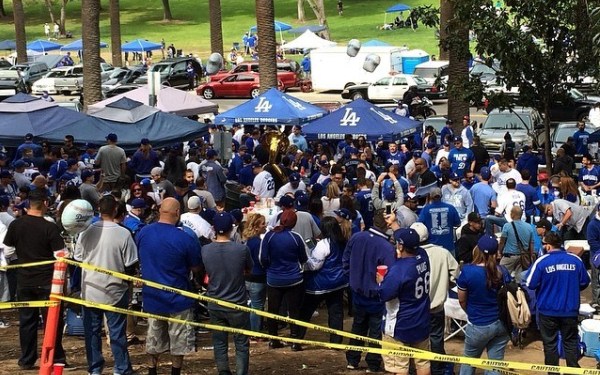 Rafael Gutierrez and his friends spared no expense for this year's Dodgers opening day.

They wanted to have a blast at Elysian Park before the game — hiring a party bus to chauffeur them down from Oxnard, a brass band and a taco guy.

But like many fans Monday, Gutierrez was surprised to find dozens of LAPD officers fanned across Stadium Way, prohibiting people from parking or stopping their cars to unload. On several surrounding streets, a two-hour parking limit made game-day festivities next to impossible.

The crackdown was part of a city-led effort to control the unruly tailgating that's long affected the area around Dodger Stadium.

Security has been a sensitive issue since Giants fan Bryan Stow was brutally beaten in a stadium parking lot in 2011. But this year Los Angeles took a get-tough approach — dispatching more than 200 officers — in response to numerous neighborhood complaints about fan behavior: heavy drinking, public urination and playing loud music.

Gutierrez agreed that there needs to be some police presence, but he and many Dodger lovers found Monday's actions heavy-handed.

"We couldn't even get off our bus all at once," he said. "We had to sneak out, one by one, and run into the park."

They left behind their tables, tents and chairs. Their taco maker gave up and turned back.

"I live for this day," Gutierrez, 24, said, pointing to the Dodger tattoo on his leg. "But this is so disappointing. We have no food and barely managed to grab a tiny cooler with some ice cream."

For those who bleed Dodger Blue, opening day is a long-held tradition.

Fans take off work and come out in droves dressed in blue and white — to barbecue, dance and drink alcohol (some discreetly, some not) until game time. Last year, nearly 50 Mexican brass bands spread across Elysian Park's lawn, playing their tubas and guitars.

This year, the LAPD estimated the crowd was about one-third the usual size (of up to 5,000). And the police presence seemed to keep things in check. Officers issued about 60 citations for drinking in public and made no arrests.

"The park was still open, and people enjoyed themselves," Sgt. Vincent Aguirre said. "But the message was clearly delivered that drinking will not be allowed."

Of course, many fans found ways around the restrictions.

Some parked their cars up to a mile away, then hauled grills and folding tables on their backs. Others had relatives drop them off or took cabs and Uber taxis to the park.

Some found they actually benefited from the restrictions.

Raul Cervantes said his Mexican tamborazo band received more calls for opening-day gigs this year than ever before.

Previously he'd been hired to play at Elysian Park, where everyone could hear. But now it was private parties in people's homes. On Monday he played outside a house in Echo Park. When he finished, he passed out his card, hoping to drum up more business.

"The tailgating ban may be ticking a few people off," he said. "But it looks like it has worked for me."

Still, some felt let down by the morning. They questioned whether it would be worth returning next year.

Cesar Perez and his wife have been tailgating at the home opener for more than a decade. They bring their son Andrew, who's now 11. On Monday, the family sat quietly by their picnic blanket, staring at the long row of police cars a few feet away. They said the day felt tense.

"You know who's most affected by this?" Perez said, pointing to his son. "He is. This was a special family tradition I wanted to pass along … but why would I want to bring him now? So he can sit here and be profiled by police?"

For residents surrounding the stadium, it was too soon to tell whether the additional enforcement would bring permanent change, but they were pleased to see a more subdued opening day.

"When I went out this morning, the police were everywhere," said Peter Lassen, who's lived roughly 300 feet from Dodger Stadium for about 30 years. "This is better than it has been. Thus far, I have not seen people [urinating] in the bushes."

Since moving into his home near the old Scott Avenue entrance, Lassen said he's seen all sorts of fan misbehavior. But as calm as Monday's opening was, he still reserved harsh words for the team's current ownership.

"They are not consulting with us," he said. "They are not asking our opinion — just telling us what they are going to do."

Moving forward, the city will try different approaches to find a balance between fans and residents, said Councilman Mitch O'Farrell, who represents the district.

That includes providing residents with permitted parking so they don't have to move their cars every two hours, as they did Monday.

Overall, O'Farrell said, he considered the day a success.

"This is what planning is all about," he said. "Preventing the negative activity that was so prevalent last year."

For many fans, however, the frustration went beyond tailgating woes. Loving their favorite team, they said, has never been this tough.

Stadium parking recently went up $5, to $20 a game, although discounts can be had by paying ahead of time. And across Los Angeles, fans can't watch the Dodgers on TV unless they subscribe to Time Warner Cable.

"Somebody better tell those businessmen to figure something out," said Luis Perez, 35, of El Monte. "Otherwise, a whole lot of us are going to be Angels fans pretty soon."