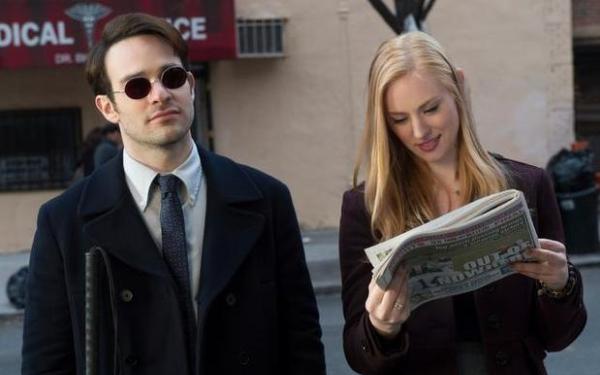 And the blind shall lead the way.

Continuing proof that the sun never sets on the Marvel Comics universe, “Marvel’s Daredevil” launches Friday on Netflix. The series, based on the blind lawyer who fights crime using his super senses, is the first of four series based on Marvel characters.

Also in the pipeline are “AKA Jessica Jones,” “Luke Cage” and “Iron Fist.” This would all wrap up in a mini-series featuring the heroes working together as an Avengers-style group known as the Defenders.

The task of playing the blind super hero falls to Charlie Cox, a British actor best known for his work on “Downton Abbey” and “Boardwalk Empire.”

“Daredevil” executive producer Steven S. DeKnight says Cox earned the role with how he internalized the emotions that the hero was feeling.

Once he landed the job, it was a matter of Cox putting on 20 pounds of muscle. Because Daredevil’s outer ego of Matt Murdock was blinded as a young boy during an accident involving a truck load of chemicals, his other sense are heightened to the degree he can smell the cheap cologne of a thug four stories below him.

But, like Batman, Daredevil doesn’t have super strength. Cox needed to bulk up to look like he could handle a street fight. He only had just over a month to great ready before filming started.

“I am just one of those people who can’t put on weight,” Cox says. “I even look at a gym and I lose weight.”

“Daredevil” threw multiple challenges at Cox. Along with the standard demands of acting, there were fight sequences, making Murdock’s blindness look real and contending with an American accent.

Cox spent weeks working with a consultant learning how to act blind.

“I spent a lot of time filming his eyes. He helped me with all of the other paraphernalia that comes along with being blind, such as having a cane. That was important because half of Matt’s life is continuing the illusion that he’s a real blind person,” Cox says.

Once he dons the Daredevil outfit, Cox has to contend with a black mask that covers his eyes and the top of his head. There were discussions about leaving holes in the mask so Cox could see and then filling them with computer generated images after the filming was done.

“We realized how time consuming and expensive that would be. Luckily, you can see through the material in the mask. So, we didn’t have to do anything,” DeKnight says.

A bigger challenge was creating the American accent. He admits to never having a good ear when it comes to accents, but he eventually found the right sound.

“There were times we had to redo takes because I would slip on a word here or there. Sometimes that was a little frustrating,” Cox says. “But, having said that, the great thing about an accent is that it’s like an extra piece of costume. It’s one extra thing to take me away from who I really am.”

Cox completely changed the tenor of his voice to go deeper. Cox made that decision because if Daredevil’s hearing is so strong, it would change the way he speaks.

Jeph Loeb, head of television for Marvel, says “Daredevil” gives Marvel an opportunity to create “street level heroes.” The Avengers characters are here to save the universe. What we wanted to do with ‘Daredevil’ was move over a few blocks and down a few avenues and there’s an area called Hell’s Kitchen which is very different from the world of Tony (Stark),” Loeb says.

The result is that “Daredevil” is more of a crime drama, closer to the movie “Taxi Driver’ than one of the costumed hero tales.

Helping tell these darker stories are Elden Henson as Foggy Nelson and Deborah Ann Woll as Karen Page. He’s known for the “Mighty Ducks” movies, while she was most recently on “True Blood.”