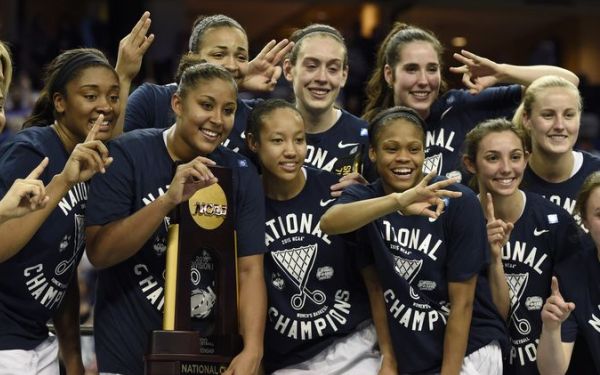 TAMPA, Fla. — The team with the roster of All-Americans and elite high school recruits was in a battle with its rival.

With the national championship at stake, the UConn Huskies were unable to do what they have done to most opponents all season. Each time the Huskies moved a few stride ahead of Notre Dame, the Irish made up some ground and put pressure on the best team in the nation.

On this night, with history before them, Geno Auriemma’s team would need a blue collar effort against a relentless opponent. It was at times sloppy and the shots didn’t fall as effortlessly as they have during this glorious season, but the outcome was the same.

For the third year in a row, UConn is the NCAA champion. The Huskies earned a 63-53 win as their experienced players stepped up and steered them to another title.

“We have to work really, really hard to make it look easy,” Auriemma said. “This is an incredible group … Every day this team just kept working and working. They deserve everything.”

It was a six-point game with five minutes left, but senior Kaleena Mosqueda-Lewis ended her career with a flourish. There was a 3-pointer and a jumper to quickly boost the lead to 11 points and Notre Dame had no response.

Mosqueda-Lewis and Moriah Jefferson had 15 points each for UConn. Morgan Tuck has 12 points, while Breanna Stewart had just eight points but added 15 rebounds.

Freshman Brianna Turner led Notre Dame with 15 points, all in the second half.

This was a closely contested game from start to finish. Notre Dame hit four of its first five shots, including a 3-pointer by Michaela Mabrey that gave the Irish a 9-6 lead 3:13 into the game. Mabrey was a well behind the 3-point arc and her shot brought Notre Dame fans to their feet.

But the UConn defense began to clamp down and Notre Dame went cold. A 3-pointer by Moriah Jefferson tied it and UConn took the lead on a layup by Kaleena Mosqueda-Lewis 6:11 in.

Jewell Loyd, who had a game-high 10 first-half points, tied it with her first basket of the game, but Mosqueda-Lewis buried a 3-pointer and the Huskies were back on top. Later, Mosqueda-Lewis took a pass from Tuck and scored on layup before Tuck’s layup made it 18-11.

But Notre Dame answered, ending its scoring drought with a pair of free throws by Loyd and a layup by Lindsay Allen. Stewart’s jumper gave UConn a 20-15 lead, but moments later she fell to the floor and left the game with an ankle injury.

With Stewart getting her ankle taped, Notre Dame cut the lead with baskets by Allen and Loyd while UConn answered with a Stokes layup.

The crowd roared as Stewart entered the game with 6:43 left in the half. UConn led 22-19 and Notre Dame was rallying.

But UConn outscored Notre Dame 9-4 the rest of the half. Tuck’s 3-pointer began the run and Jefferson scored off a drive, although Loyd scored two baskets to keep pace.

Stewart, who had eight rebounds in the half, hit a jumper, and the Huskies got free throws from Mosqueda-Lewis and Tuck to put some distance between them and the Irish.

Notre Dame was 5 of 25 shooting after its first five shots. The Irish also turned the ball over 13 times, although they did hold a 24-19 rebound advantage.

And it appeared Notre Dame was poised to make a run in the second half. Just 16 seconds in, Mabrey connected on a 3-pointer and it was a five-point game.

UConn had an answer with a 7-0 run, which included a three-point play by Tuck. Leading by 12 just over 17 minutes left in the game, UConn was putting a grip on the game. Just as they’ve done all season, the Huskies seemed ready to turn the game into a blowout with a second-half run.

Notre Dame, though, didn’t fade. Turner scored her first basket and later scored another to make it an eight-point game with 15:16 left.

Kia Nurse missed a layup and fouled Loyd on Notre Dame’s ensuing possession. Nurse went to the bench before Loyd sank a pair of foul shots to make it 38-32.

Jefferson responded with a 3-pointer. Later, Tuck hit a 3-pointer and it was a 10-point UConn lead with 11:38 left.

But again, UConn couldn’t sustain a run and Notre Dame scratched back.

Turner’s layup made it 48-42. Jefferson, UConn’s best player on the floor Tuesday, answered with another 3-pointer to maintain a cushion.

But Turner continued to assert herself. Her two baskets cut the UConn lead to 51-46. Nurse, who displayed moments of apprehension, hit perhaps her biggest shot of the season with a 3-pointer with 7:08 left. Turner and Jefferson traded baskets, and Allen’s layup for Notre Dame cut UConn’s lead to 56-50.

As the final five minutes began, the game was up for grabs. But the Huskies, so good in March, found a path to their 10th title.