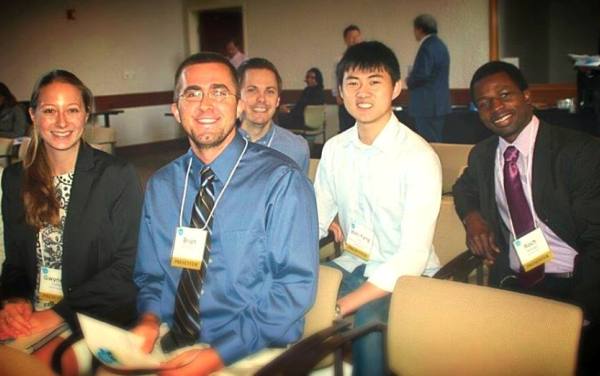 Some of the early round winners of UCLA's Grad Slam.
(Credit: facebook.com/UCLAGradSchool)

It was a simple question: What do you study? But UCLA doctoral candidate Oscar Campos started to give anything but a simple answer — he talked about cells and biology and how his research related to cancer but that he wasn't technically a cancer cell biologist. And then he stopped.

"Too much jargon," he said, sounding almost apologetic.

Avoiding technical terms and keeping things simple is the goal for Campos and more than 80 other UCLA graduate students who are participating in Grad Slam, a contest that rewards students for speaking more like laypeople and less like experts who have spent years studying technical subjects.

This is UCLA's first Grad Slam; other UC campuses have had similar programs for several years. Other universities have also prodded their students to speak in less geeky terms, including NYU, which has an annual Threesis Academic Challenge contest in which master's students explain their work in three minutes. Last year's winner was titled "So, You Fell in Love With a Machine… What Could Possibly Go Wrong?" and addressed themes in a German short story written in 1816.

The contests are part of a trend in higher education to help students speak clearly — not just at conferences with their peers who understand obscure references — but also to non-academics. After all, what good would a very long and expensive education be if graduates couldn't share what they'd learned with other students or future bosses or employees?

Students in all fields, not just the sciences, can have trouble getting their ideas across.

"Every special field has a specialized vocabulary. What's a very common term in your field might mean nothing to someone outside of it," said Suzanne Collado, an assistant director at the Master's College of Graduate Arts and Sciences at NYU who coordinates the school's contest.

NYU has held Threesis for five years after a dean saw a similar contest in Australia. The first year, about 30 students competed. That number rose to about 80 in the most recent competition.

Jon Christensen, an adjunct UCLA professor who teaches a class on environmental communications, said the problem isn't that students are inarticulate, it's more the use of "jargon and insider language that's not very useful."

To help prepare students for Grad Slam, UCLA administrators held a series of one-on-one coaching sessions and workshops. During one recent session, Allison Collins, a graduate student leading the discussion, made the other students form a line and run from the back to the front while others clapped to help the group break out of their comfort zones.

"Everyone is going to feel a little silly," Collins said. "But we never get the opportunity to do this in grad school."

Participants then gave short talks about made-up topics such as the portrayal of gun control in Disney movies. Most students responded with nonsensical answers, some more successfully than others. Alejandra Priede had to expound on the biochemistry of bubbles and started to say that the makeup of bubbles often depends on the age of the person before cutting herself off. "That was bad," she admitted.

During the contest, students have three minutes to discuss their work with the help of some visual aids.

Participants are judged on a 35-point scale that includes their clarity, vocal range and pace. Competitors began giving their talks earlier this week and will go through several rounds before the finals April 16. The winner will receive a $3,000 prize, and second- and third-place finishers will receive stipends.

Priede, a doctoral candidate in the graduate school of education and information studies, said she signed up for Grad Slam so she could test herself in different situations. She said she believes she's good at giving presentations to peers but sometimes gets nervous in front of large groups or strangers.

"I prefer to present in an environment where I feel safe, but that's why I'm putting myself outside my comfort zone," said Priede, who wants to work in both academia and the private sector.

Other students who plan on staying in the classroom as professors said they wanted to improve their communication skills because they hope it will make them better educators.

Campos said that he has had courses in which he struggled to understand professors who were too technical and that he's had the best experiences with engaging instructors.

"A lot of professors are stuck in their ways and have trouble bringing themselves to a level of people who don't have the same degree of expertise," he said.

"I care about science; oftentimes people don't understand science and that's why they're not interested or it's misrepresented…. I just want to do my part to make sure people understand it," he said.