Santa Barbara looks to ocean desalination for new water; are other cities next? 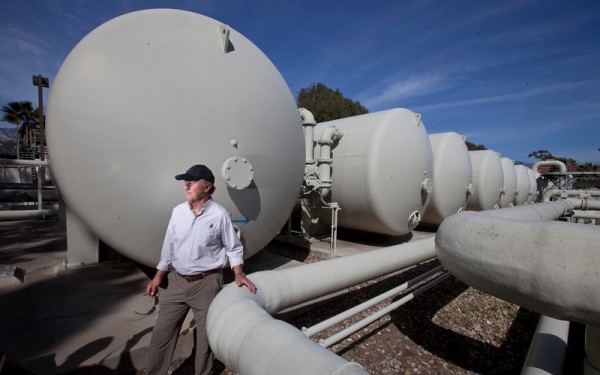 Now, 23 years after it closed, with the state entering the fourth year of its worst drought on record, Santa Barbara is preparing to reopen the plant, rekindling a debate that is spreading to communities up and down the coast: Is the state's water shortage now so dire that Californians should embrace desalination -- with its high economic costs and environmental risks -- as a critical element of a pricier water future?

The dilemma is the focus of the latest installment of this newspaper's ongoing series "A State of Drought."

"Desal is the last resort -- and we are at the last resort," said Bob Roebuck, Santa Barbara's project manager for the plan. "Our reservoirs are going dry. Our wells are dropping. This is it."

By early June, the Santa Barbara City Council is expected to vote to spend roughly $40 million to modernize and restart the desalination facility, located in an industrial area between Highway 101 and Santa Barbara's landmark Stearns Wharf.

The plant cost $34 million to build during California's last major drought in the late 1980s and early 1990s. But shortly after it opened in 1992, drenching rains returned. And because the water was so expensive to produce, the city shut down the plant three months later and sold its filters to Saudi Arabia. It has sat, closed, ever since.

In recent months, environmental groups unsuccessfully tried to convince the California Coastal Commission and other agencies to force the city to bury the pipe that draws water from the ocean to the plant, to avoid sucking in fish larvae, plankton and other species at the base of the food chain.

"Good decisions are not made when people are in panic mode," said Susan Jordan, executive director of the California Coastal Protection Network in Santa Barbara. "You don't want to wake up in 30 years and realize you've devastated your ocean economy.

"But with the drought, it is a freight train. People aren't always listening to logic."

City leaders say the costs of burying the pipe are too high and that new screens with tiny mesh on the pipe will limit any environmental harm. The town is facing an emergency, they say: Even though residents last year cut their water use 22 percent, Santa Barbara's two reservoirs are less than 30 percent full. And the area's limited groundwater is dropping fast.

There has been some public debate in Santa Barbara over reopening the plant, but far from a raging controversy. City meetings on the topic have been modestly attended. Voters approved building the plant a generation ago, and many seem resigned during today's historic drought to opening it again.

"I think it's a good idea to have for backup purposes," said Roger Nance, owner of the Beach House surf shop on State Street. "It's going to cost us a lot of money. But I've lived here since 1969 -- and I've never seen it this dry."

Santa Barbara is not alone. After years of fits and starts, California is finally moving ahead with several major desalination projects during its historic drought -- a sign that some coastal communities with few other options are willing to pay more for a reliable water supply.

A $1 billion plant in Carlsbad, north of San Diego, is set to open this fall. It will be the largest in North America and will supply 50 million gallons a day -- 7 percent of San Diego County's water supply.

The town of Cambria, 10 miles south of Hearst Castle on the San Luis Obispo County coast, began operating a small emergency $9.5 million desalination plant in November to keep it from running out of water. And officials in Monterey County this year drilled a 250-foot-deep test well at a remote beach in Marina as part of a plan to build a $320 million desalination plant to serve 100,000 residents of Monterey, Carmel and other surrounding towns by 2019.

The project still needs final approval from the state Coastal Commission and other agencies. It is proposed to replace water that state regulators ruled 20 years ago the Monterey Peninsula's water supplier, California American Water Co., has been taking from the Carmel River without proper rights.

"The additional gains we can achieve from conservation are limited," said Catherine Stedman, a Cal-Am spokeswoman. "It made sense to turn to desal after the other options had been exhausted."

Several cities have studied desalination and rejected it. Santa Clara County Supervisor Dave Cortese this week again raised a long-considered $200 million plan to build a desal plant in San Francisco Bay near Pittsburg. The proposal was shelved last year when the region's four largest water districts decided they could obtain water more cheaply through expanding water recycling, conservation programs and other means. Santa Cruz city officials in 2013 halted plans for a desal plant after environmental activists raised concerns and voters passed a measure requiring a vote of the people to approve any plant.

The Pacific Ocean is California's safety net. Even if the current drought lasts 10, 20 or even 100 years -- as some did centuries ago -- the state's major cities would never run out of water because fleets of desalination plants could be built along the coast. A majority of California residents live within an hour's drive from the ocean.

Israel currently produces half its water from ocean desalination. And other arid nations, such as Saudi Arabia, also rely on the sea for billions of gallons a year.

But they have few other options. And the costs dwarf every other way to produce water.

Huge amounts of energy are required to pump seawater at high pressure night and day through extremely fine reverse osmosis filters and membranes. Typically, desalinated water costs at least $2,000 an acre foot -- roughly the amount a California family of five uses in a year.

That cost is about double that of water obtained from building a new reservoir or recycling wastewater, according to a 2013 study from the state Department of Water Resources. And its price tag is at least four times the cost of obtaining "new water" from conservation methods such as paying farmers to install drip irrigation, or providing rebates for homeowners to rip out lawns or buy water-efficient toilets.

"If you have other options, why would you go buy the most expensive water first?" said Newsha Ajami, a civil engineer at Stanford University.

Ajami, director of urban water policy at Stanford's Water in the West program, said communities should first max out conservation, then expand recycled water and stormwater capture, going only to desalination as a last resort.

Once the cost of modernizing the Santa Barbara plant is taken into account, the water will cost roughly $3,000 an acre foot, boosting the average homeowner's water bill from $80 a month to about $108, said Joshua Haggmark, the city's water director.

"It's expensive, but it's still less than a penny a gallon," he said. "The cost to a single-family home will still be less than a cellphone bill. Without eliminating all outdoor water usage and killing all landscaping in town, desal has to have a role."

Environmentalists are hoping the State Water Resources Control Board will adopt new rules next month to require future ocean desalination plants to bury their intake lines where feasible.

Desalination will never be a viable option for farming or for major inland cities because the cost to produce the water and move it miles -- including over mountain ranges -- is simply higher than other ways to produce water, such as recycling wastewater or building new reservoirs, said Tim Quinn, executive director of the Association of California Water Agencies.

But in some coastal areas, particularly towns without significant groundwater or connections to other, larger water systems, it's becoming more realistic.

"It's a trend," he said. "It probably will never rise to be a double-digit percentage of California's water supply. It is controversial and expensive. But it will make sense in some coastal communities. If you've got nothing else, the economics are attractive."