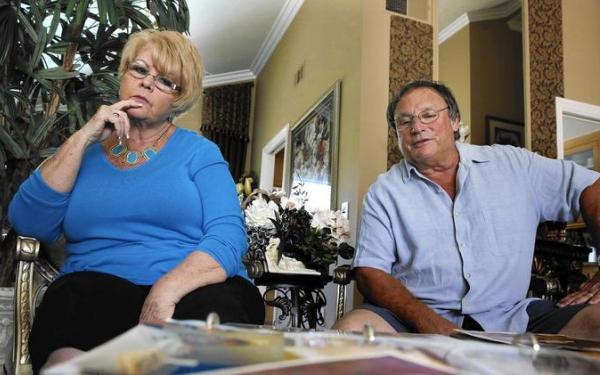 For years Ron Windell had a single recurring dream. In it, the retired Pomona homicide detective has a fresh lead in a case that had haunted him since he was a young cop — the 1981 murder of a 6-year-old boy named Jeffrey Vargo.

In the dream Windell walks up to a door and knocks. A person answers and Windell explains why he's there. And like that, the person confesses.

"And it would be over," Windell said.

The dream remained just that and Windell finally retired in 2003, the case unsolved. Every few years a new detective would give it a fresh eye and call Windell to pick his brain. But each time the case was put aside again without an arrest.

Last month, 33 years after the boy's partially clad body was found behind a pile of sand at a Pomona construction site, the latest round of DNA tests led police to the front door of a shoreline duplex in a resort town in the Idaho panhandle.

On the other side of the door was Kenneth Rasmuson, a violent sexual predator who had been twice convicted of molesting children in the 1980s.

Since his release from custody in 2007, Rasmuson has been greeted with warnings, fliers and headlines as he has drifted from town to town, finally moving into the rear home of his parents' duplex overlooking the Pend Oreille River.

Never, though, had he emerged as a suspect in the violent death of the precocious, brown-eyed boy.

It took five years before Bob and Connie Vargo could bear to change Jeffrey's room from the way it was when he disappeared. They held on to the keepsakes — his slippers, his robe, the Matchbox cars and "Star Wars" collection.

"We've adjusted as well as could be expected," Bob Vargo said.

Windell had been a cop for six years when he and his partner were called to the Pomona construction site where the boy's body was dumped. His own children were about the same age, and it hit home.

The kidnapping and slaying of a 6-year-old was big news and the pressure mounted to solve the case. More than 1,000 tips came in, but the case went cold.

Occasionally a new tip would arise or a child predator would be convicted in a similar case and would be eyed carefully as a potential suspect.

But nothing clicked and eventually Windell's partner retired, and before long, he did too. "Every homicide detective has at least one case that haunts them," Windell said. "Jeffrey was one of mine."

Last year, Pomona police Det. Jennifer Turpin called Windell. She told him she was dusting off the case again.

Not until Rasmuson's second stint in prison for the kidnapping and molestation of a 3-year-old boy in 1987 did authorities learn he had more victims than they thought.

"He had admitted … being involved in at least 10 molestations since age 18," wrote a psychologist who evaluated Rasmuson, court documents show. He also admitted to molesting a 6-year-old boy when he was 15.

Rasmuson had served time for a 1981 conviction for sodomizing and orally copulating an 11-year-old Santa Barbara boy he lured into a park by saying he needed help finding his dog.

When he pleaded guilty six years later to kidnapping and molesting the 3-year-old, he was sentenced to 17 years in prison. After completing his stint, he was transferred to Atascadero State Hospital, where sexually violent predators are treated and housed until they are deemed fit for release. Hospital officials declined to discuss Rasmuson or confirm he was ever there, citing privacy laws.

Mary Flavan, listed in court records as Rasmuson's treating psychiatrist at Atascadero, said she was barred from discussing past patients but agreed to speak in general terms.

"Very few people have not done more than what they have been convicted for," she said. "Somebody gets you for one thing and it's not all you have really done."

But it was at Atascadero, according to details of Rasmuson's treatment outlined in a court appeal granting his conditional release in 2007, that he began taking Lupor, a testosterone-reducing drug that can quell sexual urges.

After his first convictions, doctors determined that Rasmuson was smart and "extremely manipulative," capable of fooling doctors.

Still, the medical professionals said with close monitoring, family help and drugs that reduced his testosterone to a "castration level," Rasmuson was unlikely to offend again.

Out of custody, Rasmuson was required to register as a sex offender. In 2008, a judge blocked his request to move to the Antelope Valley. Public records show he spent time in Santa Barbara, Washington and Oregon before moving in with his parents in Idaho.

While Rasmuson lived quietly and mostly kept out of sight, Det. Turpin plowed through the old case and — once again — submitted the DNA evidence that had been gathered at the scene in 1981 for testing.

This time, police said, they got a hit: Rasmuson.

"She said I'm going to watch him very closely and it may be something," Bob Vargo recalled the detective telling him. She told the Vargos to wait and not say anything until she knew more.

Joyce Hartley, 84, remembered when Rasmuson moved in two doors down from her home in Sandpoint, Idaho, a resort town in the shadow of a national forest and a pair of ski resorts. Police told neighbors they were powerless to stop him from moving in but promised to keep an eye on him.

"There's nothing you can do about it and a lot of people tried," Hartley said. "We've always known what he was."

Rasmuson's home is at the end of Third Avenue, next to a public pier and a park where children spend the summer swimming.

After the DNA match, police began to watch the house. A neighbor said a detective was parked in the neighborhood for three days until finally moving in and arresting him.

"When [Turpin] finally called … she said we have him in custody and we're transporting him to the county jail — we just wanted to jump up and down and tell everybody," Bob Vargo said. "I asked her when can we tell our friends and relatives, and she said, 'You can tell them right now.'"

For Windell, it was a moment that had eluded him for decades.

"I'm glad that it happened when it happened," Windell said, "while his parents are still alive."