'How fast it grew': Old photos of Valley's birth and boom 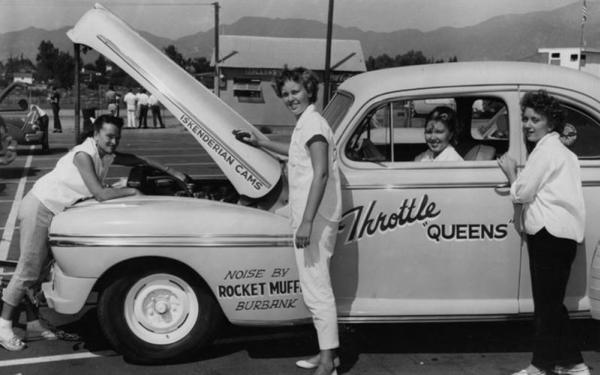 It's 1957, and a line of kids — the boys on bikes, the girls in bobby socks and saddle shoes — stretches around a newly opened North Hollywood Dairy Queen.

It's 1964, and Mr. and Mrs. Ernest E. Berry of Van Nuys celebrate their 50th anniversary. She wears a corsage, he a boutonniere, as their hands clasp a knife over a cake just as they might have done half a century before.

It's 1965, and "Mr. Arthur" curls the hair of a doe-eyed actress in the back seat of a Rolls-Royce mobile salon, the rollers as big as highball glasses.

These were the moments captured by photographers from the Valley Times, a mid-century newspaper that in small-town style managed to chronicle the birth of the San Fernando Valley and its postwar suburban boom.

It was an era marked by ribbon cuttings and freeway expansions, of new schools and shopping malls. The Valley was awash with young families settling into tract homes, and the paper documented the everyday moments of these new Angelenos: the birthday parties, the parent-teacher associations, the science fairs.

"No story was too small for the Valley Times," said Christina Rice, a senior librarian at the Los Angeles Public Library who is leading an effort to archive more than 45,000 of the defunct newspaper's photographs. "It was very much a community paper, and it really showed how the Valley went from an agricultural center to a suburb."

Christine Adolph, an archivist hired to work solely with the collection, spends her workdays alone with the photos in a library workspace between filing cabinets and aging, wooden card catalogs.

In the two years she's been at work there, Adolph has become a walking encyclopedia of postwar Valley history.

"The photos tell the story of this area of Los Angeles that often seems to have a stigma and just how fast it grew," said Adolph, a Glendale resident who says she has a new appreciation for the Valley. The early photos, from the 1940s, show ranches and farmland; within a few years, the big, open spaces were filled with houses, she said.

What's unique about the collection, Adolph said, is that because the paper focused on social life and not just on hard news, it had the kind of photos people could clip out and hang on the refrigerator.

If you lived in the area at the time, Adolph said, "you could easily come in and find a photo of Grandma leading a PTA meeting."

The photos show that in those days, as the entertainment industry blossomed, celebrities were actively engaged in their communities and accessible in a way they aren't today, Adolph said.

When movie stars big and small were named honorary mayor of the Valley's neighborhoods, they took the role seriously, the photos show. In 1964, Woodland Hills Honorary Mayor Buster Keaton posed with a large pair of scissors at the ribbon-cutting for a furniture store on Ventura Boulevard. Sherman Oaks' honorary mayor, Liberace, was photographed signing a proclamation for Brotherhood Week in 1957.

With grant money and support from the nonprofit Photo Friends, the library has been professionally archiving and digitizing the collection since 2013 and is still raising money to complete the project. A crew of people works with the collection, and, as of this month, more than 11,000 images have been digitized and made public.

Adolph and Rice have seen some of the same characters popping up in the photos over and over — local politicians, civically minded beauty queens — and have grown attached to them and tried to learn their stories.

Their favorite is Frances Muir Pomeroy, a Valley historian and preservation activist who moved to North Hollywood in 1907 and grew up on a 50-acre fruit ranch near the future site of North Hollywood High School. The library staff has found more than a dozen photos of Pomeroy, who considered herself a "Valley pioneer."

Pomeroy was often pictured at Valley social events and fundraisers in traditional pioneer gingham skirts and bonnets and carrying peaches from the time North Hollywood was known as "Lankershim, Home of the Peach," according to the newspaper captions.

"We get so excited when we see her," Adolph said. "We'll be looking through the photos, and there she'll be!"

The Times, which was published daily from 1946to 1970, was known for its large pictorial spreads. In a house advertisement for "Five good reasons why you get the finest news photography every day in your Valley Times," the paper ran the faces of five photographers.

Among them was George Brich, a young photographer and self-described "car nut" who racked up thousands of miles on his Volkswagen Beetle, Alfa Romeo and Renault while rushing across the Valley.

Brich would get three to five photo assignments each day and often drove back to the North Hollywood newsroom between each to develop the photos in the office darkroom. (A dizzying 1,172 of them are already online on the library's website.) When he covered society events, his subjects "were almost like models," grinning and posing, happy to be making it into the paper, he said.

When he first started at the newspaper in 1958, Brich hauled along his bulky and slow Speed Graphic 4x5 camera — known as the "press camera" — with its big flashbulb. But Brich was young and experimental and soon started snapping scenes with his new, smaller Leica 35-millimeter camera that could capture images more quickly and catch more candid scenes.

At first other news photographers teased him about his "little camera," but soon they started bringing 35-millimeter cameras along with their Speed Graphics, Brich said.

In his photographs, Valley State College students hoist a Monopoly board and their trophy for playing the world's longest continuous game (339 hours, 12 minutes); Bob Hope's daughter, Nora, grins at a fashion show at her family's Toluca Lake home; members of the North Hollywood Republican Women's Club blow out candles to celebrate the club's 20th anniversary.

"It was a simpler life," said Brich, 79. "You didn't have people walking around looking at their smartphones. You'd spend more time looking around, getting to know your community.

"I notice almost everybody's smiling in these pictures. When I look back on them today, I think, my God, it really was that way. I'd forgotten about that."

In 1970, the Valley Times' owner, Lammot du Pont Copeland Jr. — who also owned the Hollywood Citizen News — filed what was then one of the largest personal bankruptcies in history, and his newspapers folded.

The Valley Times' thousands of black and white photographs were auctioned off to the owner of a local print shop, later bought by Security Pacific National Bank and eventually donated to the Los Angeles Public Library in 1981.

Five years later, two devastating arson fires in the downtown Central Library destroyed or damaged more than a million books and periodicals. Many of the Valley Times photographs suffered water damage. After the library was refurbished, the photos were stored away for years in long, silver filing cabinets in the basement and mostly forgotten.

When Rice took over as head of the photo department in 2009, the photographs were stored in the original Manila folders from the newspaper office, along with acidic newspaper clippings (some of which left burn marks on the photos) and rusty paper clips.

The photos quickly showed an unexpected side of the mid-century San Fernando Valley — especially when it came to the women of the "Leave It to Beaver" era.

Rice was shocked to discover a 1961 photograph of Lucille Raport, an architect from North Hollywood — one of 350 women licensed in the profession at the time. Raport was photographed in a dress and heels, grinning, with two long, rolled-up building blueprints.

"I was expecting the housewives, the women's clubs, but I wasn't expecting Lucille," Rice said. "The era was more than we initially thought."

The women kept coming — Los Angeles Police Department Sgt. Genevieve Hauck reaching for a police car radio with painted fingernails, the "Throttle Queens" racers looking under the hood of a car they would drive on the San Fernando Drag Strip.

A 1961 photograph of the first black person to lead a major post office had the Pacoima postmaster listed only as "Mrs. James Avery." Rice and Adolph were miffed. Here was a woman being recognized for her accomplishments, and she was listed only by her husband's name.

Because they hope the archive will be used as a historical reference for years to come, they researched the postmaster so she would be properly remembered.

"I didn't want her to go down in history as Mrs. James Avery," Rice said. "Her name was Nancy."

See all the photos here.