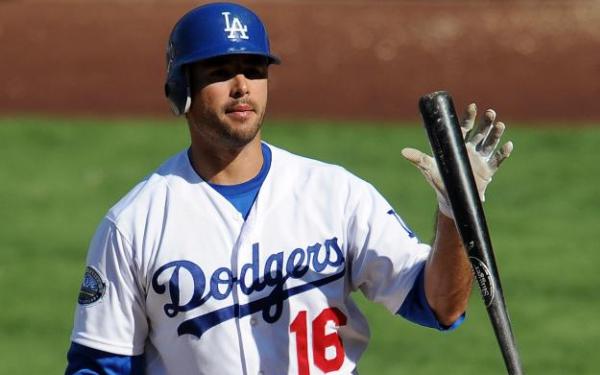 To the extent that he can, Andre Ethier isn’t dwelling so much on his current role with the Dodgers.

Clearly, he doesn’t like it. Ethier did not start any of the Dodgers’ first three games of the season against the San Diego Padres.

He can’t like where his playing time is headed, either. Because the Dodgers have three days off among their next 12, manager Don Mattingly figures to keep Carl Crawford, Joc Pederson and Yasiel Puig in the outfield.

“I try to do as best I can about keeping everybody involved in the lineup,” Dodgers manager Don Mattingly said. “It’s a little tougher early because of the number of off-days. ... As you get into the season, there are so many games, so many little nick injuries, guys need a break or a breather, it gets a lot easier as the season moves on.

“It’s a little tougher now to be honest with you. Same with JT. Trying to keep those guys in the mix. Van Slyke’s the same.”

What’s a fourth outfielder to do?

Ethier said he’s focusing on the same process that allowed him to hit .327 and reach base at a .407 clip in spring training.

“Probably the key to having a good spring is putting the work in in the cage and doing the drills, making sure you’re staying sharp with that stuff,” Ethier said. “Not getting complacent, not getting out of whack, not doing that stuff – that’s my biggest thing. I’m just keeping my drills up, keep getting my work done.”

Even though he can’t reasonably expect to start regularly since Mattingly has pledged to play the other outfielders more, Ethier isn’t expecting to stay on the bench.

Call it a case of selective denial – if it helps him hit the ball well, Ethier’s attitude isn’t likely to change.

“I’m not coming here saying ‘I’m not getting an at-bat today’ or ‘I might only get one’ and not put the work in – the quality of work in, like I’m probably going to be out there playing,” Ethier said. “Knowing that you’re not going to need to gear up for game time, you gear up more toward the fifth or sixth inning to get that at-bat, and focus all that energy toward that one at-bat.”

Ethier has three years and a guaranteed $56 million remaining on his contract.

Beachy in the pen

Pitcher Brandon Beachy is continuing his Tommy John rehab with the rest of the major league club and will travel on all the Dodgers’ road trips for the foreseeable future.

Beachy threw another 25-pitch bullpen session Tuesday, his “fifth or sixth” since he began throwing off a mound in spring training. Although he hasn’t had any setbacks so far, Beachy is trusting the process more than the results.

“I didn’t have a setback the first time until it was bad news,” said Beachy, who was still recovering from his first Tommy John surgery when he needed a second in April 2014.

The right-hander still is throwing only fastballs and changeups and does not have a timetable to be pitching in games. The typical recovery range for Tommy John patients is 12-18 months from the surgery date.

“I put my faith in the program they’re laying out for me,” Beachy said. “I’m looking forward to getting people out, contributing to this ballclub. Everything’s out of my hands.”

Beachy signed an incentive-laden, one-year contract Feb. 21 at a base salary $2.75 million and an option for 2016.

Pitcher Clayton Kershaw needed a root canal procedure as a result of the line drive that hit him in the face during a Cactus League game on March 20. ... Mattingly said that Hyun-Jin Ryu reported no issues after playing catch Tuesday, the first time he’s thrown a baseball since he was shut down on March 23. ... Mattingly hasn’t decided who will start against the Seattle Mariners on April 14, the first time the Dodgers will need a fifth starter. Minor leaguers Scott Baker and David Huff are among the candidates, but Mattingly said “no matter who we probably end up starting, it’s going to be a load on our bullpen.”