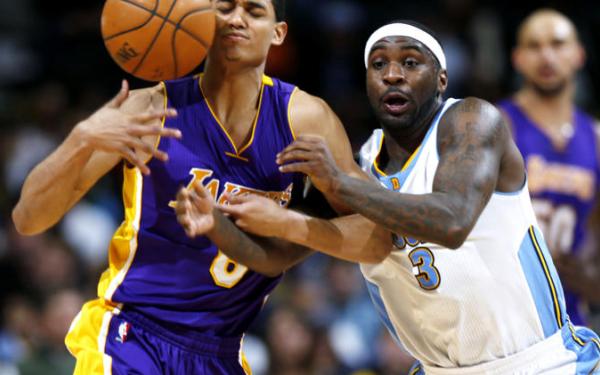 The Lakers are well past the Save Our Season phase.

The losses stopped stinging them long ago, the feeling now merely a faint Monday morning headache.

If incentive is needed for their final four games, history can be dialed up after yet another loss, 119-101, Wednesday against the Denver Nuggets.

After seeing their second half Wednesday at Pepsi Center, two words came to mind.

The Lakers were down four at halftime but trailed by 23 after three quarters.

Rookie Jordan Clarkson had a rough start and the Lakers were plenty pliant on defense, allowing 93 points through three quarters.

Coach Byron Scott tried to search for motivation. Something. Anything.

Jeremy Lin didn't play because of a sore left knee and planned to have an MRI exam Thursday. It left the Lakers with an all-rookie backcourt of Clarkson and Jabari Brown, with journeyman Dwight Buycks as their only backup.

Veteran big men Jordan Hill and Carlos Boozer sat out despite being healthy.

In the all-important lottery watch, the Lakers won't fall below Orlando, the NBA's fifth-worst team, but remained two games better than third-worst Philadelphia, which faces more losing with end-of-season games against Chicago, Milwaukee and Miami.

Nothing is official until May 19, but the Lakers currently have a 17.2% chance of falling to sixth or seventh in the lottery and forfeiting their first-round pick because of the Steve Nash trade. On the plus side for them, there is a 37.8% chance of moving into the top three, 11.9% specifically for the No.1 overall pick.

The lottery-bound Nuggets were obviously better than the Lakers on Wednesday.

"They just started hitting threes," said Clarkson, who finished with 21 points on seven-for-18 shooting and added nine assists. "We weren't making nothing."

If the Nuggets (29-49) looked fresher than the Lakers, they were.

The Lakers didn't arrive at their Denver hotel until 4 a.m. Wednesday after losing to the Clippers on Tuesday night. The Nuggets, on the other hand, hadn't played in four days.

The Lakers already set a team record for most losses in a season this week, topping the 55 they had a year ago.

They have four more games to prove they're not the worst team ever in their long and storied history.