By Will Leitch - Bloomberg News (TNS) 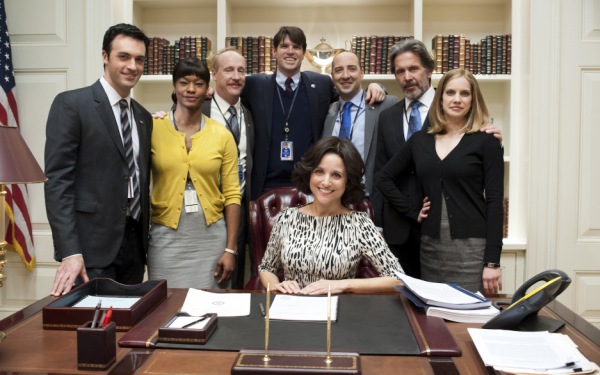 I’m pretty sure “Veep” is a corrosive, rotting influence on the nation’s collective view of American politics — and considering how corrosive and rotting that view already is, that’s saying something. When “Veep” premiered in 2012, many political sorts lambasted the show partly for its cruelty and profanity but mostly for its lack of realism. This was not just your run of the mill “that’s not how you pass a bill!” pedantry either. They were angry because it was so mean.

Eleanor Clift wrote, “if the aim of this show is to get viewers to disrespect everybody in elected office, mission accomplished,” and Slate’s John Dickerson (whose idealism and faith in the goodness of his fellow man I generally find appealing and refreshing) said that “a show that’s so soaked in cynicism about politics as a work of art smacks as lazy.” On Slate’s Political Gabfest, Dickerson expanded on that thought, saying that the show ignored that the vast majority of people who work in politics, the grunts who actually do much of the work, do so out of a legitimate sense of civic obligation and real love for their country. “Veep,” which kicks off its fourth season on Sunday on HBO, is the furthest thing from “lazy,” but otherwise, I couldn’t disagree with any of this. “Veep” focuses on only the most venal, opportunistic side of politics and those who work in it, and if all I knew about politics I learned from “Veep,” I would crawl in a hole and never vote the rest of my life. Of course, down in that hole, despairing about the state of American discourse and government, I’d still be laughing my tail off.

“Parks and Recreation” made you laugh, but it also wanted you to feel optimistic about both politics and the human condition; “Veep” has no such lofty aims. It just wants to make you laugh. It has chosen to do so by tossing as much bile at you as possible, but that’s OK, because that bile comes from Armando Iannucci, the Master Bard of Bile, the sharpest, most profane humorist of our time. Iannucci has been known for satire, from “The Thick of It” to his Oscar-nominated screenplay for “In the Loop,” which managed to vivisect British politics and American warmongering in a way that made you feel elated by the madness of the wordplay rather than depressed by the worldview. Iannucci doesn’t try to convey the world as it is; he conveys the world as we’re terrified it might secretly be, which ironically might end up more truthful but definitely ends up a lot funnier. “In the Loop,” in particular, doesn’t really show politicians as horrible humans trying to destroy everything or as good-hearted people trying to make a difference as it does show them as a bunch of vain buffoons terrified of their shadows who end up sleepwalking us into world wars. They’re the idiots in every office everywhere, except this office is in charge of earth.

“Veep” struggled early on because Iannucci didn’t quite understand the intricacies of American politics as well as he did British politics; it was impossible, at times, to suspend your disbelief that any of these people could get jobs anywhere. That was particularly true for Vice President Selina Mayer, who, as played by Julia-Louis Dreyfus, was a little too much of a buffoon to convince us she could get elected vice president of her household, let alone the country. A show like “Veep” doesn’t need to be “real,” but it doesn’t need to be so cartoonish that it takes us out of the narrative; the first season, you wondered how if any of the Veep’s staff, including the Veep herself, could figure out how to write their name in the ground with a stick. After the first season, Iannucci, Louis-Dreyfus and their staff (including executive producer Frank Rich) made a few tweaks, most notably playing up their star’s natural charm and increasing the competence level of everyone on the show: We had to believe they were something above a drooling moron in order to truly appreciate their inevitable failures.

And what failures there were! In many ways, “Veep” is an ode to failing upwards. No matter how badly things keep getting screwed up, Selina Meyer stays in the picture, eventually (and Season Three spoiler here) surviving a presidential-campaign- ending gaffe (bad-mouthing an influential Iowa reporter right into his iPhone) by getting … bumped up to president when the current office holder resigns in scandal. The moment when Selina and her aide Gary realize that she’s about to become the leader of the free world is a wild, giddy glimpse of insanity.

That strikes me as an entirely appropriate response to learning you are about to be given the nuclear codes.

That’s not how any actual campaign would work, but who cares. It’s freaking hilarious, and as the show has matured, it has learned that as long as it ties its plot to something real, you can have free reign to be as dark and knockout uproarious as you want. “Veep” has great takes on Google-esque technology cult corporations – Selina asks if they have bathrooms in their antiseptic, Borg-like office or if “you just upload your crap to the Cloud” – gun culture and the careerism that runs every organization from media to the military, but it never preaches about any of it: It’s too busy having incredibly smart, witty and utterly soulless people ripping the bejeezus out of each other. There truly is nothing like a “Veep” insult.

The supporting cast is deep with experienced male comic actors (Tony Hale, Matt Walsh, Kevin Dunn, Reid Scott, Gary Cole) clearly relishing the opportunity to bite off Iannucci’s kissoff lines, but for my money, the best two roles are the two women in charge. Anna Chulmsky, a former child actor (she was My Girl!), is the perfect straightwoman as Selina’s chief of staff, work-obsessed, deeply unhappy and yet the smartest person in the room at every moment. She has mastered the reaction shot to the dolts around her.

But this show belongs to Louis-Dreyfus, who has supercharged her entire career with her fearless, utterly committed performance as Selina. Watching her do a tour de force every week, mastering Iannucci’s verbal gymnastics while also further establishing her physical comedy skills (remember Elaine’s dance!) makes you wonder why we spent so much time paying attention to Jerry, George and Kramer. Louis-Dreyfus is as skilled a comedic actor as we have working today, and this is the role where she finally gets to show it.

This year features the addition of “House’s” Hugh Laurie, finally not doing an American accent, and should further track President Meyer’s attempts to hold onto her office. It may resemble America’s actual electoral system, but probably not. I hope not. “Veep” is a show so funny and so relentless that trying to tie it to the actual world of politics would be perverse, missing the point entirely. If politics were actually like this, the whole world would explode into flames. But hey: What a way to go.