'Game of Thrones': Why everyone, and their mother, is watching HBO's fantasy epic 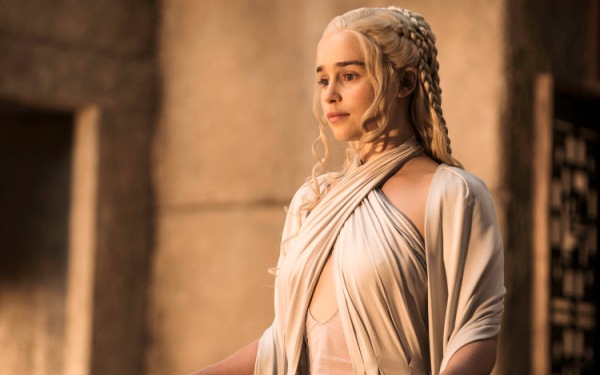 Author George R.R. Martin's imagination seemingly has no bounds. But even the man whose fantasy novels inspired HBO's "Game of Thrones" could not have envisioned how huge the show has become.

While making his way down the black carpet during last month's glitzy San Francisco premiere ceremony for Season 5 of "Game of Thrones," Martin marveled at the extensive pack of journalists and the throngs of screaming fans lined up outside the War Memorial Opera House.

"It's crazy. There are more of you every year," he exclaimed to a reporter who wondered if Martin ever thought his tales about vicious power struggles in the mythical realm of Westeros could generate such a clamor.

"I would have been totally out of my mind if I expected this," he said. Indeed, when it comes to fantasy on television, expectations typically are modest. The genre, after all, tends to appeal to a niche demographic made up of teen fan boys and/or self-described "nerds." But "Game of Thrones" has managed to lure both rabid devotees who devour Martin's bulky books and casual viewers who never will.

Last season, its average gross U.S. audience surpassed 18.4 million to wrest HBO's all-time ratings crown from "The Sopranos." And now, the show, which airs internationally in 207 territories, is ascending into a pop-cultural stratosphere usually occupied by only the most beloved of movie franchises, such as "Star Wars" and "Harry Potter."

How did this happen? How did a sprawling, often confounding saga crammed with sword-wielding knights, fire-breathing dragons, devious queens and bed-hopping miscreants attract such a massive following? We sought some answers from Martin and other fans and experts.

During the 1980s, Martin was a writer on fantastical shows such as "Beauty and the Beast" and a remake of "The Twilight Zone," which aired at 8 p.m. and were considered "kids' stuff" by their network programmers.

But on premium pay-cable, "Game of Thrones" co-executive producers David Benioff and Dan Weiss were free to follow Martin's lead, dirtying up the genre and blurring the moral lines while blending graphic sex and violence in with sinister political intrigue, action-thriller pacing and dark humor. Definitely not kids' stuff.

"HBO has transformed every genre they're ever done," Martin says. "There had never been a gangster show like 'The Sopranos,' or a Western like 'Deadwood,' or a fantasy series like ours. We've been able to show that fantasy can be just as sophisticated and adult and complex as 'Mad Men' or 'Breaking Bad' or any other great show on television."

From the silver-tongued imp Tyrion Lannister (Peter Dinklage) to the blonde dragon queen Daenerys Targaryen (Emilia Clarke), the show is bolstered by a vast gallery of compelling, rounded characters.

Rachel Drake and Nico Clothier, who oversee a student-run class at UC Berkeley called "Game of Thrones: Alliances, Power and Strategy," say that the characters in Martin's story don't adhere to black and white labels, nor is there one purely likable hero at the center of it all.

"Instead of having a Prince Charming or the perfectly crafted heroine, you follow the lives of many intriguing yet flawed characters," Drake says. "(Viewers) want to feel like they are witnessing realistic characters, not some contrived world where the perfect person always gets exactly what they want and saves the day."

Adds Clothier: "The shades of gray and the humanity within the characters are what set the story apart. It might be easy to judge someone initially from one perspective, but (he or she) may not always be the clear-cut evil beings they appeared to be."

In Season 1 of "Game of Thrones," when a main protagonist -- Eddard Stark (Sean Bean) -- suffered a horrific beheading, viewers were put on notice: You now really have no idea what is going to happen, or who is going to survive.

The stunning plot twist defied decades of TV tradition and sent the show off on an unpredictable narrative course that has been littered with several subsequent bombshells, including Season 3's notorious Red Wedding bloodbath.

"The normal convention of most dramatic stories involves an arc where a hero rises up, faces great adversity and overcomes that adversity," writes San Francisco author Ben Parr in his new book, "Captivology: The Science of Capturing People's Attention." —‰'Game of Thrones' burns that playbook like an invading fleet in King's Landing. ... Research shows that we are preprogrammed to pay attention to anything that is out of place or violates our expectations. That's why shows like 'Game of Thrones' continue to captivate us -- they don't stick to the conventions we expect."

April Neale, a writer for the Monsters & Critics website, insists that the strong and often unorthodox females who populate "Game of Thrones" account for much of the show's mass appeal.

"Martin is one of the few male fantasy writers that can artfully write dialogue and create female characters that I will invest in," she says.

Although the story is set in an archaic, sexist society, some of its standout characters are women who exude strength and natural leadership qualities while overcoming gender stereotypes, she says. Brienne of Tarth (Gwendoline Christie), for example, is a fierce warrior whose swordsmanship is a match for any knight. Daenerys commands a huge army (as well as dragons). And the young Arya Stark (Maisie Williams) is a plucky, take-no-guff survivor.

"They're incredible, compelling and interesting, and none of them is overly sexualized. ... This is a brutal world," Neale says. "Women are more marginalized because of their sex and the brute-force times. (But) they're navigating that world. They are singularly focused on their goals without getting distracted by men, and they are relentless in their pursuit for their respective missions."

At its heart, "Game of Thrones" is about power -- the plots to seize it, the desperation to keep it and the awful penalties that come with having too much of it, or not enough.

Paul Levinson, a professor of communications and media studies at Fordham University, believes that watching the saga's slew of would-be rulers attempt to lie, cheat and murder their way to the top keeps viewers hooked.

"The key to the show's success is the political complexity of its story lines, which do for fantasy what 'House of Cards' does for politics in Washington," he says. "The intensity, intricacy and passion of its machinations put 'Game of Thrones' almost in a Shakespearean category, with players who are at once larger than human but appealing because of their vulnerabilities and foibles. The result is not only fantasy, but high, and even realistic, drama."

Quite simply, nothing on television can compete size-wise with "Game of Thrones," a show that juggles multiple countries (including Spain, Croatia and Ireland), more than 30 cast members, and elaborate props, costumes and special effects.

Mission accomplished. Visually addictive and artfully crafted, "Game of Thrones" allows viewers to escape to a world that feels both real and magical, and completely mesmerizing.

It's a big show that appears poised to only get bigger.

TV Time
(Almost) every show coming to TV this summer. And 29 that aren’t
301 views