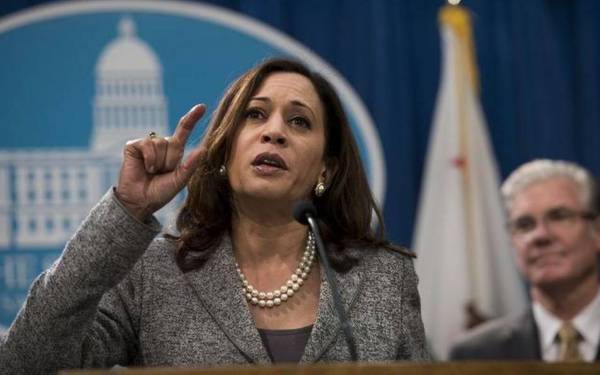 California Attorney General and U.S. Senate candidate Kamala Harris signed on to a letter to Education Secretary Arne Duncan Thursday that asks the federal government to wipe away the debt amassed by college students targeted at the non-profit Corinthian Colleges, Inc.

Harris was joined by the top law enforcement officials in eight other states in seeking forgiveness for the debt students amassed at Corinthian.

“We, the undersigned Attorneys General of Massachusetts, California, Connecticut, Illinois, Kentucky, New Mexico, New York, Oregon and Washington, write to urge the Department of Education to immediately relieve borrowers of the obligation to repay federal student loans that were incurred as a result of violations of state law by Corinthian Colleges, Inc. (‘Corinthian’),” the letter states. “We also write to request that the Department work with state attorneys general to establish a clear system for student borrowers to seek relief from the Department — as allowed under statute, Department regulations, and loan terms — when schools break the law.”

The largest chain of for-profit colleges in the country until 2014, when it shut down in a deal with the Department of Education, Corinthian is alleged to have lured students into loan agreements with false and misleading claims. The letter cited those allegations as well as the lawsuits brought against the company by several states and the Consumer Financial Protection Bureau.

“These cases against Corinthian have unmasked a school that relentlessly pursued potential students — including veterans, single parents, and first-time higher education seekers — promising jobs and high earnings, and preying on their hopes in an effort to secure federal funds. Intemal Corinthian documents even describe how its marketing strategy was geared toward prospective students who were ‘isolated,’ ‘impatient,’ had ‘low self-esteem,’ had ‘few people in their lives who care about them,’ were ‘stuck,’ and were ‘unable to see and plan well for the future.’”

In December, Sen. Elizabeth Warren, D-Mass., organized a letter to the Department of Education that was signed by 12 of her colleagues seeking the debt to be forgiven.

“When students take on loans to pay for college,” the senators said in their letter, “they are making a serious financial decision that will affect them for years to come…If colleges fail to hold up their end of the bargain — if they break the law in ways that bear on their students’ educational experience or finances — students should not literally be stuck paying the price.”

A group of roughly 100 students have declared that they will not re-pay their loans taken out to pay for their education at Corinthian Colleges. Consumer watchdogs told The Wall Street Journal that the school set its fees and tuition for a bachelor’s degree at $60,000 to $75,000 in order to force students to take out loans. As a result, Corinthian then also received a cut of the lender’s fees.